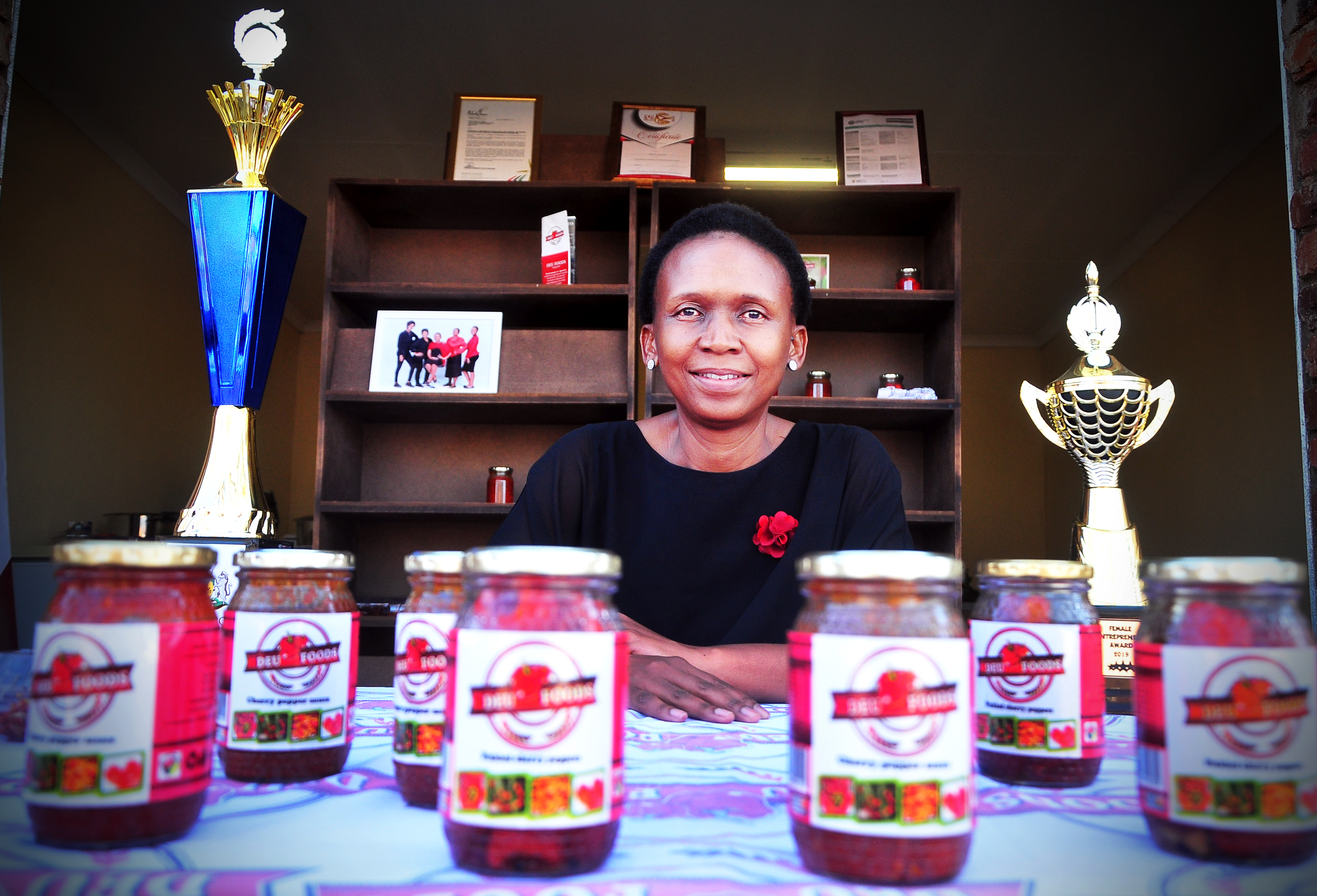 Agro- processing remains in the hands of big business but Limpopo entrepreneur and farmer
Tebogo Maepa decided to take the road less travelled when she ventured into the business
of cherry pepper production.

Maepa who leads the 100% black female owned Deutronomeo co-operative which is also known as DEU foods was recently crowned the Top Female Entrepreneur in the Female Farmer of the Year awards under the processing category at the local, district and provincial levels. The local and provincial levels each, presented her with R20 000 and R150 000 respectively. According to the department of agriculture, forestry and fisheries the agro-processing industry contribution to the real value added (GDP) by the manufacturing sector and the economy accounted to 32.2% and 4.4% respectively in 2016.

Deutoronomeo, which started operating from a house kitchen specialises in plant and agro-processing of cherry pepper sauce, crushed cherry pepper and pickled cherry pepper which is a delicacy enjoyed mainly in Europe and by the rich. It also produces a variety of organic vegetables including cubed frozen beetroot. Maepa says they decided to plant unique crops with the main aim of lengthening the food’s shelf life.

“We also want people to eat healthy so much that when our food is preserved, health is not compromised. In other words, our food has some health benefits,” Maepa said.

Having always wanted to empower women, in 2009 Maepa left her librarian job and along with some women whom she had worked with at her previous office including her house helper, the co-operative was finally established in 2014.

“I realised that these women were struggling in their homes and decided to propose the idea of starting the co-operative as a side hustle,” she said.
“We then bought a 8.6 hectares plot. When the opportunity to plant cherry pepper implemented by the department of agriculture presented itself, we became interested,” she told Mukurukuru Media.

Without any farming skills in hand to get the business running, the group was trained by amongst others the department of agriculture, Small Enterprise and Development Agency (SEDA) and the Polokwane local municipality.
Maepa credits the department of agriculture for helping the co-operative get moving once they had started with planting until completion. At the same time, it also connected them (the co-operative) to a supplier in Germany. But due to unforeseen circumstances which always seem to be inevitable in the business world, the deal fell through.

“The whole experience pushed us to enter into the agro-processing stage,” she said.

Selling their produce locally, the co-operative also experienced a challenge of accessing the market. Through help from the Limpopo Economic Development Environment and Tourism department (LEDET), they started exploring markets at supermarkets such as Spar and Pick ‘n Pay.

The ladies funded their business from their own pockets by taking a risky move, investing more than R350 000. When various institutions such as the department of trade industry (DTI) and SEDA saw their determination and passion, they came on board to assist.

“SEDA helped us to buy all the materials. By the grace of God, DTI has helped us with the Co-operative Incentive Scheme (CIS) skills boosting R350 000. We also received a warehouse which helps us with the training in terms of how food is handled,” she said.

Deutronomeo has been credited with a health certificate from the University of Limpopo’s laboratory.

It comprises of an office where paperwork is done, a plot for planting and a warehouse for processing which was supplied by the Polokwane municipality.

Currently farming on the 2 hectares plot, it employs five women with plans to add one more. It also has male employee who deals with paperwork. During the planting and harvesting season the enterprise creates up to 200 part time jobs.

Maepa says the co-operative has managed to stand the test of time because they agreed from the beginning that hard-work should be the core fundamental.

“Some of the people we started with are no longer with us due to laziness. Currently we have people with fresh ideas including the youth. Our agreement is that if you don’t work, you don’t eat,” Maepa said. – Mukurukuru Media