A desire to expose injustice 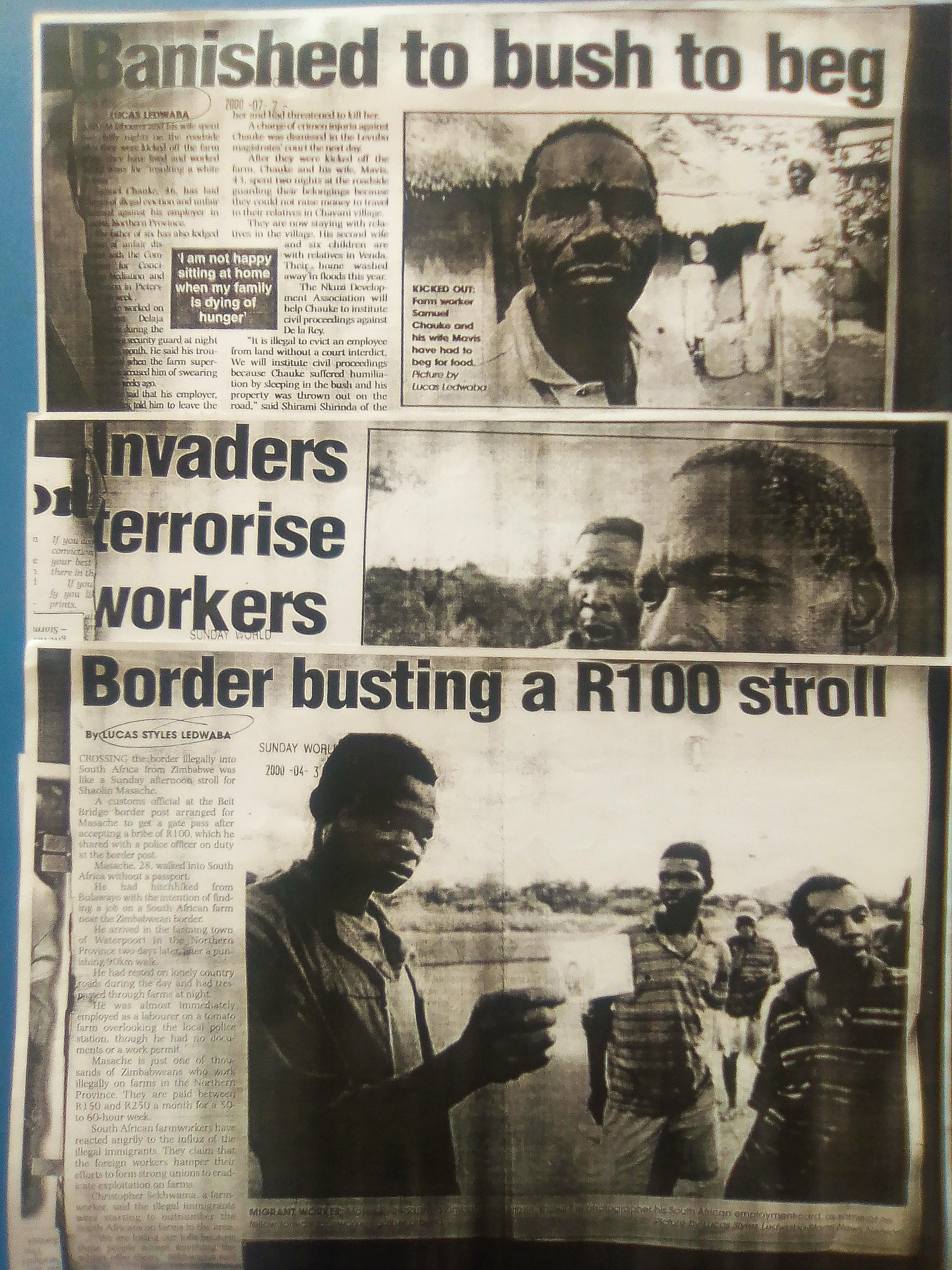 ‘Crossing the border illegally into South Africa was like a Sunday afternoon stroll for Shaolin Masache. A customs official at the Beit Bridge border post arranged for Masache to get a gate pass after accepting a bribe of R100, which he shared with a police officer on duty at the border post. Masache, 28, walked into South Africa without a passport…He arrived in the farming town of Waterpoort in the Northern Province two days later after a punishing 90km walk…

He was almost immediately employed as a labourer on a tomato farm overlooking the local police station, though he had no documents or a work permit…’
This article, published by the Sunday World on 3 April 2000 was one of a series of articles I wrote on the influx of desperate Zimbabwean migrants into the Limpopo Valley area, where they were hired and grossly exploited and abused by white farmers.

This situation also led to tensions between SA farmworkers and the Zimbabweans, accusing them of encouraging exploitation of farmworkers and sabotaging efforts by farmworkers to organise under workers’ unions and demand better pay. After these articles were published the SA Human Rights Commission held hearings into human rights abuses in the area and elsewhere across the country’s platelland.

Then, writing under Mukurukuru Media’s predecessor Storm News Network which I founded earlier that year, I was driven by a strong desire to expose injustice, human rights abuses and exploitation especially in rural areas and farms. It was punishing work which included lots of travel, sneaking into farms and sleeping on the roadside in a sleeping bag on the backseat of my car, using an ancient Panasonic laptop, Minolta SRT101 and floppy disks…

It was emotionally draining work too, being exposed to the most degrading circumstances and incidences of blatant human rights abuses people were subjected to on these farms – plus the sheer arrogance of white farmers who saw these black people as worth less than the cabbages they cultivated.

The SAHRC hearings made me realise the importance of this kind of journalism and drove me to work even harder to expose human rights violations and exploitation. But the biggest motivating factor was when meeting these exploited people in far flung areas of the country, you saw the hope in their eyes and their expression of surprise that at least they were not completely forgotten.

In a story published under the headline ‘Human beings treated like animals’, also published by the Sunday World on 7 March 1999, Zimbabwean migrant Brian Khumbula articulated the suffering they were subjected to on the Limpopo Valley farms in the following words:

‘We cannot complain about our miserable lives. If we do, our employers have threatened to throw away our documents and tell the police to arrest us because we are ‘border jumpers’.

Khumbula was recruited to work on a farm in Alicedale. He was promised a salary of R500 a month plus free working accommodation. The agent who recuited him organised a three month work permit under a special dispensation between the SA and Zimbabwean governments. But after a month of back breaking toil on a vegetable and citrus farm, he was paid only R180 and a 7kg bag of mielie meal. He did not ask why he was not being paid R500 as agreed.