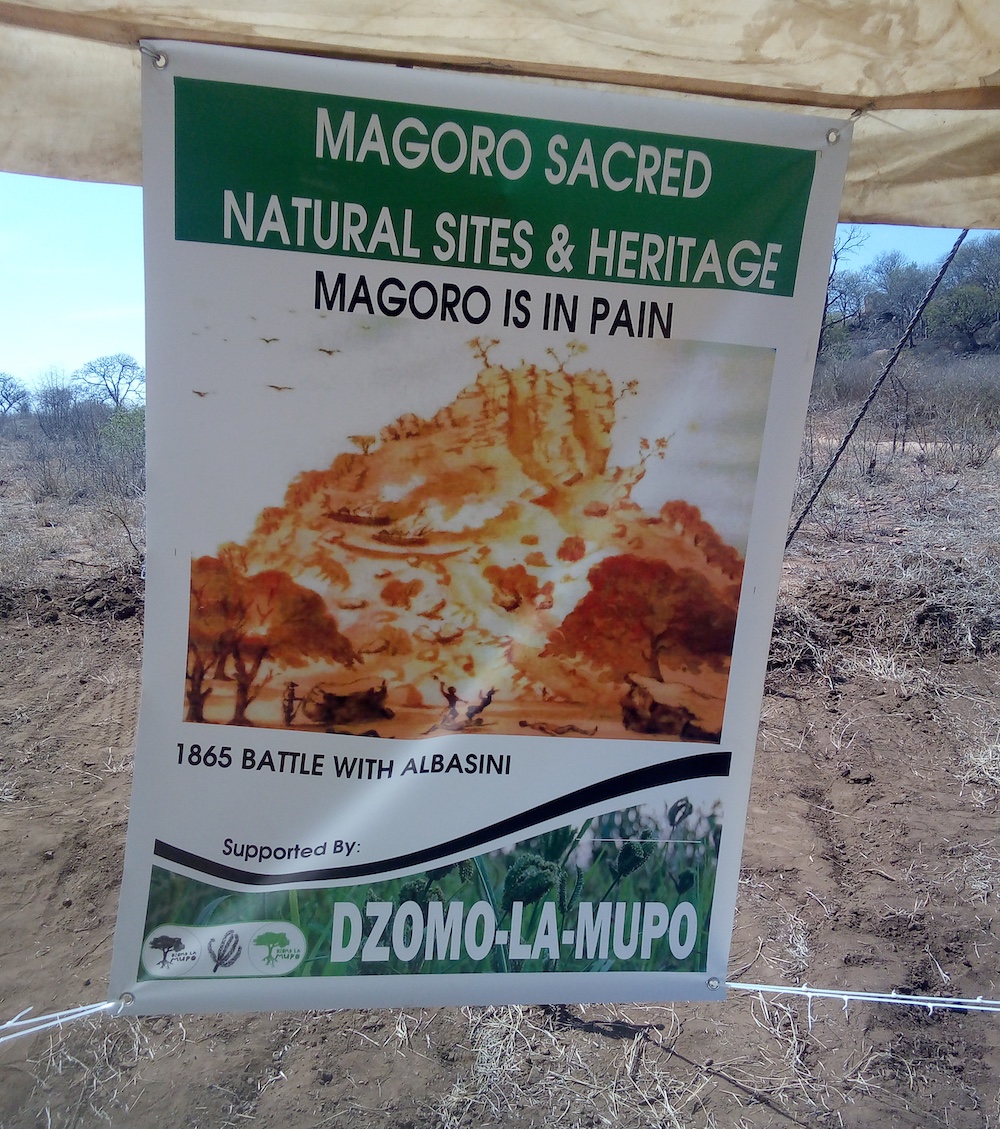 The Magoro clan says their mountain which constitutes the Zwifho Zwa Ha-Magoro, a sacred natural site where the they had always performed spiritual rituals and communicated with their ancestors, is neglected since they were forcibly removed in the 1860s.

Now the clan seeks recognition and want to claim their heritage.

It is situated at the dusty and rocky rural area of the north western portion of the former Tsonga homeland of Gazankulu, now called Tiyani ka Magoro, in Limpopo.

According to Badza Magoro, chairperson of the Magoro committee, fighting for the protection of the zwifho, the clan from the Mbwenda royalty originated from the Magoro village in the 1860s.

But when a group attacked and invaded the site following Joao Albasini and General Nwa-Manugu’s instructions, the clan was forcibly removed. Nwa-Manugu was the commander-in-chief of Albasini’s Tsonga army.

They had no choice but to spread out into areas such as Ga-Mamaila, Masakona and Olifanshoek, ultimately weakening their strength as a nation.

Therefore, the sacred site was left without anyone to look after it, Magoro says, leading to “trespassing and uncontrollable movement into the scared natural environment”.

“Our shango (territory) is equivalent to Canaan – a promised land of milk and honey found in the Bible given to Abraham and his descendants by God, because it has things that cannot be found in other places. It is made up of trees such as Mikashule and the Lisananga soil, which is fertile and rare that throughout the entire continent of Africa, is only available in our territory,” he says.

Magoro adds zwifho is a respected place that is seen as holy and it is not possible for it to be left unprotected by its custodians.

“Back then, this place

was full of bushes symbolising the ever-ending occurrence of rain and mist. Animals were also vast. There was also the tshisima tsha vhadzimu – stream for the gods which made us connect with our vhadzimu [the gods],” he says.

Some of the activities that take place at the zwifho which the clan disapproves of include members from various churches fasting at the mountain, and the noise during their prayers.

“They leave various things which leads to pollution at the site. Some traditional leaders come with patients for healing and leave resources such as razor blades and nwendas – brightly coloured Tshivenda garments bearing intricate square designs – which make the gods angry,” the chairperson says.

“We don’t just want anyone entering because zwifho is a natural scared site,” he says.

In an inaugural lecture by Professor JCA Boeyens with the University of South Africa’s Department of Anthropology and Archaeology, the Magoro Hill demonstrates that even deep into the nineteenth century, the documentary record on African societies is often patchy and has to be augmented by oral and material evidence.

Titled The Entangled Past: Integrating Archaeology, Oral Tradition and History in the South African Interior, the lecture reveals that in August 1865, the Magoro hill, the capital of a Venda chiefdom south of the Little Letaba River was the scene of a tragic encounter.

“An armed force consisting of some 60 Trekkers and about 1000 Tsonga militia besieged the mountain stronghold. The ostensible reasons for the attack were chief Magoro’s failure to pay his tax and his support for Makhado, the Paramount chief of the western Venda, who was embroiled in a conflict with the Schoemansdal community,” says the lecture.

When the Trekker commando reached the hill on 8 August, it had already been surrounded by the Tsonga force and as a result the Venda were cut off from the nearby river.

Negotiations about the payment of tax and the surrendering of guns failed and the chief’s son alongside one of the two councillors who accompanied him to the laager were put to death.

The hill was eventually captured on Sunday, 13 August 1865.

“More than 300 occupants of Magoro Hill lost their lives in the encounter. The returning commando also carried off more than 200 cattle, as well as a number of young women and 120 children. They were taken to the farm of Joao Albasini, one of the leaders of the Trekkers,” the lecture reveals.

Presented in November 2011, Boeysens cites that except for the fact that Magoro was a tributary chief who annually had to pay tax to the Trekkers, the documentary archive for the period before the attack is largely silent about this community.

“The oral record on this contact period site is equally disappointing and it also recounts that the hill was uninterruptedly occupied by the Magoro community until they were uprooted during the creation of the Gazankulu homeland,” Boeysens says.

Dzomo la Mupo – which translates to Mouth of the Earth – is an organisation that fights for cultural practice and preservation of sacred sites. It is founded by health practitioner Dr Mashudu Dima and his wife Mphatheleni Makaulule. They have been at the forefront of helping the Magoro clan get protection for their sacred site.

Makaulule, wearing a Dzomo la Mupo green T-shirt with a sky-blue towel that has off-white patterns wrapped around her waist, covering her multi-coloured nwenda beneath, speaks enthusiastically about the form of spirituality she was born into.

A Master’s student in Indigenous Knowledge Systems at the University of Venda, she says as preservers of indigenous knowledge, they want to practice their spiritual rituals with freedom.

Makaulule alleges that some people say they practice demons when they talk about the vhadzimu (gods/ancestors).

“We want the same liberation that exists to allow us to practice our spiritual rituals. We can’t say we have rightfully taken the country back from colonisers if zwifho is not considered,” she says.

“The government talks about the land claim and its emphasis is on land to plough fruits and vegetables but the issue of zwifho is not taken into account. In fact, it is not taken seriously,” says Makaulule.

Makaulule says they want sacred sites to be recognised since many rivers are now dry because they are not getting the respect they deserve.

Nkosazana Machete, manager for heritage protection at the SAHRA, the statutory organisation established under the National Heritage Resources Act of 1999, says Section 29 of the Act highlights provisional protection of sacred sites, granted for only two years.

“But we issue out provisional protection at places where there are mining activities,” Machete says.

However, as the national administrative body responsible for the protection of South Africa’s cultural heritage, Machete also says SAHRA is mandated to protect sacred sites which are being vandalised.

“If you see a person vandalising, you are mandated by the Act to open a case against that person,” she says.

“Also, as SAHRA, we are mandated to call a meeting with the community including the chief to gather all the people under his ruling and a person who has the knowledge of what transpired back then so that they get to understand the importance of the mountain. Primarily, they are vandalising the mountain because they do not understand and care about its importance,” Machete says.

Machete also acknowledges that on 10 September 2012, the institution received three nominations for grading three sacred sites including the Magoro Mountain from Dima.

“We have received so many nominations even ones from outside the country and we have talked and held workshops trying to amend the act but it takes too long,” she says

Machete adds when SAHRA grade and declare a site a national heritage, ownership has to be disclosed.

“If the ownership part is not resolved, we cannot assist in grading and declaring a site. Firstly, there must be cleansing for the mountain, verification and rectification of the ownership and also highlight the boundary. We need to have those,” she adds.

The National Heritage Resources Act of 1999 highlights that there are three types of grades namely Grade I, II and III and SAHRA, in consultation with the Minister and the MEC of every province, must by regulation establish a system of grading of places and objects which form part of the national estate, and which distinguishes between at least the categories.

Resources personnel of the clan Sigwavhulimu Magoro says as the committee they would further engage with SAHRA and other relevant structures on a way forward. – Mukurukuru Media