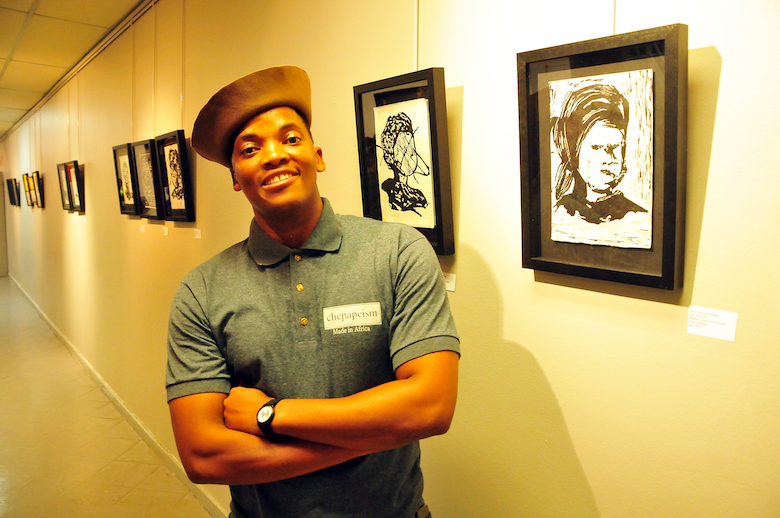 Lucas Ledwaba (LL): What has been your experience with the literary works and life of Prof E’skia Mphahlele? What influence has Mphahlele the author had on your role as an artist and life in general?

Chepape Makgato (CM): I had encountered the work of the late Professor Es’kia Mphahlele for the first time back when I was in high school through a short story called The Coffee-Cart Girl. I was mesmerised by the fact that a black African wrote such a powerful story which animated the lives and conditions of black people during apartheid era.  His work influenced my African consciousness and activism perspectives. The art centres that he became part of and even those he was the founder member such as Mbira Art Centre in Nigeria inspired me to start Samanthole Creative Projects and Workshops in 2010. He believed that artists should rely on their work for survival, meaning that they have to extend their reach beyond one discipline in the arts.

LL: Do you have a favourite work by the author and what is it you like about this particular title?

CM: I particularly love his work Father Come Home where he presents to the reader a nostalgic look from the perspective of dreams, bringing to life those precious moments when one can be truly reflective and clear the mind from the remnants of dreams and subconscious thought. He talks also of longing for a father who is absent because of migration. Since the beginning of colonialism, life of a black person has been turned around, stifled and mind stir-fried and Mphahlele’s work has always been of liberating black man of the mental slavery.

LL: How did the idea of an exhibition on Mphahlele come about – what was the inspiration behind it?

CM: The inspiration was initially of paying homage to his life and work and seeing that 2019 marks his centenary, and the society seems to be silent about this milestone, I felt equally obliged and fitting to celebrate him in a form of an art exhibition, a profession he lived to achieve. In his Afrika My Music, he shares with us how he loved collecting African art and that works of Gerald Sekoto’s work graced his walls with pride.

Secondly, few years ago I was reading a book of letters exchanged between Vincent van Gogh (Dutch Painter) and his little brother Theo van Goch and at that time I was also reading Mphahlele’s Bury Me at the Marketplace book of letters exchanged between himself and his associates, I realised that Van Gogh is a big name in the arts globally because those left behind took greater interest in making sure that his work lives long, that was my other inspiration in attempt to keep the memory of Es’kia Mphahlele.

LL: Kindly elaborate on the artworks on exhibition. How would you describe the pieces and why did you choose this approach?

CM: The pieces are collaborative pieces between me and Professor Zakes Mda which we call ‘Jam Session’ series and individual pieces we both did separately. Mda’s individual works are inspired by Mphahlele’s love for Jazz music and his second autobiography of Afrika My Music.

My individual pieces as largely inspired by his first autobiography Down Second Avenue and some of Mphahlele’s other titles such as The Wanderers and Father Come Home novels. When you look at pieces such as a large scaled canvas A Night In Sophiatown and Bum-jive of Kofifi, here I am paying homage to the place that was part of Es’kia during his Drum days alongside Bloke Modisane, Henri Nxumalo, Can Themba and other guys known as ‘Drum Boys’. Some pieces on a printmaking linocut medium forms set of hundred linocut prints to mark 100 years of his life. The set will comprise renditions of his works across genre.

LL: What exactly are you trying to portray about Mphahlele the man and his works with this exhibition?

CM: It is difficult to portray the man and his work in just a single exhibition. The attempt of portrayal is to re-imagine and interpret his work in the best visuals as I possibly can.

LL: How much time did it take to put the artworks together and did you have any sponsor as it looks increasingly difficult for visual artists to secure sponsorship?

CM: It has been an ongoing process that spans over five years, only found the first expression for public consumption this year. I did not have a sponsor for this project. I always believed in getting the work done with the available resources at my disposal. The South African government and the corporate sector lack clear mechanism sponsorships that is sustainable to develop the visual arts landscape. Members of the public can sponsor the visual arts by attending the art exhibitions for free entrance.

LL: You collaborated with the great Zakes Mda on this project. How did this come about and why him specifically?

CM: Yes I collaborated with Professor Zakes Mda on this project. We have been collaborating or working together from my studio from 2016. Mda is a highly respected elder in the local and international arts fraternity and the choice to have him on this project exemplifies the possibility of inter-generational team-work in the arts. Most people know Mda as a novelist, playwright, activist and scholar but not as a painter.

LL: What was it like working with such a respected figure on a project to honour another great South African?

CM: I honestly felt a great sense of Es’kia Mphahlele spirit nudging me to soldier on with this project. Working with Zakes Mda, who has thanked me for ‘allowing to carry him in my dream’ has been a greatest achievement for me this year, 2019. He appreciates my contributions to the visual arts and that keeps me grounded and rooted. We have worked in many pieces together since 2016 both here and Cleveland, Ohio in the USA where he drove many hours so we could work together during the time I was the recipient of 2018 Zygote International Resident Artist. I value the collaboration highly and putting together this exhibition is the expression of gratitude and celebration of both contributions made by the late Professor Mphahlele and Professor Mda in the arts and cultural sector locally and globally.

LL: I was expecting a much stronger attendance at the opening of the exhibition than it turned out. Does it bother you at all that members of the public don’t seem to be fascinated by visual arts and literature like they would be say, by a music festival?

CM: Thank you so much for being part of the audience, my brother Lucas. According to the frequent attendees of opening exhibitions at the Polokwane Art Museum, Es’kia Centenary Exhibition is the most well attended of exhibitions with great turnout. I would like to thank the Polokwane Art Museum, the senior curator and his team, the panelists Makgatla Lethale-Thepa, Mokgadi Matlaka and Molebatsi Masedi. Thanks to the panel chair Kgothatso Mphahlele and the only surviving son of Es’kia and Rebecca Mphahlele,  Puso Mphahlele who attended as guest of honour.

Your disappointment, as I understand it, has more to do with comparison of arts disciplines such as musical and theatre concerts. South Africa has a low footprint traffic of members of the public for the visual arts or art exhibitions which we all need to work on. The problems stems from lack of art education being taught at our government schools and even some private schools. I am concerned that members of public are not consuming the arts like in other countries but complaining and doing nothing about it is a futile exercise. For the past decade or so I have been an arts advocate and helped work in  both theatre productions and art exhibitions audience developments and I can attest that we are gradually growing that audience development section, though we could do better than we are doing. The arts are also partially side-lined by the media mainstream in this country and if we work together we can build better communities of arts appreciators.

LL: Lastly, what is your plan going forward regarding this work on Mphahlele?

CM: My plan is for this show to become a travelogue and move from one public galleries or museums in attempt to educate and celebrate Mphahlele. I would say this is the first leg of the travelogue. – Mukurukuru Media