Book extract: Through an Unforgettable Storm: The Forging of a Loyal Cadre 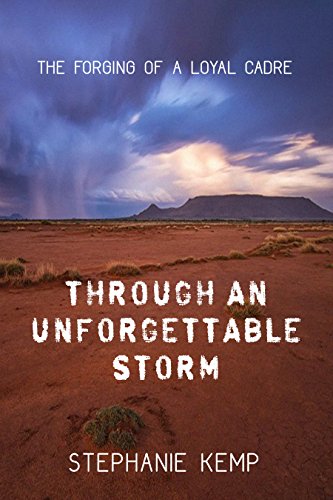 I sought out political students, went to political meetings on Campus and to rallies on the Cape Town Parade. Soon I found myself volunteering off-campus in one of the few remaining legal organisations, the Defence and Aid Fund housed at the top of Plein Street.

Defence and Aid drafted me into its Finance Committee. The volunteer Finance Committee members were all women. [They were] older than me and welcoming. Soon I learned that almost all of them were Jewish, with years of Communist struggle behind them. Deeply voiced East European accents talked of lives I had never imagined, of a history I had never known.

The women were in their forties and quite different from any women I had encountered in my 18 years. A complete antithesis to my own mother who was no snob but always dressed immaculately with colour-coordinated accessories. In my family, where I was the youngest of three daughters of a beautiful, elegant mother, the physical appearance of other girls, women, film stars were major points of discussion. Appearance was everything.

The women I met in the D&A Finance Committee seemed disinterested in, unaware even of their own appearance, or in the appearance of anyone else. They chatted about trade unionists, who was left wing and who was wrong. They picked apart current political decisions and past political struggles. They told stories of commitment and action. They were completely sure that they were on the winning side of history and presented their views with unchallengeable certainty.

There was Ray Edwards with an untidy body covered in untidy clothes, hemlines awry and colours unmatched. She had been married to trade unionist Solly Sachs and they had two sons, Albie and Johnny. They divorced when the little boys were no more than 3- and 4-years-old and Ray moved with them to Cape Town to a room on Clifton Beach. She became a typist to Moses Kotane after the Communist Party of South Africa’s Central Committee moved from Johannesburg to Cape Town in 1939. Ray briefly married again, a horn player in the Cape Town Orchestra, Norman Edwards.

Sarah Carneson was very small with a smile and laugh that quickly evaporated as she uttered very serious thoughts, her brightness undiminished by her recent release from detention together with Dora under the 1960 State of Emergency. Sarah and Dora were buoyant wearing their detention as badges of honour.

The women chatted, reminiscing about past decades when they had lived a history I had never heard about. I was astonished and excited by this new version of history that was alive and lived. They gave me Eddie Roux’s Time Longer Than Rope by now a banned book as Apartheid’s Publications Board tried to confine and direct our minds to the other, the sanitised version of what had happened in our history.

I learned of the history of earlier decades when the Communist Party of South Africa was legal. Albert Nzula, the first black general secretary who died while learning Marxism-Leninism in Moscow in 1934. Edwin Mofutsenyane, JB Marks, Bill Andrews, Eddie Roux, Yusuf Dadoo, Moses Kotane and many others. I learned of the “Native Republic” that overtook class struggle as the main contradiction in our concrete conditions in 1928 occasioning some ideological disarray in the CPSA. Until Moses Kotane pulled it together in the mid-1940s when he too returned from Moscow.

Early in 1962 when I was still 20, Fred (Carneson, Sarah’s husband) approached me to join the South African Communist Party (SACP). [It] had been outlawed and deeply clandestine for 10 years. You did not ask to join. You were recruited. No membership cards in conditions of illegality. Becoming a Communist was easy. Here was the alternative South Africa I longed for. Here was the clarity I was looking for. Communists had the most radical and coherent response to the barbarities of apartheid.

Marxism-Leninism provided guidelines in charting a way forward in which history and the development of societies gave revolutionaries a distinct advantage in the quest for a new world. It was important to me that their internationalism did not expect of me to give up a love for my country but expected everyone to fight for a better country in a better world. We clenched our fists with the thumb, the Horn of Africa , rising defiantly into the air as we called Mayibuye’ iAfrika (come back Africa). – Mukurukuru Media

Through an Unforgettable Storm: The Forging of a Loyal Cadre is published by Stephanie Kemp and Clarity Editorial.