Book review: Insights into life in the MK underground 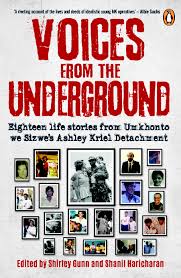 After spending what seemed like a lifetime in pain, lying badly injured alongside a road after rolling his car while on a mission for Umkhonto we Sizwe – Shanil Haricharan was relieved to finally see an ambulance approaching from a distance.

He had been rushing back from Botswana to the Jan Smuts airport [OR Tambo] by rental car, carrying money, route sketches to arms caches and communication notes for use in the underground when he lost control of the car along the N14 near Johannesburg.

“My head was hurled back and forth and sideways, hitting the steering wheel. The car finally landed on its roof in the Highveld grass. I lost consciousness.”

This is Haricharan’s vivid recollection of the incident in the book Voices from the Underground – Eighteen life stories from Umkhonto we Sizwe’s Ashley Kriel Detachment [Penguin].

The book is edited by Harichanan and the former commander of the unit Shirley Gunn, whose gripping account of her time in the underground and in detention also forms part of the book.

When Harichanan regained consciousness after rolling his car – he was in searing pain, unable to move and agonising about the possibility of police finding the hidden material in the wrecked car. Fortunately a deliveryman on a motorbike stopped and promised to call for help.

“After many minutes, an ambulance appeared on the road,” writes Haricharan.

But the ugly reality of apartheid – which Haricharan had given his life to fighting and defeating, reared its ugly head as he lay there in pain thinking help had come at last.

“I could hear shouting – ‘Hy’s Indies’ (He’s Indian) – then the sound of a vehicle departing. The ambulance left because I was not white. I seethed with rage. This was just another reminder of why I had to stay alive and fight.”

An ambulance catering for black patients arrived much later and took him to Leratong, a blacks only hospital near Krugersdorp.

Voices from the Underground, captures the fearless spirit of the members of the unit who in their accounts, share a common history of forced removals, racial discrimination and injustice, brutality by the security forces and a burning desire to defeat the evil regime.

The book provides gripping accounts of how the youths from diverse backgrounds, risked detention and death to form part of arguably the most successful MK unit operating in an urban area.

The unit’s network stretched from Gaborone in Botswana, where its commander in exile James Ngculu, codenamed Faiz, often met operatives to issue orders and organise weapons to be smuggled back into the country.

The authors tell of hair raising accounts crossing the border back into SA, driving cars laden with weapons and passing through roadblocks manned by soldiers from the SA Defence Force.

On some occasions the guerrillas even offered soldiers hitch hiking back home lifts on some of these missions – even going as far as allowing the unsuspecting SADF men to get behind the wheel during the long drive.

While it shows the daring side of the operatives and their adherence to strict security routines, the book also exposes the risk underground units were exposed to in that they didn’t have the sophisticated resources and networks to vet some of the people they recruited into the unit.

In those turbulent late 1980s when the security branch seemed to have eyes and ears everywhere, the Ashley Kriel Detachment managed to evade detection for years until after the release of Nelson Mandela in February 1990.

Gunn was eventually arrested and detained together with her baby during the transition period when the country was gearing towards a negotiated settlement. Much interestingly the authors also offer insights into their current occupations in the new SA. They also offer sobering, hard hitting reflections on the present and their feelings on their role in the armed struggle.

Some are still searching for answers, trying to fill the empty gaps from the past in order to close that chapter and move on.

Equally striking in their accounts is the common challenge they initially faced and some still face, of reintegrating into civilian life after the country’s transition to democracy – a common challenge that raises the question whether the country still needs a massive, concerted counselling and debriefing drive for former combatants. – Mukurukuru Media

Voices from the Underground is published by Penguin Random House South Africa and is available at the RRP of R320.