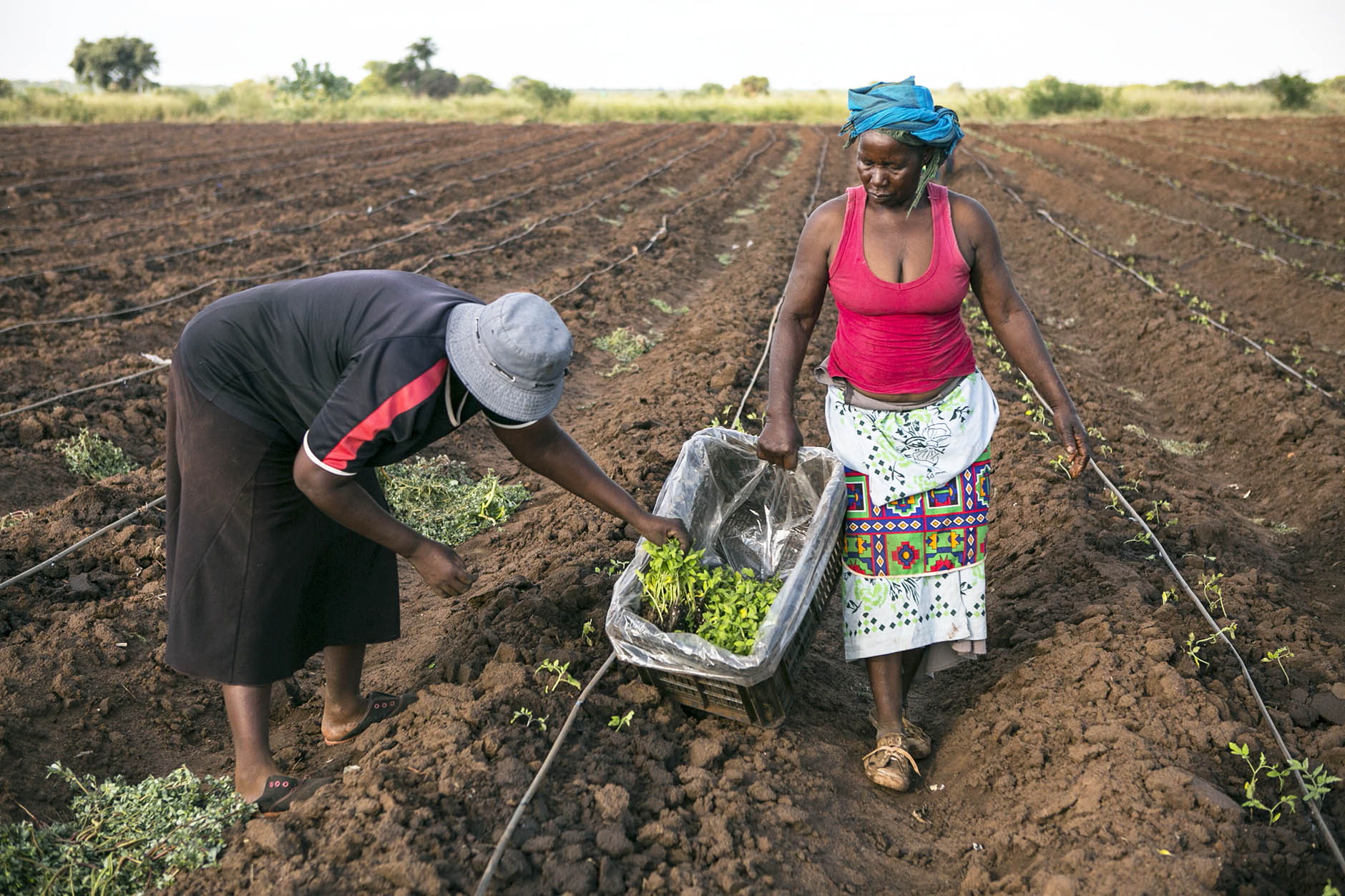 When night falls in Gumbu, residents begin to worry about herds of elephant that wander into their village from across the border in Zimbabwe to plunder their farm produce.

There’s even less talk about the Coronavirus in the village when Mukurukuru Media visits on a weekend in late March. The virus that’s forced most of the world into a lockdown is less of their worry. Villagers here face a lockdown of a different kind daily.

The village is located about 100km east of Musina. Almost every household in this rural area owns a garden for self-sustenance and small scale commercial farming thrives here.

But the village which lies 5km from the Limpopo river which forms the international border with Zimbabwe falls way out of the area covered by the 40km long fence announced by minister Patricia De Lille recently.

The department of public works announced the construction of the 1.8 meter high fence on either side of the Beit Bridge border post. The fence will run 20 kilometres on either side of the border post. The fence was vandalised recently, allegedly by people crossing the border illegally. Government has since announced deployment of the army to the area.

But this is cold comfort for the Gumbu residents who are further away from the designated site of the fence.

Farmer Salphina Mudau was unlucky this year after her tomato crops became the first casualty of the roaming elephants.

“This is the first time my farm has become a target. During others years we used to hear neighbours complaining about elephants devouring their crops,” said Mudau.

“They are destroying our crops, as you can see am still planting on the other side, but am not sure if I will harvest and make a profit,” she said.

The group of marauding elephants repeatedly pushes down her farm’s fence, eating and trampling her tomatoes and other crops.

The 48 year old from Gumbu village discovered that elephants were devouring on her crops after some locals unsuccessfully tried to chase elephants away.

Like many farmers she is still traumatised about the incident where an elephant trampled and killed a man who had gone to the bush to look for his cattle.

Mudau was optimistic that this year her harvest will increase and help grow her business.

After the late December rain Mudau and her husband started planting and watered their crops using groundwater.

But the ongoing invasion by elephants means that she may not reach the projections.

Since the elephant invasion escalated during the rainy season Mudau no longer leaves her farm late. She fears that once the sun goes down, the uninvited guests will move in for grazing.

“Previously, I would allow the workers to leave and remain on the farm continuing to work and remove weeds and conduct additional spraying, and leave.

“Now it is scary I can’t do that anymore, when we go home, they move in and start eating our crops, we are no longer safe,” said Mudau who employs at least 20 workers.

She started farming in 2008 and has won a female farmer of the year award.

Mudau started as a backyard farmer, after four years she won best Limpopo female farmer of the year’s backyard farmer category award. That inspired her to move into large-scale farming. But today her livelihood is threatened by roaming elephants.

Her husband and two workers usually join the group of other men to keep vigil during the nights. They use torches to check out the tomato fields and the bush around the farm. Sometimes she wakes up in the middle of the night and patrol using a torch for lighting.

She said guarding farms and patrolling was popular until recently when an elephant trampled and killed a local member of the community.

Mudau and other villagers used to spend a night on their farms sitting around fires. They had a belief that elephants are afraid of fire.

“Two years ago, we made fire. The elephants just passed through and ate our watermelons,” she said.

Mudau and other community members reported the herd to the environment police authority.

Days later two rangers were deployed to hunt the elephants. Mukurukuru Media joined in as the group of locals joined the pursuit in the dead of night.

That day locals who were looking for herds in the jungle spotted the herds earlier. For almost half hour driving through dark shrubs, no elephant was spotted, but the other group said they had spotted elephant dung.

While walking through Mudau’s property another farmer Portia Kaunda stood by the fence, asking with concern if Mudau was not leaving as it was getting dark.

“These elephants are making it very difficult to do our business,” said the tomato farmer who has been in business for seven years.

Community leader Mahwasane Mudzweda said upon hearing the elephants were around he called the wildlife officials to have the notorious elephants chased back to the wild.

He said the elephants come from neighbouring Zimbabwe.

Mahwasane argues that elephants roam freely as there is no fence on the border between Zimbabwe and South Africa on the eastern side.

“These elephants move from Zimbabwe to our areas. Last year rangers had to kill one that was terrorizing our neighboring village,” said Mahwasane.

By then it was dark and too late, and risky as they only depend on two rangers to deal with more than six elephants.

The conflict between human and wildlife in this area is part of the ongoing heart breaking story in areas near wildlife parks across the world.

For years their livestock shared grazing with those from Zimbabwe. But the invasion by elephants is giving these villagers sleepless nights.

Another villager said elephants were not the only problem. Instead lion and hyenas posed a serious threat devouring livestock.

“They move in and out willingly, even livestock graze in fear, if you see cattle running, it has become a signal that their territory has been invaded [by predators],” said Mahwasane.

Even wood collectors have stopped venturing too far into the bush in fear of the marauding elephant.  Some villagers have been reportedly killed by elephant.

The 22nd African Forestry and Wildlife Commission held at the Kruger National Park recently heard how African communities suffer from the ongoing human and wildlife conflict.

Edward Samuriwo Zimbabwe’s director of Environment and Natural Resources said the country is struggling to manage its population of more than 46 000 elephants.

He said due to lack of grazing in the national parks, their elephants threatened villagers.

The country population remains as their hands are bind by CITES agreement, which has banned hunting and sale of elephant trophy.

Namibia’s director of Wildlife and Forestry Joseph Hailwa said countries like Zimbabwe struggling with wildlife overpopulation should be allowed to sell some of their animals.

He said some countries found themselves with piles of ivory tusk, and are unable to sell because of Cites. He argues that a submission should be made to Cites to relax the ban.

“We have reached a maximum carrying capacity for animals, let us be allowed to and manage our resources,” said Hailwa.

According to Food and Agricultural Organization’s Forestry Officer Wildlife and Protected areas Kristina Rodina the organization has found that there are no policies designated to mitigate Human and Wildlife conflict in most countries.

“Lack of stand-alone policies and strategies to address human and wildlife conflict,” she said