Walking the beat to screen for corona 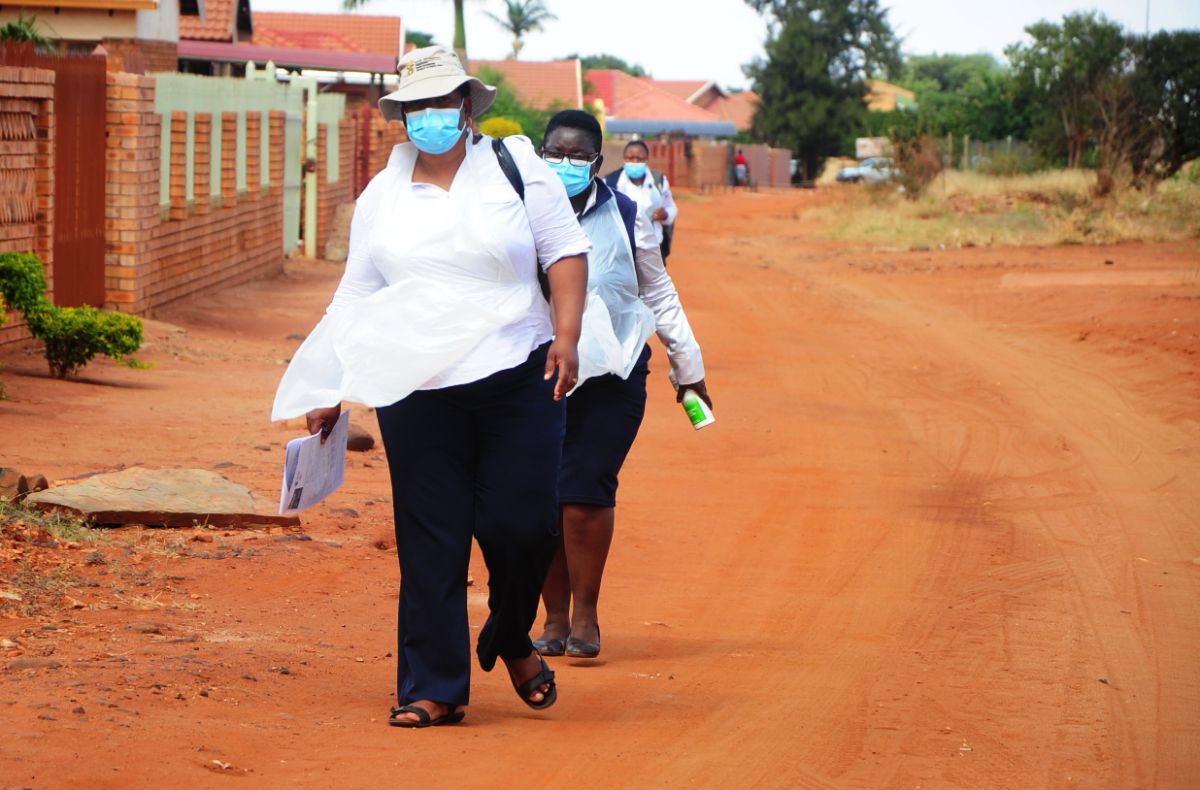 A chorus of voices echoes through the deserted neighbourhood.

Women in navy blue skirts, pants and white shirts stand knocking at the gates to different properties in a deserted street of Block B in Lebowakgomo, a township in Limpopo’s Nkumpi Lepelle municipality.

The quartet is part of a bigger group of community health care workers employed by the department of health to serve in the primary health care sector.

Since the outbreak of the coronavirus that saw the country placed under lockdown in March, they have taken on the important albeit exhausting role of conducting screening for the virus in households in rural villages and Lebowakgomo as part of the Provincial Mass Household Screening program.

Limpopo health MEC Dr Phophi Ramathuba says 9 856 community health care workers have been deployed to conduct screenings in the province since 14 April. She says by Friday (24 April 2020), the teams had managed to visit 800 119 households. screening 2 781 765 people.

“Of this, 2 783 people were referred for testing and 1 770 were tested.  Out of the 1 770 people who were tested as per this programme, one person tested positive,” says Ramathuba.

On a late Sunday morning Pinky Matjekane and her community health care worker colleagues have just left the clinic in Zone B for another long day of work, knocking on homes to conduct screening.

Another team has broken off to another section of the township.

“Kokoooo…kokoooo…koooooo…” Matjekane raises her voice trying to look over a shiny metal gate.

For a while it looks like there will be no response to her constant knocking. But after a while a voice finally echoes from behind the locked gate. Matjekane introduces herself as a community health care worker doing conducting screening for coronavirus. A young man pulls the gate open and invites her in.

Wearing a protective surgical mask, she flips out a page and clips it onto a file. A woman and her two teenage sons walk out of the house and stand under the shade of the carport. After introducing herself and explaining her mission she gets down to business.

They want to know if that’s all. She explains that if the screening team suspects there could be a positive case they then contact another team to come conduct the testing team to come conduct further tests. But there’s not much time for chit-chat and Matjekane walks out the yard and heads for another household.

Damaris Moletsane is concluding her screening next door. She is patient but very thorough in her conduct.

Her day starts at 5am and is at the clinic by 8am after taking a taxi there.

She has lost count of the number of households she has visited since the initiative started. Two days earlier she had stopped counting after visiting household number 17 in one day.

Despite the constant fear of contracting the virus Moletsane says so far she has not encountered any major challenges except on a few occasions when she had to interview foreign nationals who struggle to express themselves in the local languages.

“You don’t know what you are going to face. But we are getting there,” she says with a sigh.

She says one of the challenges they have encountered especially in the rural areas is the lax attitude of residents who continue to socialise despite the lockdown regulations.

“Generally in the township people are complying [but] in the villages people are going up and down the street and visiting each other,” she says.

Ramathuba says the identification of people to be tested through the screening process is an indication of the strength and impact of the program in communities on the fight against the pandemic.

“We are well aware that there are communities which are yet to be reached through this process of screening.  We have given an extension of the four days next week for our workers to reach out to those,” Ramathuba says.

She adds the campaign has shown that interprovincial transmission remains a problem and cited the two latest cases as an example.

Ramathuba says the province had registered 30 cases of Covid-19 and that 24 had recovered and two had died. She says there were four active cases.

“Case number 29 is a 52-year-old male teacher from Greater Giyani in the Mopani District who was picked up through our massive screening and testing campaign. He has a history of being admitted at a private facility in Gauteng and discharged on the 6th of April. His contacts have been identified and traced. Due to high comorbidity he has been admitted in a private facility where he is under isolation and is stable.”

She says the second death was that of a 55-year-old Sekhukhune man who worked as a freelancer in the film industry in Cape Town and was also a traditional healer.

The man is believed to have fallen ill while in Cape Town and his son drove him back to Limpopo. Ramathuba says on 20 April, when they noticed his condition worsening the family took him to a private doctor where he was declared dead on arrival.  The doctor and his five staff members have been tested and are now in quarantine.  The surgery has since been closed.

She says they have been monitoring all the deaths and have recommended that clinicians take swabs to collect specimen on the suspicious cases.

“His results came back unfortunately positive. Our tracer teams have since been on the ground visiting the surgery to disinfect it and also tracing all the contacts of the deceased to screen and test them.”

Meanwhile Moletsane and her colleagues continue on their daily task of screening as many people as possible for signs of the virus with the hope they can help slow it down from spreading and save lives. – Mukurukuru Media

2 thought on “Walking the beat to screen for corona”