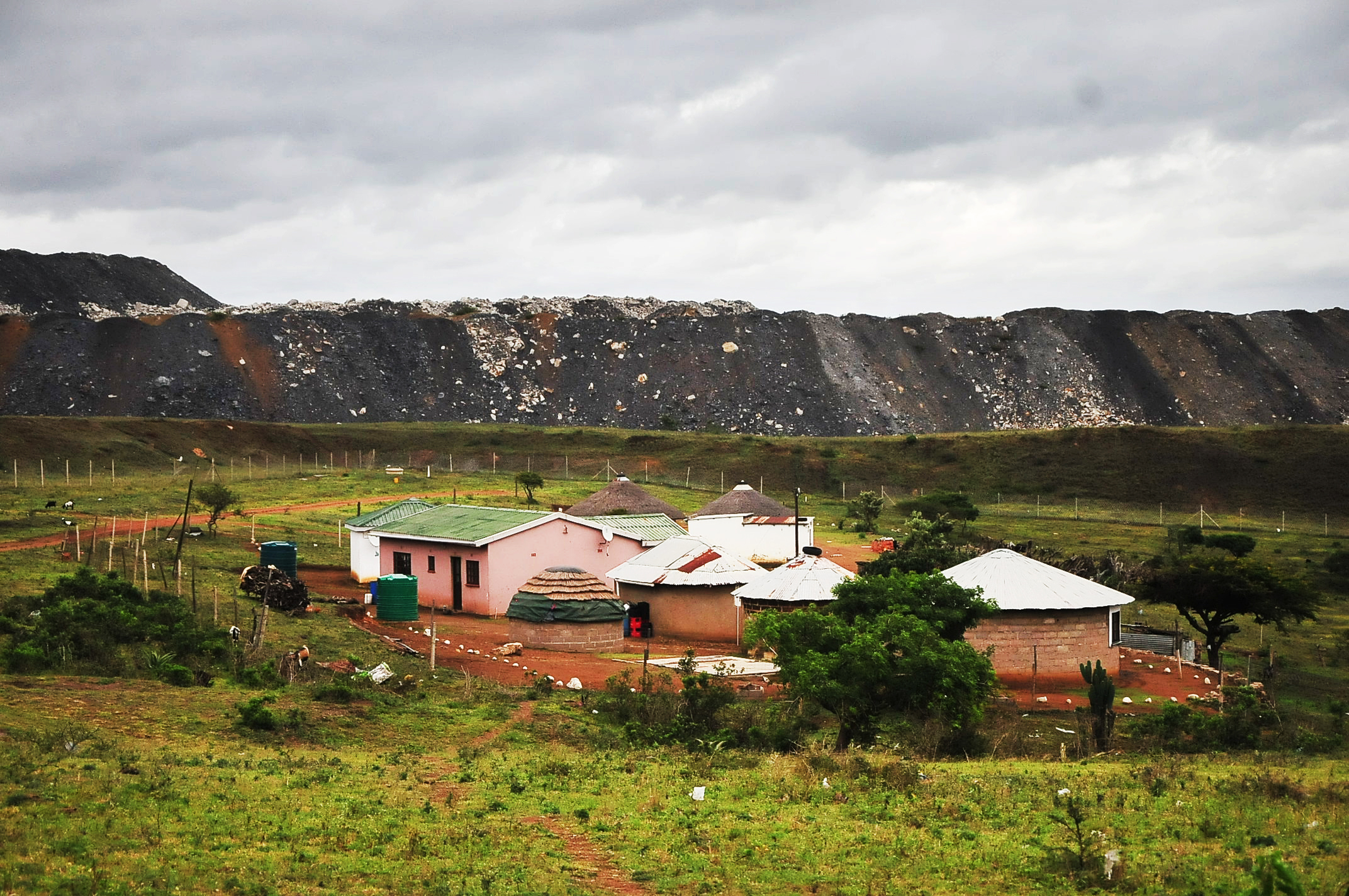 When Mzothule Biyela received a call from a neighbour to say there was a vehicle loaded with suspicious men looking for him in the village he knew the threats from many months were not just empty warnings.

Biyela is the latest anti – mining activist in northern KwaZulu-Natal who has allegedly been targeted by gun wielding assassins in what is believed to be an ongoing hunting down of community activists opposed to the forceful removal of families to make way for expansion of mining activities under the Mpukunyoni Tribal Authority on the KZN north coast.

The expansion of the operations of the Somkhele Coal Mine, owned by Tendele Coal Mining is allegedly at the centre of the shenanigans playing out in the rural village.

“For about three weeks, I had been receiving text messages from anonymous numbers warning me that my days were numbered. I was told to immediately leave my homestead or risk death to me and my family,” Biyela told Mukurukuru Media this week.

One of the threatening texts to his phone read: “ikusasa lomphakathi nomnotho wethu ngeke uvinjwe uwe uwedwa (the future of the community – our wealth cannot be derailed by you alone).

After the call from the neighbour, said Biyela, unknown gunmen stormed his homestead in Ophondweni village in search of the man they believed was instrumental in stoking tensions in the community to resist evictions.

“About 20 minutes prior to them arriving, I received a call from one of my neighbours and said that I should hide as there were men using a vehicle with a removed number plate looking for Mzo Biyela,” he relayed the horror.

He said as chills ran down his spine, in a panic mode, he alerted his wife who in turn took their 13-year-old and hid themselves inside a cattle kraal and took cover beneath the livestock in anticipation of the unknown.

“The men, I saw about five of them first stood at the gate and whispered to each other. They then scattered, surrounding the entire homestead. Among them, two heavily armed approached our living room and fired several shots inside the bedroom. They then kicked the door open and fired more shots before leaving,” said Biyela.

He said the entire ordeal lasted about 15 minutes. But the family spent the night in the kraal fearing the gunmen would return. Biyela and his family have since fled and taken refuge with relatives.

The activist said the attempt on his life was part of an ongoing battle pitting various parties in a battle by Tendele Coal Mining to extend its mining operations to the Ophondweni and eMahlahleni villages. The claim is however refuted by the coal mining, saying it was negotiating peacefully with the families concerned.

At least more than 400 families are in danger of being relocated from their ancestral land in order to allow for the extraction of rich coal underneath the earth surface where their houses are built. For three years, about 24 families have united in their efforts against the evictions.

The families together with social justice organisations have had numerous peaceful demonstrations voicing their disapproval. They are also approaching courts for legal relief. At the heart of their refusal to be relocated is that their removal would affect their livelihoods and that they were also worried about their ancestral graves should the mining materialise.

According to the Mpukunyoni Traditional Council, there needs to be written consent from the families before the mining company can go ahead with preparation for the mining work in the two villages.

Tendele complains that it had exhausted all mineable anthracite deposits and needs to move to the identified villages immediately, saying the move would save jobs and create additional employment opportunities for locals.

According to anti-mining activists in the area, Tendele is one of the key suppliers of anthracite in the country and sells about 730 000 tonnes a year to local ferrochrome producers. Somkhele Coal mining has more than 50% of all open pit mineable anthracite reserves in the country.

Since 2016 Tendele has been mining in the area leading to community conflicts and blood shed as villagers were divided into factions between those supporting the mining and those opposing it.

Other villagers blame the local Mpukunyoni traditional council for spearheading a reign of terror, threatening villagers who refused to move that they would be met with death.

Tholakele Mthethwa is another villager who has felt the wrath of her traditional leadership who she says wants her permanently removed from the community.

“I’m viewed as a trouble maker because I’m part of the people who have strongly refused to be chucked out of our ancestral land. In fact, in February this year we were summoned to the traditional court by the local and told that we were standing in the way for community progress and that we were undermining the traditional leadership.

“They coerced the families to sign consent and compensation letters and told us in our face that if we didn’t do as instructed blood would be shed and it would be on our conscious. Many of us did not cede to the threats and we declined to sign,” said Mthethwa.

She said shortly after the confrontation with the traditional leadership she survived an assassination attempt to her life.

“We were ambushed and attacked by unknown people who fired shots at my house. At the time I was with my daughter and granddaughter, we miraculously survived the attack unharmed. We were left shaken by this incident and I have made contact with police that should I die, my blood would be on the hands of the traditional leadership,” she said.

Mthethwa says the mining in the area has ruined their way of life, saying the villagers rely on small scale farming and this had been ruined because of water pollution and soil erosion.

“Our livestock are dying because of the dangerous chemicals emitted by the mine. There’s water pollution and the people are getting waterborne diseases because of the mine dust. This mining has brought untold human suffering and we want history to remember us the people who fought in defence of their right of birth and to exist peacefully in the land of our ancestors. If it means we are killed in the process so be it but we will not go down without a fight,” Mthethwa told Mukurukuru Media.

She said there was a circulating hit list targeting community members who were viewed to have wielded influence within the community, saying this was a strategy employed to silence mining critics.

Meanwhile, induna Msawenkosi Mkhwanazi speaking on behalf of the Mpukunyoni tribal authority disputed claims that they were working in cahoots with the Tendele Mining to hound villages off their land.

“By the way the genuine owners of the land have agreed to the agreed compensation and their relocation. More than 360 families have signed the consent agreements only a few people have declined. They are working with outsiders to destabilise this community. We can’t allow the mine to stop operations because of this few individuals because many people are employed by the mine and would lose their source of income,” said Mkhwanazi in defence of the Tendele Mining.

In May, Tendele lodged an urgent court application seeking court intervention to compel the villagers to vacate the area earmarked for mining. The matter was set for last week at the Pietermaritzburg High Court but the mine made a sudden u-turn after the lawyers representing the aggrieved residents had prepared answering affidavits in defence of the rights of the villagers claim to their land.

Richard Spoor of the Richard Spoor Inc, one of the law firms representing the distressed community, the mining company made a last meet court withdrawal.

“We served unsigned papers on the wee hours of Friday 12 June after sleepless nights. We later learned that Tendele no longer wanted to argue the matter in court,” said Spoor.

Apart from Somkhele and surrounding communities woes, the negative effect of the mining boom has already left a trail of destruction in the KZN north coast in Danhauser, eMpembeni, KwaMbonambi, uMtubatuba and Lake St Lucia.

Empembeni village has already seen more than 30 people being assassinated. The killings are allegedly linked to oil drilling and mining activities proposed for the area. Most of the people killed are community activists who were against the forced evictions of residents to make way for the extraction of raw material and rich minerals from their ancestral soil.

Commenting on the devastating effect of mining boom in KZN, Mary de Haas violence monitor and researcher said:  “It seems that corruption lies at the heart these killings. There seems to be no will from the government or traditional leadership to pay attention to the community grievances and the fact that innocent lives were being lost.

“There are extremely serious, and widespread, allegations of gross corruption in the Traditional Authority (as well as mining tender corruption). It is known that there are plans to move people for some oil or gas related activities which would involve more tenders.”

Nqobile Gwala, Provincial police spokesperson said police were investigating various cases of attempted murder and intimidation reported under the Mpukunyoni Traditional Authority but said they treated the offences as normal cases of criminality.

“We cannot say whether the incidents are related to anti mining or not,” she said.

A report by the NGO Human Rights Watch titled ‘We know Our Lives are in Danger – Environment of Fear in South Africa’s Mining Communities, noted that some of the activists in mining-affected communities have experienced threats, physical attacks, and/or damage to their property that they believe is a consequence of their activism, while others have received threatening phone calls from unidentified numbers.

“The origin of these attacks or threats are often unknown. So are the perpetrators, but activists believe they may have been facilitated by police, government officials, private security providers, or others apparently acting on behalf of mining companies.

“Threats and intimidation by other community members against activists often stem from a belief that activists are preventing or undermining an economically-beneficial mining project. In some cases, government officials or representatives of companies deliberately drive and exploit these community divisions, seeking to isolate and stigmatize those opposing the mine,” noted the report. – Mukurukuru Media