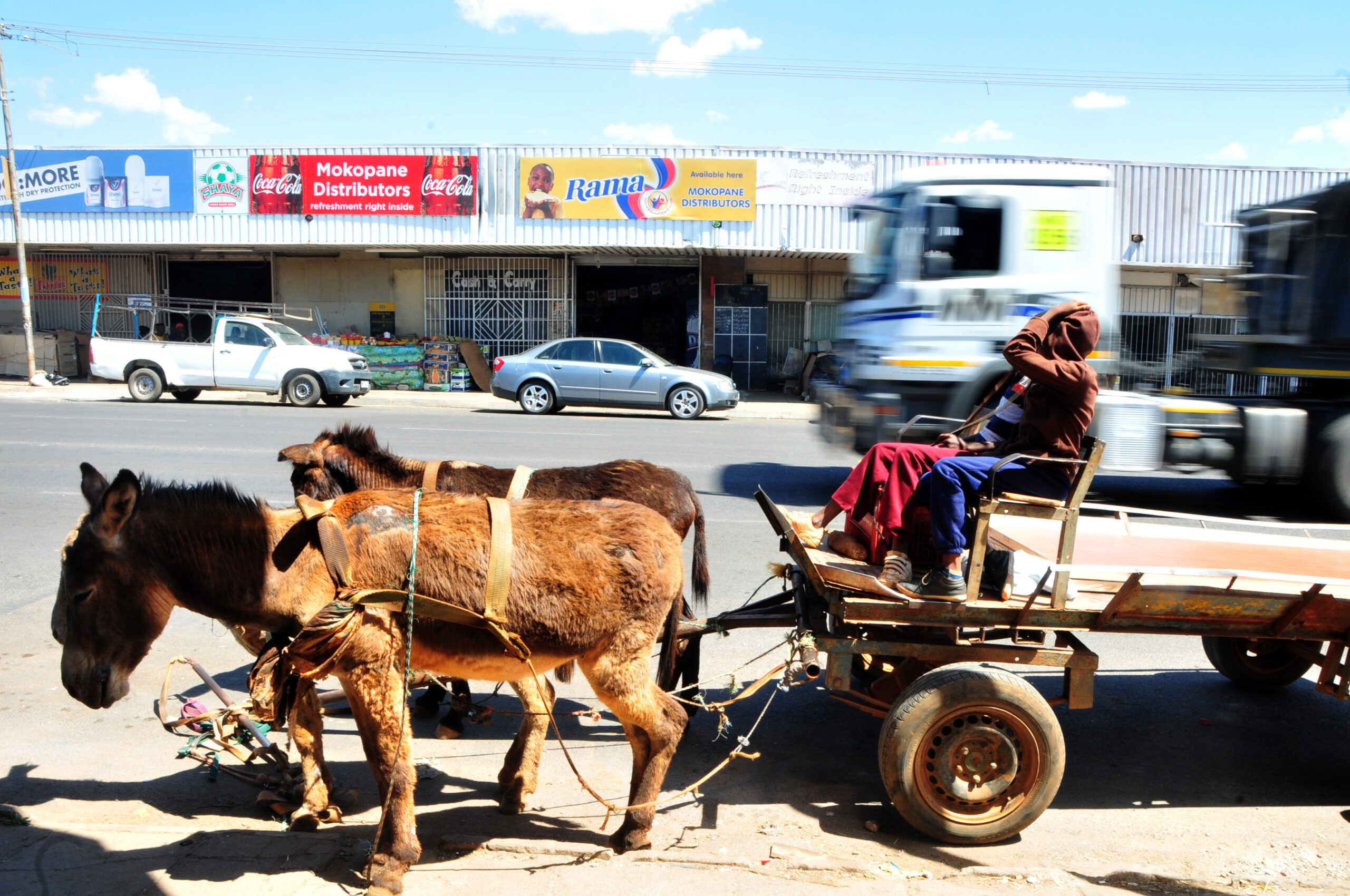 The donkey cart transport business has been a regular feature of life in Mokopane town for many year. Even with changing times and trends it continues just like old times. During this Transport Month of October we celebrate the continent’s reliable mode of transport. In most rural parts of the continent it still serves as an ambulance, taxi, courier and scholar transport.

JAMES Madupo remembers a time when the donkey cart transport business in Mokopane was good. Very good. So good that at one point his family owned about 11 donkeys and did on average eight trips on a good day.

“We used to make a lot of trips back then,” says Madupo, waiting by his cart drawn by three mares Slender, Jack and Jabu outside a busy wholesaler in the bustling centre of Mokopane town in Limpopo.

There are only four donkeys left in the business started by his father long ago when he, Madupo was still a baby. He joined the trade as a teenager in the mid 1990s, helping to transport goods including groceries, building material, hi-fis and even cases of beer to villages near the town located in the heart of the immensely beautiful Waterberg region.

Mokopane is a small towns. Smaller than the dot that represents it on the map. So small, were it not for the roaring trucks burping down the R101 that cuts through the centre of the town on their way to the far northern parts of the country, or the Nelson Mandela Avenue that leads to the border with Botswana some 200km away, you would literally miss it if you as much as looked down to check messages on your cellphone.

It’s a tight little town with streets wide enough for Bafana Bafana to hold a punishing training session. The donkey cart transport has for many years, served residents of villages, many of them within a seven kilometre radius to the west of the town who did not have cars and did not earn enough to afford the fares charged by bakkie transport operators. It still does. But with changing times, trends and circumstances, less and less people are now relying on the donkeys to carry their groceries or new appliances home.

“Sometimes you can go a day without having made a single trip. Business is no longer as good,” shrugs Madupo.

But what has brought about this change?

“Back then,” he says drawing on a cigarette, “there were no supermarkets in the villages and people relied on us to get their groceries from town. Now…”

Although business is no longer as good for the donkey cart transporters, it still helps men like Kgosana to put food on the table.

When he was retrenched from his job as a labourer in Johannesburg in 2007, Kgosana found himself at the crossroads. But having grown being born and raised in Mokopane he remembered how many of the people he knew had made a living from the donkey cart transport business through the years. With part of his retrenchment package, he spent R3 000 on a cart and bought four donkeys for R100 each.

Today he is regarded as the leader of Mokopane’s donkey cart transport men who gather from Monday to Saturday at the corner of Nelson Mandela Avenue, a bustling street lined with retail, wholesale, food and even a tombstone memorial shop.

Kgosana is a lively, easy going and warm man. Although he laughs easily and likes to poke fun at the hard life of Gauteng people, he has an aura of respect, like a disciplined old uncle who is  the family’s troubled times go-to person. He is a devout member of the Zion Christian Church whose badge he wears with pride on his tracksuit jacket. He wishes he were wearing the church’s cap on the day of our interview. But he laughs it off as one of those things that weren’t meant to be.

Like the other donkey cart transporters, every morning he waits for his clients, usually people from his village in Sekgakgapeng just two kilometres from town to call him to place orders. They then arrange ways for them to hand him the cash to purchase their orders. In the late morning, after ensuring that his three donkeys, Johanna, Miriam and Boesman are in perfect health for the day’s business, he heads into town to join the other transporters at the corner of Nelson Mandela Avenue and Kappie De Villiers Street where they wait for further calls from customers and solicit business from passing pedestrians.

Kgosana thinks long and hard when asked about the exact origins and date of the donkey cart business in Mokopane. A young man who works as a minibus taxi queue marshall chips and reckons it started in 1986. But Kgosana gives him a look that suggests the man doesn’t really know what he’s talking about.  Kgosana doesn’t remember when exactly it started. But he says after some long, serious thought. “It has been here for a long time. A very long time,” he says flashing that warm, friendly smile of his.

Even in this business, there are standard rules. Especially when it comes to pricing. To load and transport a case of beer costs R10, A 50kg of mielie meal R20, a packet of chicken feet R10 and other bigger items cost much more, enough for the donkey cart men to put bread on the table and service their carts.

“We work with the SPCA [Society for the Prevention of Cruelty to Animals]. They check the state of our donkeys,” says Kgosana.

On the road in Sekhukhune. Photo: Lucas Ledwaba

To keep his donkeys in good shape, he doesn’t make them run unnecessarily, doesn’t whip them and ensures they rest enough. On Sundays, he spends his mornings servicing his cart whose biggest expense are the wheel bearings which he has to replace regularly. On the day we meet Kgosana only has a small load, two crates of beer and a 50kg of maize meal to deliver. In the depressing midday bushveld heat, he gets onto his cart gets onto the busy Nelson Mandela Avenue. The donkeys have mastered the language of their master. At the traffic light they stop as instructed and move on again when Kgosana issues the instruction in Sepedi. Behind the donkey cart trucks roar in frustration. Bakkies and taxis hoot and fly past in the opposite direction. On the pavements, people walk to and fro in varying speeds. Johanna, Miriam and Boesman trudge on patiently. There’s no hurry here. It’s just another day in the heart of the bushveld, Mokopane. The past and the old melt into the midday heat. Life goes on. As it has for years, many, many years before…Mukurukuru Media

This article was first published by African Times in 2017

October is Transport Month. During this month Department of Transport and its entities will showcase transport infrastructure services in aviation; maritime; public transport and roads. This month will also be used to further advance the country’s road safety initiatives, while also creating awareness of the economic benefits of the sector.

The 2020 theme for Transport month is: “Together shaping the future of transport.” We aim to raise awareness of the important role of transport in the economy, and to invite participation from civic society and businesses alike, in providing a safer, more affordable, accessible and reliable transport – Department of Transport