Lingering in the hopeless coal dust that stole their dreams 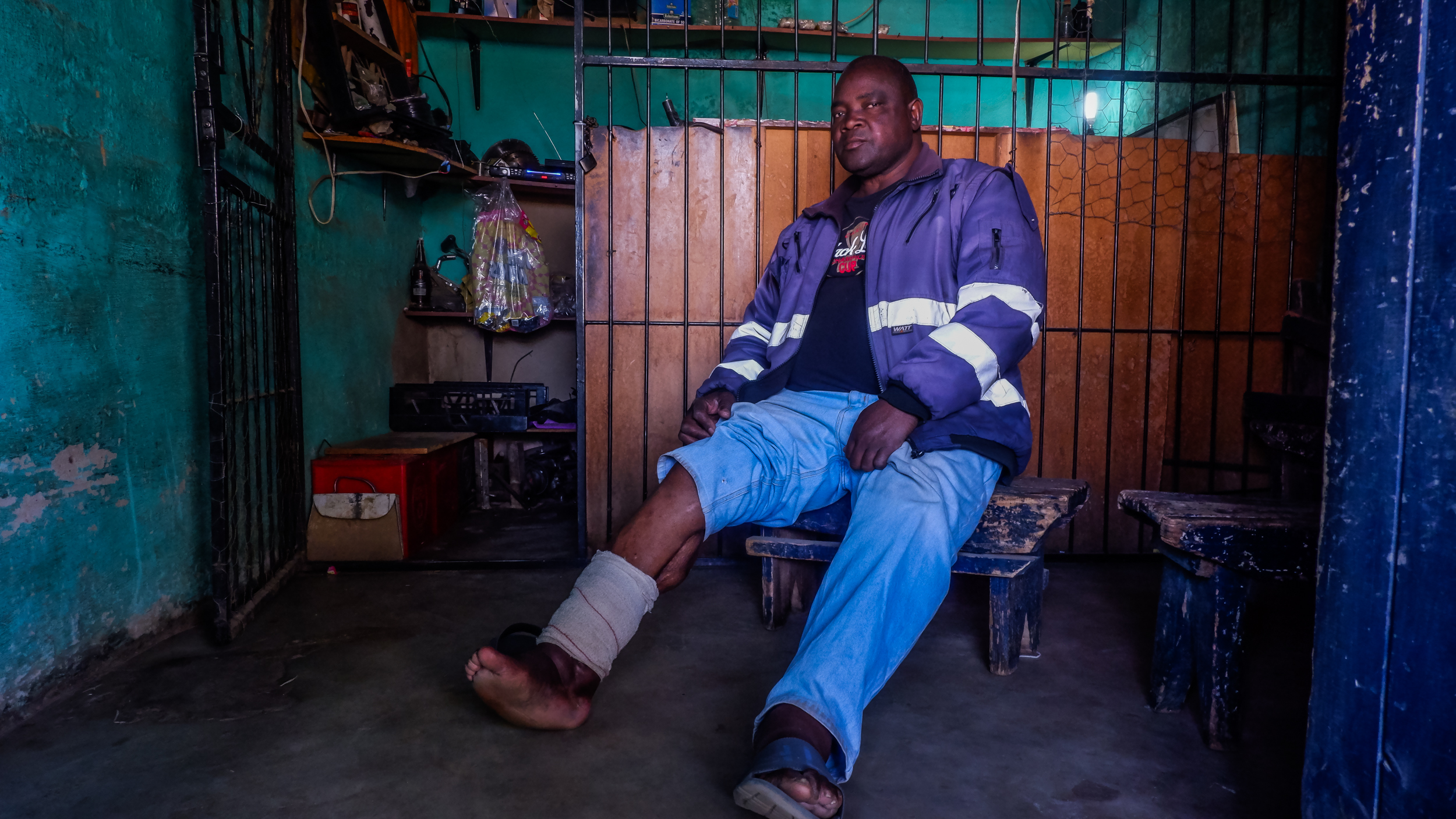 The coal stained clouds of the Phola township in Ogies paint a picture of a town deeply entrenched in its industrial roots. At every corner one can see young and old people, clad in the work overalls of one of the many mining companies that operate or have operated in the area.

It is the quintessential image of a place created to become the home of labouring workers struggling to fill their labouring stomachs. Among these workers is Francis Ngobeni.

The Mozambican born, former coal miner resides on an abandoned farm in Rietfontein which is not far from Phola. The farm is a dull, monotone open space whose residents are mostly immigrants from different parts of southern Africa.

It consists of wood and mud houses that reflect the existence of many that have been left on the periphery. Ngobeni, whose family is still back in Mozambique came to South Africa in search of opportunities.

He joined the long trek to South Africa made by his compatriots and found work in one of the many coal mines that make up the vast and ever-changing Mpumalanga highveld landscape.

Ngobeni worked on the mines for many years he says, unable to recall how many it is exactly, he knows he started sometime in 1976. He reiterates the point that he has no education, and this is the circumstance that made it easier for mining bosses to exploit him and others. When asked how old he is, he once more points out that the exact date of his birth often escapes him.

Sprouts of grey strands peeking out of his hair and beard reflect the extent of his seniority. When he speaks about the difficulties he faced while working underground there is a shift in his tone, one of being unsure whether to be happy or sad.

“Work was work. We were just happy to earn a living but the conditions were bad because they did not care for our safety. We only started getting dust masks and other PPE after 1994,” he remarks.

Under apartheid the working class in South Africa was separated based on race, and this resulted in many black, working class workers enduring shocking exploitation: including being forced to work underground without the appropriate safety gear. Many workers today struggle with respiratory ailments.

There is suspicion that many workers like Ngobeni have coal workers’ pneumoconiosis, also known as black lung disease, as a result of long-term exposure to coal dust. But these suspicions will only be proven after the workers have undergone the proper testing protocols, which will be facilitated by the SA Catholic Bishops Conference Justice and Peace Commission.

Coal workers’ pneumoconiosis is an incurable respiratory disease that causes the loss of blood vessels and air sacs in one’s lungs and makes it difficult to breathe and get enough oxygen into the body.

There is a bleak sense of grief in Ngobeni’s voice as he continues to recall the many years of his life that he gave to the mining companies he worked for. As if to mimic the mournful laments from Stompie Mavi’s classic number titled TEBA, in reference to The Employment Bureau of Africa the recruitment agency for South African mines since the 1960s.

These are words that describe the tale of men like Ngobeni perfectly; men who left their homes in search for a better life hoping to return with the newfound wealth. Instead the cities devoured them and spewed them, old and penniless and with nothing to show for the sacrifices they made.

Ngobeni was retrenched from Glencore mine in 2014 and paid out R20 000 and sent on his way. He says amongst the many ailments afflicting his body as a result of working on the mines for years, his eyes are the most affected.

“I don’t see very well, and I have high blood pressure but there is nothing I can do about it at this point,” he says.

He depends on collecting tin cans to recycle and earning a pensioner’s grant which he sends home to his wife who suffered a stroke a few years ago.

Father Stan Muyebe, the head of the SACBC Justice and Peace Commission, says the feasibility of a compensation lawsuit for the benefit of coal miners is yet to be determined. He however hopes that the exploratory process will yield fruitful results and provide the comfort that is necessary for men like Ngobeni to finally live out their elder years in peace.

Phola township is a myriad of beautiful contradictions. From the scenic mountainous views juxtaposed by illegal dumping sites with the occasional black smoke rising from a burning rubbish heap, to the festive mood in the streets made possible by beer clasping youths and playful children against a backdrop of shack dwellings.

This township paints the picture of a people haunted by the burden of dreams deferred. One such person is Zacarias Chirindza. Zacarias is also a Mozambican national who now resides in a two-bedroom shack in the township.

From his humble home one can see a view of mine shafts in the distance, covered by a green blanket of mountainous bliss, this view can be deceiving as it sometimes distracts one from the harsh realities that make up Chirindza’s life.

After realising that there is very little employment and opportunities available for young school dropouts like him, Chirindza followed his heart to South Africa. Like many Mozambican nationals he was recruited through TEBA. Chirindza started working On the mines as a teenager.

Chirindza is among the legions of men unfortunate enough to be sitting at the intersections of labourer and immigrant, both of which have been dealt with severely by history. Besides the hardships of being poor, jobless and without a solid place to call home, these men are also dealing with the consequences of working for many years in the coal mines without adequate safety materials.

They struggle with respiratory complications which have yet to be tested. Chirindza complains that he was not adequately compensated even though he gave the best years of his life to the mines.

“I walked away with only R4000 and I have not been paid in full. When I started working I was fine. The job made me sick. But I was willing to work anyway because I had a family to look after,” he says.

On the outskirts of Rietspruit is a quiet township overlooking the tainted landscape of the province of the rising sun, Mpumalanga. Here Salomao Carlos Macamo, 67, lives with his family in a humble homestead that stands right across the main road where coal filled trucks run back and forth everyday.

Macamo was born in Mozambique and he too came to South Africa as a young man to seek employment on the mines that promised a better life with greener pastures. Macamo struggles to walk because of an injury he sustained while working underground as a drill operator over 25 years ago.

“After giving so much to these people now it feels as if I have no life,” Macamo says.

He is confined to his home because of his injury and says he tries to provide for his family with the income from the small tuckshop he operates from his home. He is unable to walk and relies on his old van to get around whenever he needs to go somewhere.

“Every form of dignity l had was lost when I lost that job. I visited my family back home in Mozambique, but now I can’t because l have no money,” says Macamo.

Though they have found hope in working with the SACBC Justice and Peace Commission, whose advocacy group is exploring how to secure justice for the sick coal miners, they are still waiting in vain for now.

The story of Ngobeni, Chirindza and many like them is the story of perpetual violence being inflicted on the bodies of black, uneducated and poor labourers. It is the constant exploitation of those who are the backbone of our country’s economy and the impunity with which they are treated, as depicted in George Orwell’s animal farm.

It is the story of Masekela’s, never returning, Stimela, that steals fathers from their children and brings them back as hopeless old men who are without their past strengths. It is echoed in the lyrics from Stompie Mavi’s TEBA, who sings of the broken promises that snatched husbands from their wives; Uzubathuthe loliwe Uzubathuthe loliwe, bathuthe loliwe andi soze ndiye eGoli. – Mukurukuru Media