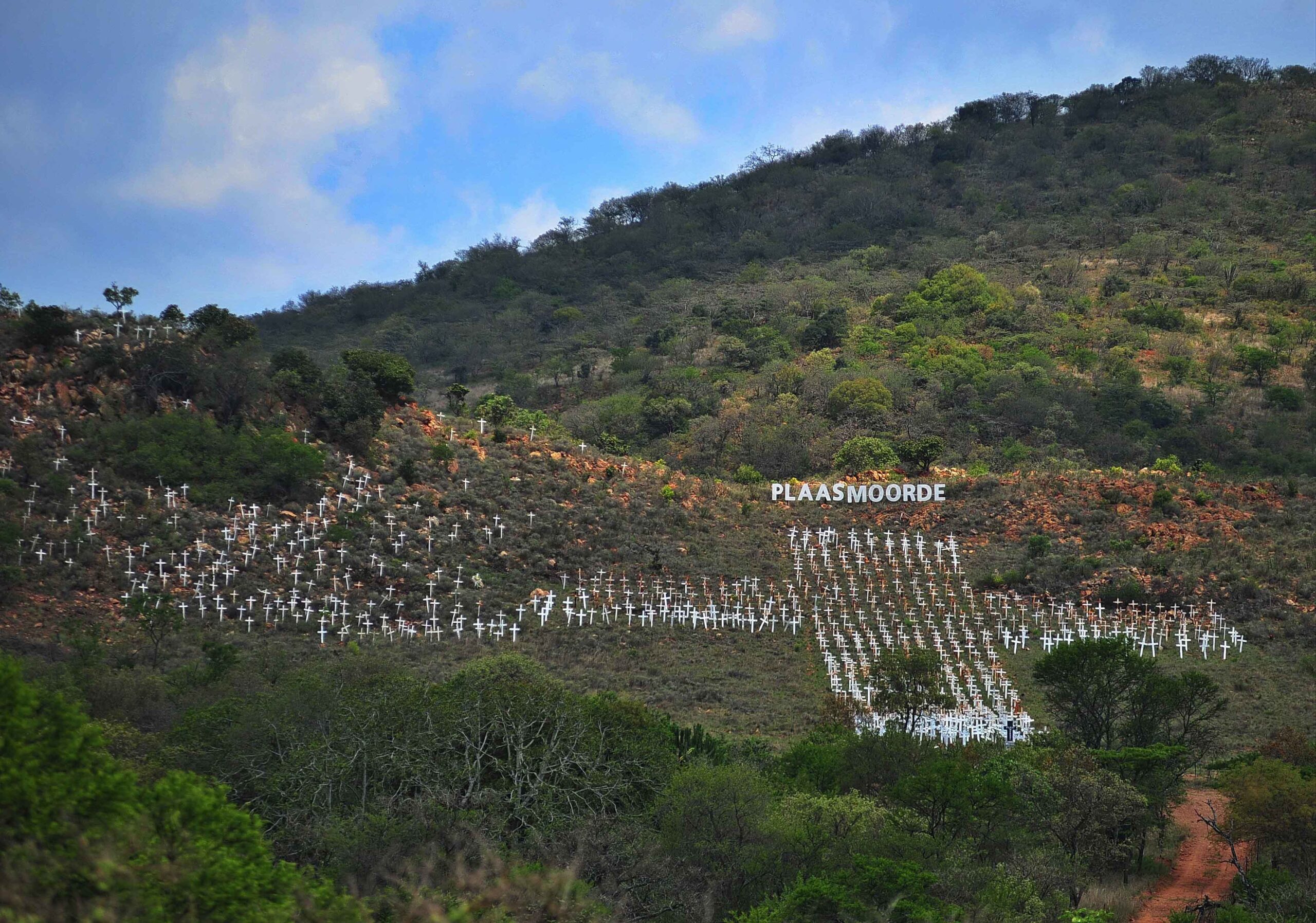 White commercial farmers should speak out against the violent brutality and gross violation of human rights black employees in the sector are subjected to with the same vigour they have displayed in protesting against farm murders.

If white farmers want the support of black farmworkers in dealing with crime in the agri-sector, they need to speak out and act against the actions of their racist colleagues who still think black people are subhuman and continue to treat them as such.

The fight against crime in the farming sector should go beyond forcing subdued black farmworkers to hang behind trucks used to ferry cattle, to carry placards in support of their masters’ course.

Some of those black farmworkers may not even be able to read the messages on those placards written by their masters because the system that still prevails on farms denied them their right to get an education.

It is true that white farmers are being killed on South African farms. And this is an unacceptable trend in a democratic state with a policing service that is allocated billions every financial year. Farmers play an important role in the country’s economy and food security. Their right to life is just as precious as that of the homeless man, the pauper and the black farm worker.

The issue of farm attacks and killings is also unfortunately also true for black farmers who just like their white counterparts, have not been spared in the crime bloodbath afflicting the country.

In fact, all sectors of our society including business, youth, women and children are killed daily in robberies in their homes and in the streets, in car hijackings on the roads and business heists.

Even police officers in uniform have not escaped the bullets from the thugs that terrorise our society.

In city suburbs citizens are attacked in their homes, beaten, robbed, raped and killed even. In the city’s streets people are robbed daily by gangs that operate with impunity. The grim reality facing us is that unfortunately ours is an extremely violent society.

Perhaps the only people not affected by violent crime are the politicians who lived under 24-hour armed guard. But for the rest of us, including white farmers, death by violence lurks everywhere, every day.

White commercial farmers have embarked on a campaign to speak out against the killing of their colleagues and have called on government to act. Protesting is the right of every citizen and should be encouraged and protected to ensure the cries and gripes of ordinary citizens reach those in power.

Some have reasoned that by continuing to call for action against the scourge, white farmers are seeking special attention and want to be prioritised over the rest of the citizenry.

But that’s missing the point. Nothing stops the rest of us from doing likewise. After all the right to protest and petition the state is enshrined in the constitution. Silence will never bring about any changes or solutions.

All citizens need to make as much noise about crime. Our silence gives the impression we have accepted crime as a normal way of life and that we agree the state is powerless to do anything to protect our lives.

White farmers are well within their rights to raise issues over the bloodbath afflicting their sector. But they should make as much noise over other underlying dark issues prevailing in their sector.

But perhaps the white commercial farming or needs to clean up its image as a racist, untransformed sector run by rightwing elements who still regard black people as an enemy to be dealt with violently.

And who can blame anyone for holding this view when public protests by white farmers are still characterised by waving of flags that represent a racist, oppressive and murderous past?

Why should people who were brutalised by a white minority racist government show solidarity and sympathy to a sector that still hangs on to this dark past and doesn’t seem to want to let go?

If black farmworkers and black people in the rural farming sector are expected to help fight crime on farms, then their employers need to treat them as equals, as humans, and rid their sector of racism and exploitation.

In fact, white farmers need to do more to integrate themselves into SA society and stop acting like an exclusive group that’s owed sympathy by everyone, including the black workers they exploit.

Conditions on farming communities in SA, captured in two reports by the toothless SA Human Rights Commission, show that many of the white farmers have still not been exorcised of the false racial superiority complex they were indoctrinated with under apartheid.

Then, in the eyes of the typical white farmer, the life of a black human being was worth way less than the potatoes they helped to grow through their hard labour; the labour that was rewarded with a pittance, lashings from the master’s sjambok, arbitrary evections and even death.

The reaction by white farmers when such transgressions by their colleagues in khakis are raised, is that this kind of behaviour is limited to a minority. If that is so, then why is the majority of white farmers silent?

Why are white farmers not protesting outside courts when their colleagues appear for killing a child who ate a sunflower?

Why is there a stony silence from white farmers when their colleagues shoot black people for the fun of it, and then later claim they mistook them for baboons when their brutality is exposed?

Why are white farmers silent when instead of adhering to the minimum wage set by government, their colleagues instead dismiss and evict black South African workers and replace them with desperate undocumented migrants who they know would never dare report transgressions against them?

Why is the white farming sector silent on the crackdown and resistance to unionisation of black farm workers who are arbitrarily dismissed for joining trade unions?

The white commercial farming sector which is built on the broken bodies of black children, women and men is indifferent to the violation of the rights of black people because they were spoiled by the apartheid state.

Generations of them were made to believe that abusing black people and getting filthy rich from their cheap labour was their divine right.

The apartheid state in its quest to protect the interests of white commercial agriculture militarised the sector through engineering the commando system.

Through it, paramilitary racist brutes lived out their fantasies of inflicting brutal violence against innocent black people without any consequences from a policing system that was on their side. Thank goodness the commando was discontinued under president Nelson Mandela.

There are constant calls from the white commercial farmers to reintroduce this kind of system. If it does government would be affording remnants from the old order, such as the racists threatening war during recent protests in Senekal, an opportunity to brutalise black people.

Policing should be left to the police. The state should rather invest in a well-trained unit equipped for rural policing.

But even more, if white farmers want the assistance of black rural communities and workers to assist in the fight against crime, they should learn and unlearn a lot of things.

They should learn that black people, just like them, have rights and these should be respected and upheld. If you treat your workers humanely and fairly, they would die for and with you.

If you treat them like sub-human and slaves, they will not be bothered if tsotsis come onto your property, brutalise and kill you. Why would anyone care to protect someone that makes their daily lives hell on earth?

Why would they give police information that might help resolve crimes if they know that tomorrow they might be beaten again, or evicted and dumped in a RDP settlement or have the graves of their ancestors flattened to make way for mielies?

It is easy sometimes to dismiss what I’ve outlined above as a generalisation and stereotyping of white commercial farmers.

Perhaps those who doubt that life for most black farmworkers remains hell on earth, they should join the SAHRC, the SAPS and other sectors on a crusade of imbizos on farms to hear for themselves from traumatised workers.

Farm workers in the main are on their own. Even the SAHRC reports into conditions on farms lay bare the facts. Their cries are often ignored by all. Political parties and politicians only remember them at election time – during which time some employers even deny them the right to vote.

Such is the hostility to efforts to reach farm workers that their employers even have the audacity to bar police, labour inspectors, union officials and journalists from entering their properties.

But perhaps in trying to find a solution to curbing crime in farming communities, the bigger question that needs to be asked should be, who is killing white farmers and why are they not being caught?

Are the prevailing conditions faced by black farm workers perhaps contributing to a failure to resolve these crimes?

*Lucas Ledwaba is the editor and publisher of Mukurukuru Media. He has covered stories of violation of human rights on farms for over 20 years.

One thought on “White farmers silent on brutality against black workers”