Gunfire and song follow PAC stalwart to the grave 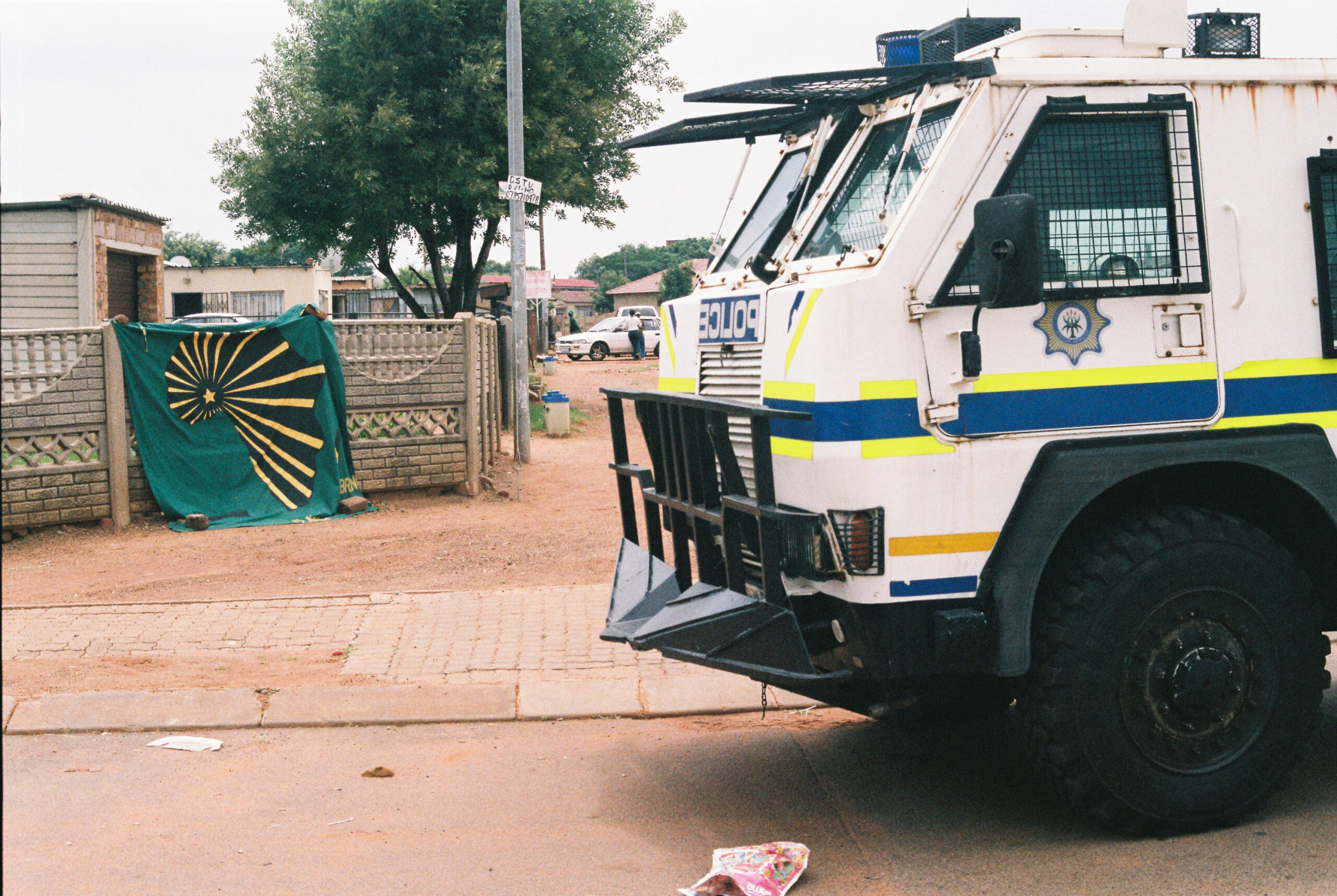 Atop the cracks of township streets a group of unsettled cadres shout useless taunts at the dull Daveyton sky. Her sweltering sun and humid air threaten to defeat their momentum but they hold fast, because they have gathered to bid farewell to a noble son of this drying African soil.

The echoes of bellowing gun shots send thunderous bangs into the tense atmosphere of the East Rand. It is Saturday 16 January 2021 and the remains of the late Pan Africanist Congress of Azania stalwart Johnson Mlambo were to be ushered to their final resting place after his untimely passing.

To cut the tension that roamed in the atmosphere, mourners, sing songs of old struggle days to call upon the higher powers from their ancestral realm.

The same higher powers who would welcome the elder Mlambo into the fold after is ascension into the next life.

They clapped in unison evoking the spirits of leaders like Sobukwe and Zephania Mothopeng, perhaps instructing them to hear their sorrowful prayers of song in these perilous times.

Johnson Phillip Mlambo, known to many as the chairperson or commander, succumbed to a Covid-19 related illness only a few days before and was being laid to rest under strict Covid-19 regulations.

A heavy police presence painted the picture of a resurrected revolution ushering its son to his final resting place. Mlambo knew better than most the brutality of our country’s volatile history.

The steadfast Africanist who spent 20 years on Robben Island, in the maximum-security prison spent the last of his days forging a unified PAC and attempting to bring it back to its former glory.

Mlambo was born on the 22 February 1940. He was 19 years old when he joined the PAC during its formation in 1959, and from that point on the struggle for the liberation of the black masses of South Africa would engulf the rest of his life.

Mlambo, who is often described by many as an astute leader and a profoundly diligent strategist, rose within the ranks of the PAC and eventually joined the PAC’s underground headquarters in Maseru, where he was part of the preparations for the so-called “Year of Destiny” being planned in 1963.

The year of destiny was a PAC led program to liberate the country from colonial rule and install an African government. He was arrested along with seven others – Abel Chiloane, Simon Nkosi, Josiah Makofane, Nelson Nkumane, Michael Ngila Muendane, Lucas Mahlangu and Douglas Simelane.

Mlambo was accused number one and was charged with sabotage and plotting to overthrow the South African government. After spending 20 years in prison he was released on 20 June 1983 and it took only 10 days for the ever radical and revolutionary Mlambo to rejoin the PAC’s APLA army in exile.

Mlambo took over as APLA’s commander-in-chief following the death of John Nyathi Pokela in 1985 and was responsible for arranging military training and support for APLA operatives in exile.

Amongst his many endeavors Mlambo was responsible for the formations of the Azanian National Youth Unity (Azanyu) and the Pan Africanist Student Organization (Paso), which both sought to reinvigorate the spirits of young people in the struggle for liberations and freedom.

Mlambo is said to have always had a burning desire to ignite the flame of sweeping change through the youth. Mlambo, like many others like him made the radical decision to take up arms and fight oppression when being a freedom fighter was not seen as act of nobility.

He took it upon himself to organize against apartheid when such a position earned you a label of criminality that could even result in death.

It took many years before the sickle and hammer of death would eventually strike the legend of Johnson Mlambo down. Notwithstanding the special and tumultuous time that his departure on earth has come, one must be willing to accept that indeed the revolution followed Mlambo until his dying days.

The Covid 19 pandemic was not a big enough threat for mourners who came in their numbers, clad in their various PAC regalia, summoning the vigor of days gone by when the likes of Mlambo still the physical ability had to lead the masses in revolution.

It said that of the many heinous acts of violence inflicted on him by the regime apparatus, the one that stood out most to his colleagues was while he was incarcerated on Robben Island where he lost an eye during a confrontation with a common law prisoner over a food boycott.

He testified about his experiences on Robben Island before the Truth and Reconciliation Commission’s Special Hearing into Prisons in July 1997.

“On another occasion I was put into a trench, forcibly held there and then some prisoners were actually instructed to cover me up, I was therefore being buried alive up to a point where it was only the face that was remaining above the earth. My whole body was covered and I was in that situation for quite some time, I had to scramble out at the time when the prison warders wanted to urinate into my mouth. That was one of the particular incidents which happened to me,” Mlambo told the committee.

Dr Alex Boraine, the TRC’s deputy chairperson remarked after Mlambo had concluded his testimony: “Mr Mlambo thank you very much indeed. You’ve been very modest in the description of the very long period of time you served in prison. I know for a fact that you lost an eye while you were in prison, you haven’t even mentioned that, you have focused on the fact that many of you were there together and you don’t want to push yourself forward and now you are continuing to serve a country that you want to see healed and we are very grateful for the witness that you have given today, we wish you well in the future.”

It is said that these and other acts of subjugation that might lead another person to a severe state of depression were the fuel that enabled Mlambo to rejoin the revolutionary forces he had left behind during his arrest.

Ever the steady and calm leader, Mlambo was part of the welcoming committee who ushered young fighters into the fold after they, too, were arrested during the unrest of1976. Of one such incident, a member of the PAC and close ally of Mlambo, Sithembele Khala recalled a statement said to him and other prisoners on their first day on Robben Island.

“When we arrived at Robben Island, we were part of the many young people arrested after the ’76 riots in Soweto. We were angry and militant but when we met commander Mlambo, he looked at us sympathetically and upon seeing how angry we were the first thing he said to us was: ‘in your anger and fit don’t forget to breath.’

Mlambo understood the foreign nature of the culture of setting barriers and demarcations in society and sought to break such parameters with his actions. His discipline was ever present in the small acts of kindness and respect he gave to all those who encountered him.

A small drizzle accompanied Mlambo from the Marivate Hall in Daveyton, where friends, family and comrades had gathered to celebrate his life. It was here that the Covid-19 threat met the fury of an oppressed people unwilling to concede.

Here songs that speak of a history written in blood were sung by a group of people unwilling to let their son go to his rest in silence. So determined were these mourners that the threat of bullets ripping out of the barrels of police guns along with the threat of contracting the Covid-19 pandemic did not discourage them from gathering to bid farewell to the commander and leader. The rain followed the cortege to the Crystal Park cemetery where a tense precipice was about to plunge the otherwise peaceful proceedings, into a violent abyss.

Ekurhuleni Metro Police officers flanked by members of the SAPS stood at the gate, heavily armed, waiting for mourners as they approached the gate. The PAC cadres who had marched on  foot, trekking the long and arduous road from the hall to the cemetery, singing struggle songs as they moved, preparing the way for the noble son to reach his final resting place.

With blistered feet and sweat dripping down their foreheads, they braved the altering weather patterns and expected to enter the gates of the cemetery as they had left the hall: with sorrowful hearts and hopeful songs.

While negotiating a way to allow for a peaceful entry into the graveyard, chaos broke out, the sound of rubber bullets shot into the sky and an aftermath of bleeding people running for cover returned the scene back to the days of struggle and oppression.

One might dare say that perhaps this insurgence of violence during the final parts of his burial was a sign that the revolution has followed the elder Mlambo to his final resting place, or furthermore, that his death should resurrect the revolution that will lead black people into the future of tangible, shared, liberation which they have longed for, for decades.