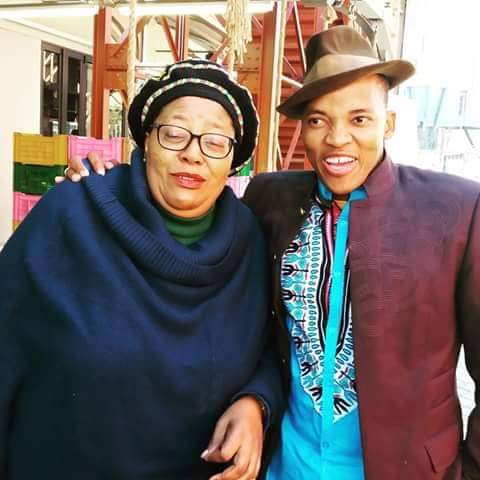 Dr Sibongile Khumalo who passed on 28 January 2021 said in one of her memorable reflections on life: “I am learning every day to surrender to my intuitive self, learning each day to transcend the limitations of my logical mind.”

I am learning to accept the sad news of the passing of a great giant of music, The First Lady of Song, Dr Sibongile Khumalo.

Upon hearing of her passing I contemplated these thoughts: the South African arts and cultural library is burning down.

Most of the significant encyclopaedia are up in flames. The question is, have we young cultural practitioners learned one or two from these encyclopaedias?

Do we even cherish and embrace those encyclopaedias that are still on the shelves that have not yet caught fire?

To me she was a friend, mentor, elder and a caring mother figure. The quote above is from the inside cover of her last album, Breath of Life.

On the album cover she generously used the artistic circular elements from the artwork which I gifted her under The Honourable Artwork Legacy Prize – my own initiative that aims to honour legends and give them flowers whilst they can still smell the aroma of the life around us. She was the first of the over recipients in 2015.

Prior to this, I extended an invitation to Dr Sibongile Khumalo through a Facebook messenger to honour her through a sit-down conversation and gifting of an artwork and she promptly acknowledged and accepted the prize.

“Oh my my my…this is gorgeous!!! I am speechless. The symbolism here, I don’t know if you know what circles mean to me. Wow, siyabonga.”

For her circles meant nature and the cynical nature of things giving rise to a continual, life giving energy.

“The age of a tree,” she wrote to me “represented in its rings of a bark the planets and how they are round, the strength of a cycle and how it derives its power or weakness from each of its links.”

The first time I watched her perform live was somewhere in 2011 when she performed in the musical Songs of Migration at the Market Theatre with Hugh Masekela.

The performance was out of this world. I remember making a vow that I will collect all of the albums under her name which I did.

Friend and colleague Roelf Matlala realising that I loved the diva’s work, gifted me with Ancient Evenings album for my birthday some years ago.

I dance to her music in the studio while working on projects such as art exhibitions, fairs or commissions.

In 2016 when I attended her special performance arranged by the Arts and Culture Trust where I was awarded the ImpACT Award for Visual Arts she said to me after the performance: “Congratulations Chepape, when I saw you were nominated, I knew it in my soul that you were going to get it.”

The Sibongile maMngoma Khumalo I got to know was a humble of a soul, warm to everyone, always affirming Africa and indigenous belief systems.

She was always nurturing of talent especially of young ones, advocating for social justice, forever educating and encouraging of arts and cultural alternative education.

This doesn’t happen in the institutions but ‘around the fire’ kind of school of knowledge which takes its from how our forebears taught ancient wisdom. No wonder her first recorded debut album was Ancient Evenings.

I remember in early 2017 after watching a performance of Tlokwe Sehume at the Market Theatre I was sitting in the foyer with her, Mandla Senior Maseko and journalist Sam Mathe, having some drinks and talking about the great performance.

After a while she said to me Chepape please walk me out I need to order a taxi home. As we walked out I said: “Mam’ Sibongile I can drive you home?”

She was surprised and replied: “Are you sure?”

It was a great to get to drive the legend home. One of the memories I will cherish for the rest of my life.

What stands out for me in her music is an embrace and advancement of culture through her music. She accomplished an impressive level of refinement in the context of the three faces of Western Art music, African classical and traditional music.

In one of her interviews on More Than Three Faces concert at the Market Theatre celebrating her 60th birthday in 2018 she said: “I hope that the interest I have in more than the three genres that set me off is very firmly established. In 1992/93, Western art music was one of my big musical influences. That has changed. African classical and traditional music takes a big place in my expression and interest. I have a greater awareness as a contemporary African woman, of the need to not only speak [as an] African, but to practise and live African. My spirituality is very much an expression of being an African, as I understand it today.”

The memory and legacy of Dr Sibongile Khumalo will be with the world for a long time. Her contribution to the arts in Africa and the world at large, through is insurmountable.

One of her goals that she wished to achieve from some interviews was to build a Music Academy in KwaZulu-Natal in honour of her father’s centenary anniversary in 1922. This I hope in celebrating her legacy and that of her father Khabi Mngoma, we make it happen.

As Professor Es’kia Mphahlele once said: “The silence of the grave and its audible whispers will continue to baffle us simple minds.”

I bid my farewell to the daughter of the soil and say I’m baffled by your passing, but I maintain the gratitude for the artistic treasure you left behind.