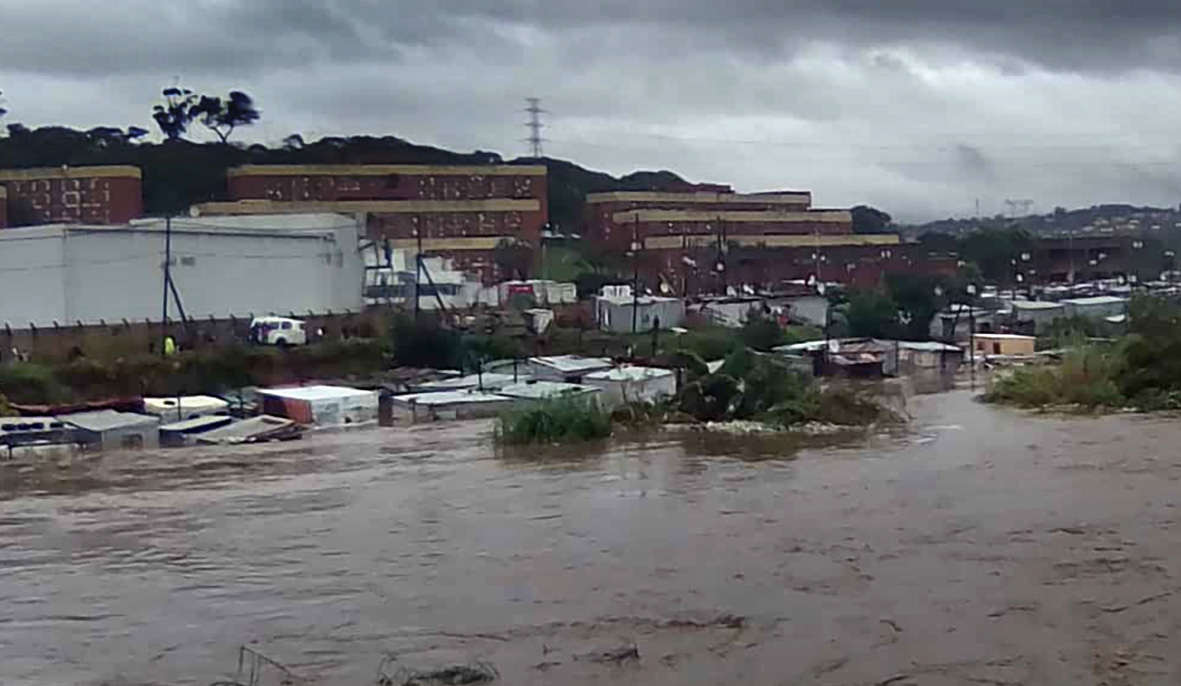 Dumped in an unfinished transit camp without water, food or toilets after spending two years in a crowded tent; this is how the eThekwini municipality treats destitute disaster victims.

“By 2030 eThekwini will be Africa’s most caring and liveable city,” claims the municipality’s marketing slogan. But the city will clearly need far longer than nine years to live up to its publicity puff. In fact, many would say it’s going backwards.

Back to the dark days of forced removals, brutal evictions and an apartheid-style administration that, instead of race-based persecution, wages war on the poor and vulnerable and punishes those who speak out against it.

Umlazi’s Mega Village flood victims are among the long list of poor communities that have found themselves, through no fault of their own, at the sharp, cold, inhumane end of the eThekwini municipality’s “caring.”

Rendered homeless during an April 2019 storm that unleashed 165 mm of rain on the city in less than 24 hours, the Mega Village flood victims were housed in temporary tented accommodation inside a disused, dilapidated community hall on the Tehuis Hostel grounds.

The province was at the time declared a disaster zone and nearly R900 million in various government allocations was committed for infrastructure repairs and flood relief, particularly housing for poor communities who had lost everything.

But somehow, somewhere along the way, as has become the norm with most government-led initiatives, it seems these funds never quite made it to where they were needed most and the 75 Mega Village flood victims languished in their crowded, leaking, draughty tent for two long years waiting in vain for the replacement homes they said they had been promised by city officials.

Corruption allegations swirled around the tent arrangement including claims that the municipality was allegedly paying vastly inflated fees for hire of the marquee and that funds meant to provide basic food for the flood victims were allegedly being misappropriated.

In the meantime, the community remained in limbo, unable to pick themselves up and move forwards and seemingly forgotten or actively isolated by city authorities.

Each time the community raised concerns it seems they were punished for trying to access basic human rights such as sufficient food, water, shelter, dignity, privacy and an environment not harmful to their health or well-being as well as their constitutional rights to information regarding their future.

After corruption allegations were raised towards the middle of 2020, the tent community’s food supply was terminated and they became solely reliant on a soup kitchen that operates five days a week from Tehuis Hostel.

When the kitchen closed during the festive season (most hostel dwellers return to their rural homes for Christmas), the community faced starvation and was forced to appeal to the local ward councilor for urgent food aid.

In early February this year, concerns regarding the community’s plight that were communicated to, among others, the Premier, the eThekwini mayor, the acting head of Disaster Management, the MECs for Social Development, Cooperative Governance and Traditional Affairs, Human Settlements, Health, Community Safety, past and present Provincial Treasurers, the speaker and members of the municipality’s Executive Council, elicited no response.

But the tent community reported they were suddenly deprived of water and their portable toilets were no longer serviced. One woman reported there was “sewerage flowing everywhere” and “maggots were crawling all over the seats.”

A member of the local ward committee also allegedly accused the tent community of “causing trouble” and “betraying” the committee by escalating their predicament.

Only two days after further complaints were lodged the community was reportedly visited by two municipal officials who declined to speak to the flood victims and said they would “only speak to the [ward] committee.”

Shortly thereafter, the community was “counted” and told they were to be moved to a new transit camp that was under construction near the existing Gwala Street transit camp in Lamontville.

As a ward committee member – a man whom they said they did not trust – had communicated news of their imminent relocation, they did not know whether the transit camp threat was real.

They hoped it was not. Transit camps are not a solution to eThekwini’s housing crisis, neither are they temporary. Once incarcerated in these inhumane slums communities rot there. People who were moved to transit camps from informal settlements so that their poverty did not to offend the visual sensibilities of international Soccer World Cup tourists in 2010, are still waiting for proper homes.

But no one in authority saw fit to engage directly with the tent community, much less sought their agreement to the move or even discussed options. Their automatic acquiescence was simply taken for granted as if they were not sentient beings, and, like livestock, could be “counted,” loaded up and dumped elsewhere.

Fresh corruption allegations have since surfaced about the new transit camp and these too were communicated to city management and others, together with questions about the company currently undertaking the camp’s construction, the value of the contract, whether proper supply chain management regulations were adhered to, what had become of the

2019 flood relief funds, and especially, why was the municipality seemingly prioritising the construction of transit camps instead of critically needed, decent social housing for which the two years since the 2019 storm had provided ample time.

Needless to say, these questions remain unanswered, floating somewhere in that infinite void that is the eThekwini municipality’s accountability.

On Tuesday 16 March the tent community’s worst fears were realised.

Trucks came, loaded up their belongings and took them to the as yet still unfinished transit camp that has sprung up next to the Gwala Street transit camp in Lamontville.

Of the 15 families, the majority are women, some are elderly and others have chronic illnesses. There is no electricity at the new camp, the community cannot even recharge their cellphones to follow up or make job applications or stay in touch with family.

The children are unable study after dark if they cannot afford candles. Cooking is difficult if not dangerous, that is when food is available to cook. The community can no longer get sustenance from the Tehuis soup kitchen. The tin units are tiny, poorly constructed and conditions even more cramped and unhygienic than they had been in the tent.

Worst of all, in the middle of a deadly global pandemic when hand washing and wearing a mask (which must be washed regularly) is about the only prevention mechanisms available to South Africans bereft of a coherent vaccination strategy, the “caring” municipality has dumped this community in an area with no access to water or toilets.

In terms of the Disaster Management Act evictions may not take place during Covid-19. A court may grant an eviction order but this would likely be suspended until the state of disaster lapses.

The court must also take into consideration issues such as the impact of the original disaster on the affected party, future access to basic services, prejudice to the affected persons, their access to legal services and protection of their health during any move.

But sadly, like the majority of poor South Africans, the community was unable to secure legal assistance to force the municipality to talk to them or prevent their banishment to the city’s shameful transit camps, in this case, rendered all the more inhumane and “unliveable” by the lack of water and sanitation.

Mahatma Gandhi once said, “The true measure of any society can be found in how it treats its most vulnerable members.”

The eThekwini municipality profoundly fails this test. Or it simply doesn’t “care”.

In terms of its treatment of victims left homeless and destitute by the 2019 floods the infamous Banksy’s social comment is more appropriate – street art of a periscope rising from the gutter of a dirty city slum above which hang the words: “I see humans but no humanity.”