‘Hey brother we will Kill you…’ 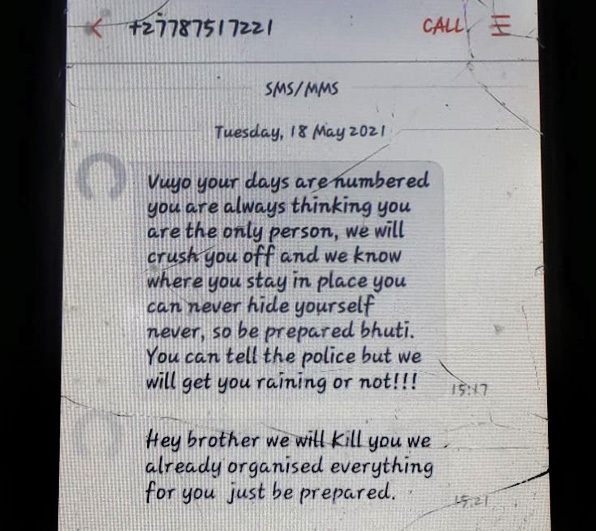 “Vuyo your days are numbered you are always thinking you are the only person, we will crush you off and we know where you stay in place you can never hide yourself never, so be prepared bhuti. You can tell the police but we will get you raining or not!!!” (sic)

The text message was sent to Vuyolwethu Sibulali, a community activist from ward 8 in the Mbizana (recently renamed the Winnie Madikizela-Mandela) local municipality at 15:17 on Tuesday 18 May.

It was closely followed by another at 15:21, “Hey brother we will Kill you we already organized everything for you just be prepared.” (sic)

Both messages were sent from cell number 0787517221. When called, the number went straight to voicemail.

Sibulali said: “It could be anyone, I have lots of enemies.”

He is right. In September 2018 Sibulali was Whats Apped gory crime scene images of what appeared to be suspects shot dead by police. At the time Sibulali had been active in community protests for access to clean water, against service delivery failure and alleged local government corruption.

Months before, the police had fired tear gas, stun grenades and live ammunition at demonstrators and several women were assaulted and charged with public violence including a young mother of three. An elderly man who was not involved in the demonstrations was shot with a rubber bullet and admitted to hospital.

Protest leaders, including Sibulali, were warned their names were on a hit list. A few months before, Bongile Hlambelo an ANC activist and close friend of Sibulali, disappeared without trace after having allegedly been offered a ‘security job’ during the ANC’s 54th national conference held at Nasrec in Gauteng.

According to a local tabloid, police may be investigating possible links between Hlambelo’s disappearance and Mbizana ward 6 councillor, Lucky Birthwell Mbuzi who was charged with the murder of ANC activists Mduduzi Madikizela and Hleliphi Thotshe in April this year.

Furious community members reportedly torched Mbuzi’s house in retaliation. Mbuzi was allegedly one of the last people to see Hlambelo alive. Shortly before his disappearance Sibulali had warned Hlambelo of an alleged plot to assassinate them both.

After addressing an anti-mining rally in January 2019, Sibulali was arrested, dragged along a road before shocked residents, allegedly beaten with a rifle butt and pepper sprayed. He said the officers vowed they were going to teach him a lesson because he “talks too much.” Sibulali believes the police were acting on the mine owner’s orders.

Charges were withdrawn six months later, but Sibulali’s injuries have permanently impaired his health. Although the incident was reported to the Independent Policing Investigative Directorate (IPID) and copious evidence provided including photographs of the assault in progress, medical records, witness’ statements and the officers’ identities, the National Prosecuting Authority (NPA) declined to prosecute – no reasons given.

The IPID has also repeatedly failed to respond to requests for feedback regarding its purported investigation into the police’s alleged use of excessive force during the 2018 community protests.

Again, substantial evidence – such as spent 9mm and rifle shell casings collected from the scene by members of the community – were submitted to the IPID as well as a list of over 20 witnesses.

The investigator no longer responds to email or text messages. The Centre for Applied Legal Studies (CALS) has since undertaken to appeal the NPA’s decision on Sibulali’s behalf.

The mine in question supplies gravel for road construction, including the controversial N2 Wild Coast Toll Highway upgrade, which, when eventually completed, will substantially reduce the time and cost of the transportation of titanium from the long contested Xolobeni mine to East London smelters.

The quarry also supplies gravel for the construction of the Mtentu mega-bridge – multi-million rand projects from which the mine-owner, who is an executive member and adviser on the N2 Wildcoast Development Committee, stands to profit handsomely.

In 2019 amaBhungane uncovered historic business connections between the mine owner and the nephew of a seemingly conflicted former director-general and advisor to the mining minister who, in 2010, allegedly attempted to bribe slain anti-mining activist Sikhosiphi ‘Bazooka’ Radebe, to secure his community’s support for the titanium mine.

The Xolobeni mine development and the N2 upgrade are inextricably linked and Ndakeni’s quarry owner stands to benefit from both.

According to Sibulali, application for mining rights to expand the quarry operations have been made. A board, apparently consisting solely of nearby Dudumeni village members, has been formed to take matters forward.

Dudumeni, the local ward councillor’s village, was recently gifted a borehole and taps. Last week Sibulali attended a Dudumeni community meeting, where, he alleged, those with concerns were silenced, including Ndakeni residents on whose land the quarry is located. They were allegedly told they will “get nothing” because, according to the councilor, the land belongs to Dudumeni.

Some villagers want the mine to cease operations immediately. They claim they were never fully compensated for their relocation back in 2014 when the mine commenced operations. Others allege family graves were disturbed.

Many complain that the mine’s regular use of explosives, even at night, causes excessive dust, continuous noise and damage to their homes. Others have accused the mine of stealing what little water they have access to – a dirty dribble of a stream that residents are forced to share with livestock.

There are now claims that the extraction of water from the new Dudumeni borehole may have affected the water table, further reducing the stream’s output at Ndakeni.

The quarry owner has consistently rubbished these complaints and accused Sibulali and his allies of making trouble to garner support for their political ambitions – a stock response increasingly used against anyone who advocates for accountability, transparency, good governance and effective service delivery.

Access to clean water – a most fundamental human right – has been a main driver of community unrest for over a decade. According to the municipality’s 2019-2020 integrated development plan, nearly 65% of households lack access to clean water while 36% lack proper sanitation.

In 2019 CALS undertook to engage with the authorities on behalf of the community to try and resolve their water issues, but progress has been slow and hampered further by Covid-19 related lockdowns. Shortly after CALS took up the matter, Sibulali was tipped off there was a plot to kill him and he was forced into hiding.

Last year Ndakeni and nearby villages were among the recipients of the Department of Human Settlements, Water and Sanitation’s much vaunted and abysmally executed emergency water tank distribution project, intended to provide critically needed water to schools and rural villages to help prevent the spread of Covid-19.

Unfortunately most tanks have remained dry since they were installed in April 2020 and residents’ reliance on their filthy stream persists. Further interventions by the department – which has reportedly incurred more than R2.4bn in irregular expenditure over the past five years – appear to have been swamped by allegations of corruption, the investigation of which, according to departmental minister, Lindiwe Sisulu, have, in respect of some Eastern Cape water boards, been subject to political meddling and interference by the police.

Sibulali is also worried that the mine’s expansion and Dudumeni’s claim to Ndakeni land could spark “war” between the villages.

Community members have also accused the mine owner and ward councilor of having “bought” the support of local leaders who previously opposed the quarry.

Their request for a meeting with the mine owner has allegedly been deferred until after local government elections during which the incumbent ward councilor apparently intends standing for a third term.

Members of the community claim the councilor “does as he pleases because he is a friend of (a powerful ANC leader and MEC in provincial government) who won big contracts from the Mbizana municipality and all over the Eastern Cape.”

A district municipality official close to the water saga sent a warning a few days ago via Sibulali’s father, that his name was doing the rounds and not in a good way. The official suggested that Sibulali should “watch his back.”

Sibulali has reported the latest threats to the Flagstaff police station. He is yet to receive a case number. Sibulali has clearly poked a hornet’s nest of interdependent political and business interests against which the criminal justice system has repeatedly proved reluctant to act.

Although he does not know the exact source of the most recent threats, many of the players are well known. Should anything happen to Sibulali, those most likely to gain by his silencing will be prime suspects.

And given the ANC’s recently professed commitment to cleanse itself of criminal elements and its constantly shifting factional allegiances, it remains to be seen whether such suspects would still be afforded the level of impunity they have enjoyed to date.

As Sibulali’s situation graphically demonstrates – and he is just one among the army of grassroots activists holding the line against total societal collapse – anyone still laboring under the misapprehension that South Africa is a constitutional democracy should visit the country’s rural areas and former ‘townships’ for a better understanding of just how badly the rule of law and basic moralities contained in the Bill of Rights have been leveled, chewed up and spat out by the political elite, their business associates and the beneficiaries of their patronage networks.

Vanessa Burger is an independent community activist for human rights and social justice.