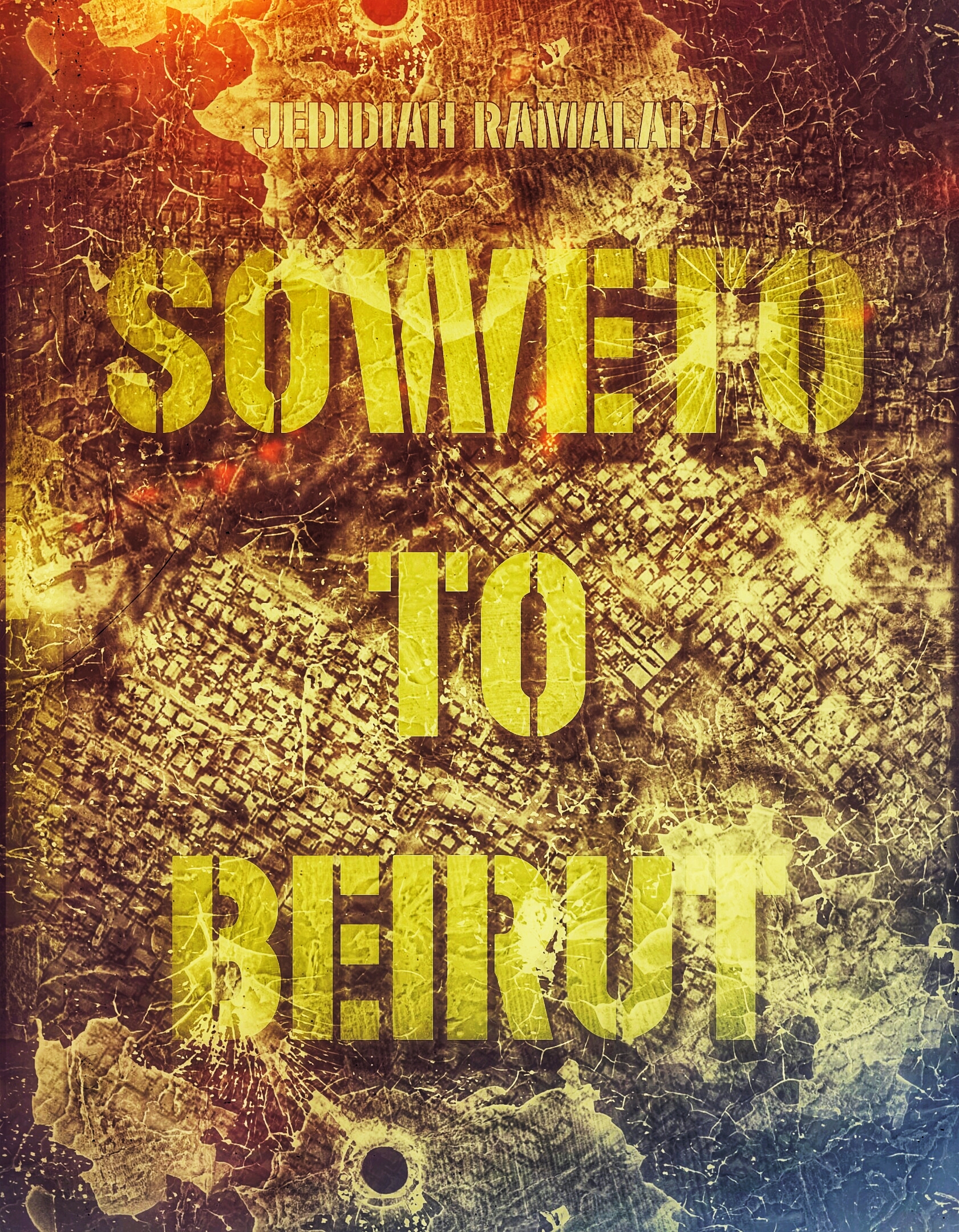 In this extract from her memoir set to be released this week journalist Jedidiah Ramalapa takes the reader on a journey into the heart of war-torn Lebanon. With the ever present threat of bombs raining down on them she joins activists on a 47 vehicle convoy into the heart of the country to deliver aid. She of course is a journalist out to report the story

CHAPTER 01: Quo Vadis, Where Are You Going?

This is when I declared war.

I promised myself, while standing in a pool of shame that I would be a war correspondent one day. I was going to be a war correspondent in Beirut no less, even though I could not objectively guarantee that a war would be underway in Beirut for me to report on by the time I completed my studies and got a good enough job that would send me there on assignment.  Nonetheless, it was in this moment, at this girl’s lavish home, where I made a decision that would change my life in unexpected ways.

So that seven years later, I find myself in a car with three young Lebanese activists – two boys from the Beirut-American University and one girl who is visiting family for the holidays from France. We are driving from Central Beirut to the south of Lebanon to deliver humanitarian aid to victims of the war between Hezbollah and Israel.

We are in a convoy of about 47 cars driving from Beirut to Nabatieh, 80 kilometres south of the capital. The Campaign of Resistance has organised the convoy to express anger at Israel’s forced blockage of South Lebanon. I am here on assignment to report on the war for the South African Broadcasting Corporation – SABC Radio News Division.

The convoy carries supplies, including 200 boxes of medication for chronic diseases, 300 loaves of bread, 3,000 incontinence diapers for the elderly, 200 boxes of canned raw food and hygiene bags containing shampoo, toothpaste, and soap. By then, the south of Lebanon had been completely cut off from the rest of the country, resulting in a lack of essential supplies such as medicine and fuel for an estimated 120 thousand people who had not fled bombardment by the Israeli Defence Forces.

Inside the car, I ask the students a few questions about the war; what they think of it? If they support any particular side? And why? I want to know if they understand the root of the problem, or if they have any solutions.

I also ask why they’ve chosen to take part in this civilian convoy to the south. Are they not afraid of dying? Of being hit by aerial bombs? I am not sure what I am going to do with the tape, but I record everything.

I want to tell a different story about the war, compared to the monotonous one I’ve been reporting on up until this point.

But I am not satisfied with the student’s answers. I feel as if I’m missing something – as if there is a fundamental principle about life that I’m simply not understanding. The students tell me that they are tired of the fighting. They take turns sharing stories of growing up as refugees, hiding in bunkers or listening to stories of war told around the dinner table. They tell me stories of how their grandparents endured, how their great-grandparents remained resilient and refused to cower under a series of oppressive regimes. And now, they continue, war is no longer a fairy-tale of a bygone era; it has caught up with them.  It is happening in their lifetime and they cannot tolerate it.

They tell me their deepest desire – they want peace.  They are willing to die for it. They insist that they are not partisan; they are simply patriots who care about their country. They don’t want it destroyed, again, they conclude.

To prove this point, one of the students, who is sitting in the back seat of the car, makes an indentation on his left wrist with a razor. Droplets of thick crimson blood boil out of his skin, which stretches like melted cheddar under the pressure of the blade. The other student, a girl who is sitting next to him, swears at him in French. “Merde!” she exclaims. “You are stupid! You know that?” ironically echoing my thoughts at that very moment.

“Yes, I know,” says the student. His shoulders are wrapped in the red, white, and green Lebanese flag. “But it’s because I care; it’s because I care too much about my country, you know?” He continues. “It’s not fair what is happening. It’s not fair,” he says emphatically, while covering the fresh wound with a white section of the flag to stop the bleeding.

We are all on a suicidal mission anyway.

The Israeli Defence Forces had warned that any vehicle travelling south of the Litany River, 30 kilometres north of the border with Israel, would be a prime target for airstrikes.

Already 43 people had been killed in civilian and humanitarian convoys carrying supplies to the south. More than 600 roads, 73 bridges, 72 connecting roads including 6,680 settlement units had been bombed and destroyed by the Israeli Defence Forces who were targeting what they call “terrorist infrastructure” in Lebanon.

Looking at the student’s bleeding hand makes me nauseous, so I turn my attention to the girl next to him. She is gorgeous, with light brown curly hair that frames a delicate symmetrical face, big brown eyes, red pouty lips, and a retroussé nose.

How beautiful can a single human being be? I wonder quietly. She can get anything she wants without ever having to open her mouth or sound vaguely intelligent. Her beauty alone is enough to quench a thirst. I imagine it would be as satisfying as a glass of cold water after a hearty meal. Oh my God, I mustn’t stare at her too much.  Looking at her beauty is therapeutic. I watch as she searches her handbag for a tissue to give to the young patriot.

I pry my neck away from her. My eyes rest on the moving landscape, but most of it is a blur.

We fall silent, lulled perhaps by the gravity of the situation, the heat, and the shots of whiskey that we’ve been taking periodically as libation for our lost souls.  No one speaks.

After a while, the driver turns to speak to me.

“You’re African; you must know Bob Marley, right?” he asks.

“Yes, I do,” I answer. I light a cigarette and drag in the nicotine. My thoughts wander: I think the students are crazy.

“I’m going to play some,” the driver tells me.

He inserts a Bob Marley and the Wailers 1976 CD called Rastaman Vibrations in the car’s CD player. The beat from their hit single, War, infuses the atmosphere.

“Do you know this song?” he asks, penetrating my thoughts.

“Do you know this song?” he asks again.

I may be hearing War for the first time, but the driver knows the lyrics by heart. Disproving an assumption that I don’t vocalise. I’m thinking that he’s probably playing Bob Marley just for the benefit of the only African in the car, aka, me. I think he’s being ‘stereotypical’ but I am wrong.

He starts to sing along with Bob Marley as if he’s alone in the car.

His melodic voice surprises me.

I’m feeling uncomfortable, so I pull out my Marantz to record the moment in an effort to create emotional distance between us.

The lyrics of the song, I later learn, are not the result of Bob Marley’s brilliant mind but are borrowed from a speech delivered by the Emperor of Ethiopia, Haile Selassie 1, during the annual United Nations General Assembly session in 1963. In his speech, he declared: Until the philosophy which holds one race superior and another inferior is finally, and permanently, discredited and abandoned there will be war.

Everywhere is war! sings Bob Marley. All things being equal, this is a song that I, a South African born in Johannesburg, Soweto, under apartheid’s racial segregation laws, should know. I had listened to a few Bob Marley songs before then, but for some reason this one had not been on my playlist.

It occurs to me that there are many things I don’t know about my country, the continent, the world and, more specifically, who I am in it.

It seems to me that one is required to go outside of one’s borders to understand what South Africa or a South African truly is. In other words, I feel as though I need to find my identity somewhere else, since it is missing at home.

I listen attentively to the lyrics and feel them burn through my soul like an unwanted tattoo. War!

After a while on the road, we reach the first checkpoint in Naema, where we find Lebanese police who prevent the convoy from proceeding further. They say they cannot guarantee our safety. ENDS

Where to find the book: https://africansunmedia.co.za/publishing-house/

Soweto to Beirut follows a young South African Journalist on an emotional journey of self-discovery while covering conflict in Beirut, Lebanon. The experience of war precipitates a deep loss of faith triggering childhood memories of growing up in Soweto in the early 80’s – with dramatic implications for relationships in all areas of her life. It’s a fast paced journey through time and place giving you a sensation of being nowhere and everywhere at the same time. Another perspective on how inter-generational trauma can wreak havoc in the personal, political and professional space.

About the author – Jedidiah Ramalapa is currently editor in chief of Sound Africa, a non-profit, non-fiction audio documentary organization with a mission to produce African stories which advance social justice and amplify the voices of everyday people. She is also the recipient of the United Nations Reham Al-Farra Memorial Journalism Fellowship (2008). Recently she worked in South Sudan as a Media Trainer for Canada’s largest international media development organization; Journalists for Human Rights (JHR).