No middle ground in times of war 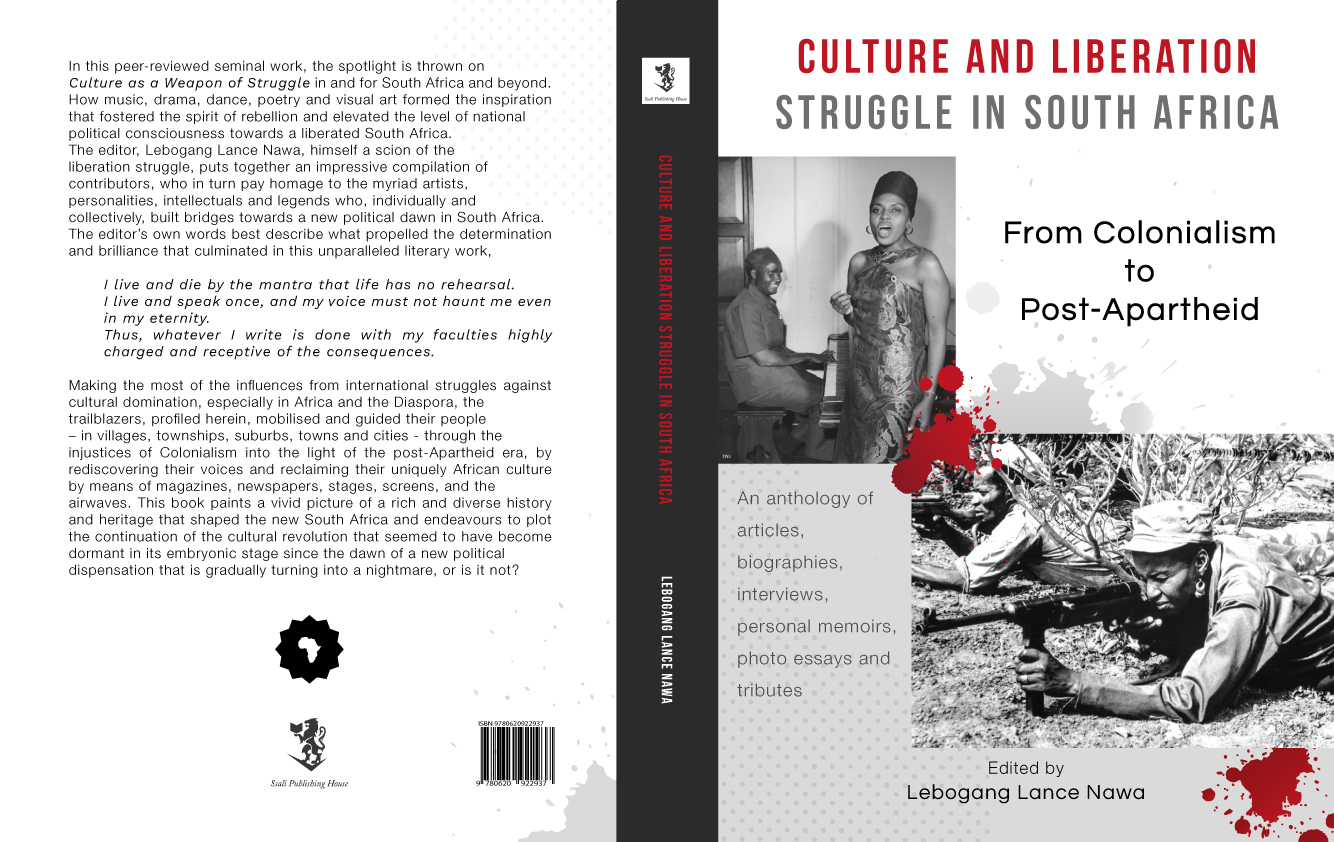 A new book titled Culture and Liberation Struggle in South Africa – From Colonialism to Apartheid explores the role of culture and the arts in fighting apartheid.

Twenty-six (26) years of democracy in our country, since 1994, are a miniscule timeline if measured against the five-and-half centuries of the historical, cultural, social, political and economic national conscious destruction meted out on the South African nation by the settlers, the Colonial and Apartheid dispensations. The fact is that the spiritual and mental seed and the collective state of mind of the nation, which will never be destroyed, was planted in the nation by the protracted national resistance and liberation struggles, and the eventual destruction of the Apartheid system.

The greatest challenge facing the nation now is: what must be done to pass that experience and history, both of the suffering of millions of South Africans and the almost five and half centuries of the freedom struggle, beginning with the defeat of the Portuguese by the Khoi and the San in the Cape, against the illegal and violent European settlement effort in our country in the sixteenth century? Those early wars of resistance were followed by the liberation struggle against the colonial and Apartheid systems, which generations after generations who inherit the heritage and legacy of the liberated, non-racial, non-sexist and democratic South Africa must promote and defend. To do so, would not only be to defend the South African nation, which in character now, will eventually be a microcosm of the diversity of the world. It will also be to claim the multiracial and therefore also the most diverseness of the human race world- wide within the shores of our country, as not only being diverse, but also being the wealth, treasure and heritage and beauty of creation and nature, which itself is most diverse.

This is extremely important because the most painful efforts and sacrifices by the masses of South Africa to liberate themselves, when they were eventually supported by the Anti-Apartheid Movements (AAM) from all over the world, were no longer whether, victory would be achieved or not, but when it is they will vanquish the racist regime so that South Africa can too defend and protect the diverseness of the human race. It was indeed, a signal to humankind that world freedom, peace and security is possible, and that the diversity of the human race is its precious wealth and that it is sacrosanct.

When the African National Congress (ANC) called for a variety of boycotts by the world against the Apartheid government and system, the people of the world responded from the late fifties, to almost the early nineties. They responded from cities, towns, rural areas, from universities, schools, churches and the Labour Movement, from the banks and from some governments such as that of Sweden. This, much more so after the Sharpeville massacre. This clarion call ignited a major debate in the United Nations, (UN), to the extent that it (UN) declared Apartheid a ‘Crime against Humanity’. When different governments in the world debated this issue, some for and some against, the masses of those different countries of the world also joined the debates. Thus did the world develop not only an understanding but also a consciousness against Apartheid, especially because the Apartheid issue coincided with the debates against fascism and Nazism.

The masses of the world were outraged against the Apartheid system, as they were also outraged by racism in their own countries. From the academic and cultural boycott against South African academic institutions and cultural organisations and even individuals, to the mounting economic sanctions by some governments including disinvests in the Apartheid system, against South Africa, it were as if a wave , the sea, concentric in character, grew, from the African continent, to one country after the other and throughout the world against the Apartheid state. This not without opposition from some governments against the masses of their own countries. However, the masses had resolved to support the oppressed people of our country, and were relentless in their outrage against the Apartheid state and system.

The boycotts isolated both the South African scholars and their institutions, thus impoverishing the South African intellectual output, which came mainly from White South African universities and research institutions. The White only orchestras, theatres, music schools and groups were isolated with no exposure to world cultural activities. The debate in this regard was whether by so isolating the Whites only groups and individuals, was that not to deepen Apartheid as a system, as also whether the sanctions were not impoverishing the very poor further by impoverishing the country. The issue here was that the Apartheid system was the creation of the Apartheid regime, which would by all means necessary, even against the will of the whole world, defend it. Defending it meant deepening the oppression and exploitation of the Black majority, even with the greatest of violence. Meaning that it is either that, or to free Blacks-there was no middle ground. So, what then would free the majority Blacks? The oppressed and those who support them are the only means and motive force against the Apartheid regime.

It must be noted that, the methods of isolation of the Apartheid system were part of a larger international campaign of ‘isolation’ that eventually included political, economic, cultural and sports boycotts. The disinvestment campaigns, the sanctions, boycotts both academic and cultural all the methods to isolate the Apartheid regime and system, ended in 1990, after the processes of the people to people democracy was introduced by the ANC in 1987 when its stated goal of ending Apartheid was achieved. Also, most important, it was when people to people democracy was encouraged among countries with South Africa that the isolation was further intensified. It must be noted, especially in South Africa, that the rebuttal against the arguments for the withdrawal of the boycotts emerged and were strong coming from among the ordinary people, the masses in Europe, Scandinavian countries, the US, Latin America , Australia, Canada, the Caribbean Islands and African Diaspora world- wide; also from Cuba, China, Vietnam and the Soviet Union, whose governments also supported the armed struggle.

The fact that the oppressed people of our country had also eventually picked up arms to fight against the Apartheid state was in some countries a sore issue. That too caused a discussion and debate; some people understanding why, others opposed to the tactic. However, that did not in large measure deter the mass support for the liberation Movement and for the struggle for freedom in South African by the people. On the other hand, precisely because the people had made a choice to pick up arms and fight, other governments, e.g. Cuba, China and the Soviet Union, also supported the armed struggle practically.

This state of affairs also mobilised the South African freedom fighters and other South African exiles, to engage with the masses of the different countries where they were. Through the different offices of the ANC, which were spread across Africa and the world, the discussions about South Africa were also taken into the sitting and board rooms of different families and organizations through the televisions and other forms of media. Besides the media, universities, cultural organisations, also partnered with resident South African activists to mount the boycotts and the isolation strategy against South Africa.

D. PROOF OF PAYMENTKindly email proof of payment, name and address to nawa.lance@gmail.com