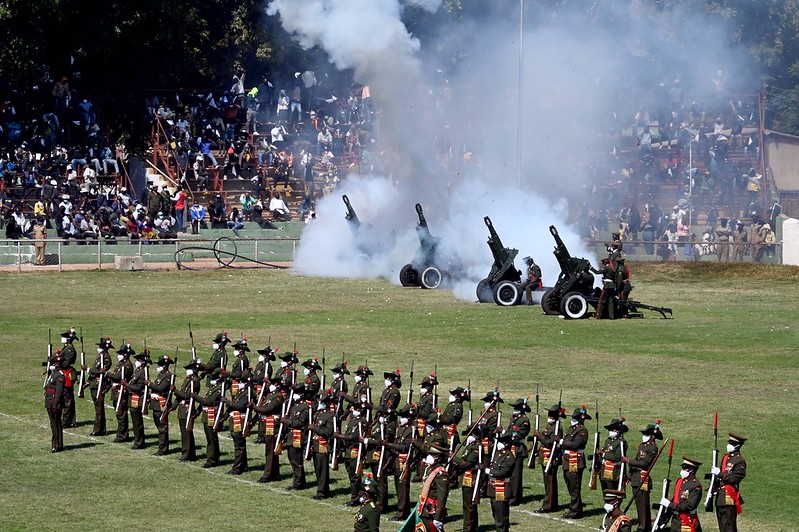 The continent’s leaders gathered in the Zambian capital Lusaka to pay their respects to Dr Kenneth Kaunda who passed away last month.

Kaunda was sent off to the thundering of canons and singing of freedom songs in a ceremonial funeral attended by thousands of civilians.

In his tribute to the fallen statesman Moussa Faki Mahamat, Chairperson of the African Union Commission said:

“The Independence of Zambia is meaningless if the rest of the Region remains under colonial rule.” These words speak volumes of who President Kenneth Kaunda was, and how much he was willing to sacrifice for the benefit of the African continent.

Today, we are united in deep gratitude for the life of President Kaunda, a unifier who had the unique ability to rally us all behind the cause of Pan Africanism.

On this solemn occasion, I stand before you, on behalf of the Organization that President Kaunda helped found, and whose values he embodied. And it is with the highest humility that I must confess, it is not easy to eulogize someone of President Kaunda’s stature.

In 1964, the year of Zambia’s independence, eight countries in the region were still under colonial domination, and their futures uncertain.

The contribution of President Kaunda to the total liberation of Africa is embodied in the values that underpinned the Mulungushi Club that he was a founding member of. This served as a precursor to the Frontline States, and was an instrumental building block for the regional integration agenda we now advance on the continent.

Under the OAU Liberation Committee which was based in Dar es Salaam, the legendary Liberation Center in Lusaka hosted liberation movements such as SWAPO from Namibia, UNITA and MPLA from Angola, ZANU and ZAPU of Zimbabwe, FRELIMO from Mocambique, the Pan Africanist Congress and the ANC from South Africa, which had its headquarters here for 30 years.

Today, the southern African region is a thriving region on the continent, a region Zambia paid a heavy price to liberate.

Today, we talk not only about regional integration, but through Agenda 2063 and the African Continental Free Trade Area, the vision of continental integration that was built here in Lusaka, under the leadership of President Kenneth Kaunda, has come to life.

I am here today to honour, with you, this giant among men, a baobab, the last of the Founding Fathers who delivered Independence to more than just than his own land. Had it not been for the selfless efforts of his generation, I would not be before you today, as the African Union would not exist.

We are forever indebted to Kenneth Kaunda and the people of Zambia for their sacrifices, and we mourn with you in the understanding that President Kaunda shared himself with all of us, he shared his country and his people. We are privileged generations to have been afforded 97 years with him.

And to ensure that his legacy lives on, the African Union Commission commits to develop a mechanism to ensure that we preserve President Kaunda’s legacy for posterity.

May he rest in peace.”

South Africa’s President Cyril Ramaphosa also delivered a eulogy in honour of the man who hosted the African National Congress during its 30 years of exile.

South Africa joins the people of Zambia and all the peoples of our continent in mourning the passing of our great leader and father.

Dr Kenneth David Buchizya Kaunda was a loyal friend of the South African people. He stood by us during our long struggle for liberation.
Even as the brutal apartheid regime sought to wreak havoc in the Frontline States in its efforts to destroy the liberation movement, Dr Kaunda stood firm, and never wavered in his support for the people of South Africa and the region.

Zambia provided us with material and moral support, and gave refuge to our leaders.

South Africa is grateful we could acknowledge Dr Kaunda’s great role in our struggle for freedom during his lifetime.

In 2002 he was bestowed with one of our highest national orders, The Order of the Companions of OR Tambo in Gold.

Today is the passing of an era.

Dr Kaunda was one of the last surviving leaders of the generation who lit the path to Africa’s freedom from colonial misrule.

He has left us, but we know that what he stood for, the standard of leadership he set, and his progressive ideals, live on.

Dr Kaunda was a man for all seasons.

As a freedom fighter he led the liberation movement to victory and independence.

As a President he led with humility and selflessness. He walked among the people.

He refused to surround himself with the trappings of power and influence.

He was a man of extraordinary empathy.

He was often moved to tears of compassion against injustice.

He was an elder statesman who even after leaving office played an important role in national life, advocating for important causes like HIV/Aids, peace and conflict resolution.

He was a lifelong pan-Africanist who worked to advance African unity and integration. He loved young people.

He wrote of how being among youth always filled him with humility and respect.

He called on Africa’s youth to work hard, to reject lives of idleness and vice, and to be part of nation-building, saying: “The fate of this country is in their hands.”

He was a champion of African self-reliance.

We draw strength and inspiration for this now more than ever, as we find ourselves in the grip of a deadly pandemic.

He would be proud to see us working together to bring a recovery to our continent that is rooted in compassion and human dignity.

Like the mighty and noble African fish eagle that adorns the national flag of Zambia, Comrade KK has soared into the sunset.

He has left a Zambia proud and free.

He has left an Africa united and strong.

In taking forward his legacy, let it be that Dr Kaunda’s teachings on compassion, empathy and dignity are Africa’s gift to humankind.

And that in the words of Steve Bantu Biko, it is we, the peoples of Africa, who bestow on the world a more human face.

Let us go forward, one heart, one spirit, united.

Let us go forward, for equality, for justice, for human prosperity, and for a better Africa and a better world.”