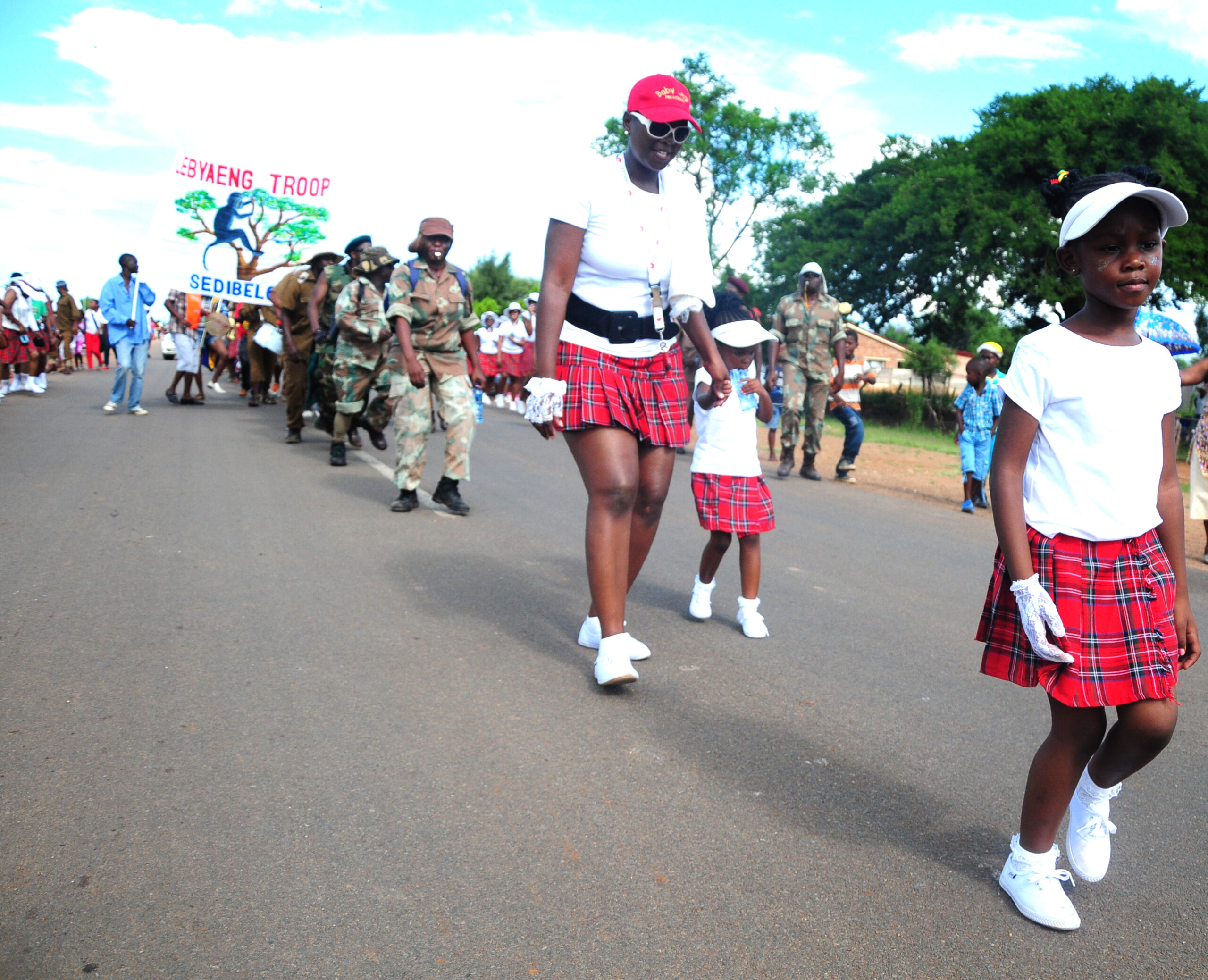 The name Diturupa/Diturupa is a Setswana linguistic appropriation of the English word troop. It was influenced by the participation of black service men who appropriated and refined what they observed in military regiments and their culture. The fact that Diturupa wear a distinct Scottish Kilt or as they say it in Setswana Sekwetshe (scotch) kilt speaks volumes about the inspiration of their military culture. Military training for black soldiers was often limited and politicised because of the fears of white people in the union of South Africa who feared an armed insurrection/mutiny from black soldiers. Another influence on Diturupa is the proliferation of European colonial culture and military culture in the Union of South that was often paternalistic and based on a civilizing mission. Another influence on Diturupa was the annual black commemoration of the WWI called Mendi Memorial Day that was held annually on the 21st of February each year starting in 1928. SS Mendi was a tragic sinking of a ship carrying black soldiers during World War I in 1917.

Diturupa is important as a carnival because it changes our perceptions of events and the politics of commemoration. It challenges our thinking about who and what we commemorate when we re-member the fallen of the First and Second World War. The word Diturupa is taken from the English word “troop” which means a group of soldiers. When translated into Setswana it also sounds like the French word troupe which means a theatrical performance. Diturupa started in 1918 after the WWI when black South African soldiers came back from the war and wanted to commemorate their wartime experience.

Diturupa as a festival man-ages to attract people from diverse walks of life. Most rural festivities in the Setswana speaking world such as Dithubaruba , Dikhwaere and Dikgafela often attract Batswana while Diturupa brings over 30 000 people from different ethnicities and cultures to Makapanstad. The cultural cosmopolitanism can be compared to those that happen in Cape Town during Kaapse Klopse and the carnival festivities in the Caribbean. Thus Diturupa carnival is chosen for its ability to illuminate cultural insights into the past and present realities of the Bakgatlha Ba Mosetlha and their neighbouring communities living near to them. It is an opportunity to look at how marginalised communities can use heritage to give insight into their history of resilience and agency in the face of colonial administration. Diturupa also presents a study in ambiguity. It is an interface between tradition, culture, custom, modernity and cosmopolitanism. Some community members would like to see Diturupa keep its present format of accessibility while others want to see it commercialised.

Diturupa is an event that is mediated by a language dialect that is between Sekgatlha spoken by the older generation and Sepitori spoken by the trendy and hip youth. It is often hard to distinguish the speech patterns of someone from Mamelodi, Soshanguve, Mathibestad, Garankuwa, Majaneng, Atteridgeville and Makapanstad on a linguistic basis. This allows Diturupa to attract people from different ethnic backgrounds. Diturupa is not an ethnically exclusive event. Different communities in the Hammanskraal region come and join in the festivities of Diturupa from Amandebele a Moletlane, Bahwaduba ba Mathibe, Baphuting ba ga-Nawa to Bakgatlha ba Mocha, Bakwena ba Mogopa, and Bakgatlha ba Mmakau. Some of the guests to have graced the occasion include the now deposed chief of the Bakgatlha ba Kgafela Kgosi Nyalala Pilane. Kgosi Phopolo Maubane of the Bakgatlha Boo Motsha boo Maubane. Kgosi Maloka of the Bakgatlha boo Motsha at Marapyane in Mpumalanga province. Princess Lesego Motsatsi of the Batsatsing. Kgosi Motheo Mamogale and members of the Royal family of the Bapo ba Mogale; the late Kgosi Molatlhegi Nawa and the current Kgosi Kabelo Nawa. These are some of the neighbouring royal families who grace the event on an annual basis. Diturupa are also performed during the annual King Silamba Day commemorations by the amaNdebele nation at Wallmanns-thal about 30km northeast of Pretoria.

If mainstream consciousness remembers World War I and II as events of heroic self-sacrifice, defending peace, technological innovation, victory over fascism and defending democracy; then Diturupa forces us to confront a counter memory of racial discrimination, unfair treatment of black soldiers, colonial military coercion and resource exploitation in the colonies. The memory of African soldiers and their participation is significant and cannot be muted as Diturupa demonstrates. This counter memory remains an ongoing project of remembrance and memorializing the efforts of the disregarded black soldier who gave their service for European powers who did not see them fit for democracy and the fruits of freedom.

Diturupa happens in December and is linked to the festive season. As Mokete Sepeng, an elderly grandmother who works with the Makapan royal family and has participated in Diturupa since the 1950s attests:

Diturupa is a Christmas from the Sekgatlha culture. Trupa came with our grandfathers from the war (World War One). They got it from the Scottish. When they came back from the war, they were wearing Scottish Kilts. They drilled for Kgosi Seaparankwe (1904-1966). They did it until it became popular. The WWII made it more popular.

One of the reasons why Diturupa found resonance in Christmas was the fact that the festive season allowed migrants to come home and be part of the commemoration. Seeing the white sol-diers on parade had a profound impact on black soldiers. They then decided to emulate and ap-propriate what they saw in their own homes and context. According to Mr Ranyawa who is a member of the Makapanstad community and one of the organisers of Diturupa:

During World War One, the government took soldiers in different occupations such as cooks, cleaners, runners etc. In the war you do not fight every day, you have breaks. Many people were impressed with Scottish activities when they were wearing Scottish Kilts and drilling in their uniform. They did this in particular during Armistice Day when the WWI ended on the 11th day of the 11th hour of the 11th month.

Another issue is that soldiers who returned from the war were given a raw deal with regards to compensation for war veterans. Black soldiers were abandoned by colonial governments who paid out handsome rewards to white soldiers. White soldiers were given arable farmland, money to pay for school fees, monuments were laid down in their honour and medals were conferred on them. For Black soldiers, they received a pair of boots, jacket and bicycle for their efforts.

According to Rantebeng Makapan, a member of the Mosetlha royal family: “Turupa is a specialty of Ba Mosetlha. We need to spread Turupa to other Bakgatlha.” Symbolising the way Diturupa is a marker of identity and cultural heritage to the Bakgatlha Ba Mosetlha as a Bakgatlha group and gives them a unique cultural imagination. The spreading of Diturupa to other communities is shown in the way Diturupa has been adopted in communities such as Phake, Lefiso, Senotlelo, Nokaneng, Marapyane, Seabe, and Tshikanoshi in the Mpumalanga province; which is evidence enough that the institution of Diturupa has an impact in communities beyond the region of its birth.

For Marcus Ranyawa, a member of Matla a Sechaba group said that “the legacy of Diturupa is to help us to get the youth off the streets. Helps them to listen to their elders. It also alleviates peer pressure and boredom.” This is an important intervention as many rural areas lack recreational facilities and infrastructure. The fact that Diturupa helps with discipline is accredited to its mili-taristic background and origins where discipline and adherence to order and authority are non-negotiable. Diturupa reminds one of a bygone era of Mephato (age set military regiments) in villages which often gave young people a sense of purpose, belonging and adherence to authority. This is not to romanticize the regimental system and make it seem like it was perfect and did not embody some toxic and totalitarian traits. For Mme Matlala, a leader of Sefikantswe Turupa, “Turupa gives elders a chance to give back to their community”, which is an important aspect of Diturupa because most elders return home in old age after working their whole life in cities like Johannesburg and Cape Town. Elders are carriers of knowledge and help to preserve the living archive and repertoire of Diturupa to help the young not to lose the essence of what Diturupa represents.

Diturupa helps in the recovery of hidden history of the African participation in these two world wars that History textbooks in general do not mention. Therefore, learning about Diturupa decolonizes history by including the African soldiers when the lesson is about WWI and WWII. Diturupa is an important event in the cultural consciousness of Makapanstad. It symbolises a rich tradition of forging ahead with no resources but a willing spirit to create a cultural institution that is older than most efforts to centre the experiences of Black soldiers and their experiences during WWI.

Diturupa has come a long way and is changing some of the old traditions that it has been known for. As Virginia Mokone attests, “in the past, Diturupa would only go to Mosate to Turupa (perform) for the king.” Diturupa has been democratised in the sense that one now finds it at the Motlhabaneng sports complex where the competitions are held to determine the Turupa champions. Diturupa has moved from being only a customary ritual that was based at the Mosetlha royal house to being a community wide event held at a communal space devoid of chiefly power and control.

Diturupa makes fresh contribution to the marginalized scholarship and uncovers the hidden history of African/Black participation in WWI and WWII; thus, decolonising the history of these two world wars to show their participation. Secondly, it is indigenous Knowledge Systems that shares a community’s culture and heritage. Thirdly, its continental and diasporic comparisons make appealing for readers outside South Africa in the continent and internationally.