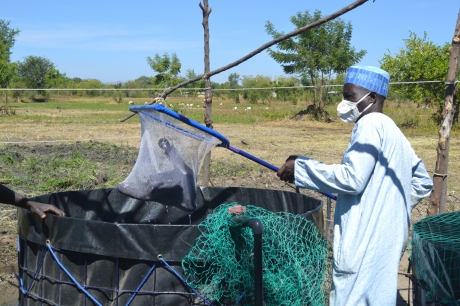 Ganava, a farmer from the Republic of Cameroon, still remembers the day insurgents from Boko Haram burst into his village, seizing his land and threatening to kill him and his family.

“We were forced to flee and hide in the mountains because we feared for our lives,” he recalls.

Ganava comes from Koza close to the Nigerian border in the country’s volatile Far North Region. He, his wife and their 11 children sought refuge 100 kilometres away in the town of Maroua where he has learned new skills in a field he never expected – aquaculture.

He is not the only one. Heavily impacted by the violent insurrection, more than 400 people from the town of Zileng have also learned aquaculture as a way to rebuild their livelihoods and lives.

In fact, since March 2019, over 3 000 people across the country, including refugees and displaced persons in the Far North Region, took part in various FAO projects, that were supported with donor funding from the United Nations Central Emergency Response Fund (CERF) and Irish Aid.

While Cameroon has a fishing industry along its coast in the southwest, aquaculture has been less important in inland areas where crops and animal husbandry have been the more common source of support for livelihoods.

FAO has been working with the country’s Ministry of Livestock, Fisheries and Animal Industries to give farmers and pastoralists training in this promising sector. Fishing equipment and other technical assistance were also provided through the projects.

Aside from the violence in the Far North, the Republic of Cameroon struggles with a high rate of poverty. This combination of violent conflict, poverty-induced hunger and climate shocks have forced millions of people from their homes and destroyed the livelihoods of millions more.

In early 2021, nearly 2.7 million people in Cameroon were estimated to be food insecure and there are more than 300 000 internally displaced people in the Far North Region. The COVID-19 pandemic has added to the daily challenges that many people face.

Breeding fish and building a business

Some of the displaced, like Florence Gasida, once relied on fishing.

Florence, a single mother with five children, comes from the village of Zebe also in the Far North region of the country, where fishing has traditionally been the main economic activity. It was climate change, rather than violence, that forced her to leave because of its impact on local fish stocks around her village. Through an FAO project she is now earning an income through aquaculture.

“Thanks to the training and the support provided by FAO, I can now breed fish myself and sell my products to create a better life,” she says. “I now know how to manage a fish farm, while ensuring the health of my fish.”

FAO has provided training for men and women and also provided equipment and fish feed for participants.

“It is through these initiatives that the people of this region have now discovered the advantages of fish farming, how to raise their own fish and thus contribute to reducing food insecurity,” says Fulbert Haiba-Daliwa, the FAO aquaculture expert leading the project.

“FAO also supports the government by sharing various techniques of fish production through training seminars and supervision for producers.”

With donor support, FAO focused on the need to improve food security in the short-term and to build capacity and resilience in the long-term

Since the project began, the fish farmers have produced nearly 1 700 kilogrammes of fresh fish. FAO has also trained women on processing techniques, such as drying techniques for the fish, in order to minimize food losses.

“The idea is to provide people with skills and knowledge that will enable them to be resilient in the face of economic, social, and ecological difficulties that could occur in the future,” says Haiba-Daliwa.

Strengthening food security in the region

The project not only promoted aquaculture. By combining fish farming and market gardening, the farmers were able to apply innovative techniques for using water from their fish tanks to irrigate their crops and minimize the use of chemical fertilizers.

The communities have also benefited from quality agricultural seeds and motor pumps for water drainage. More than 500 vegetable gardens and 20 fish farms were also established in the region with FAO’s assistance.

“We are seeing the benefits of the skills acquired and the resources made available to us; the support from FAO and the government has never been lacking, we are grateful for it,” says Siddi Yankabe, president of the Zileng community.

“In the future, we wish to invest in diversifying our fish production. We want Zileng to be a true example for surrounding communities of development through food security.”

Audun Lem, Deputy Director of Fisheries and Aquaculture at FAO, says Sub-Saharan Africa has great potential for aquaculture. “Not only does aquaculture provide jobs and secure livelihoods, it provides vital food and micronutrients in a region with fish consumption much below the world average, in fact less than half the world average,” he said.

With the support of its financial and technical partners, FAO is working to stem food and nutritional insecurity in Cameroon while enhancing the resilience of the most vulnerable people in the country. The aquaculture project is an important step in this direction. www.fao.org