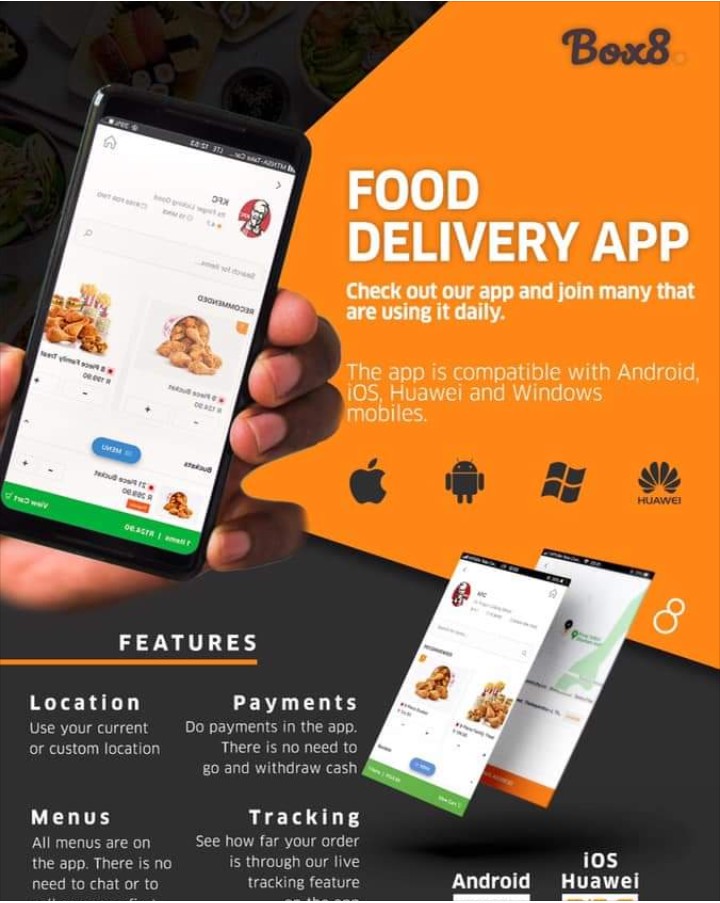 Residents of Limpopo’s villages will now be able to have food, medicine and liquor delivered to their homes thanks to a new app specially designed to serve rural areas.

Inventive entrepreneur Thabelo Mandoma of Thohoyandou has created the Box8.co.za app which caters for rural villages where there are hardly any street names and are located far from shopping centres.

“This is not a new technology as there are many food delivery services in South Africa – what is new is the piece of algorithm that enables our technology to function in rural areas where there are no street names or defined landmarks,” Mandoma, 27, told Mukurukuru Media.

The Computer Systems Engineer matriculated from the famous Club 100 Mbilwi Secondary School in 2011 and went on to study Aeronautical Engineering at the University of Witwatersrand for a year.

In 2013, he then enrolled at the University of Johannesburg studying towards a Computer Systems Engineering course. He is currently based in Gauteng and works as a Flight Simulator Engineer.

“We started operating on Valentine’s Day with just one restaurant on the app because people were to celebrate the day under the Covid-19 restrictions. We used the opportunity to launch and advertise our app,” he said.

Mandoma explained that through the app, a customer places an order or through their website. “The order will be received by the restaurant or store and they will accept it and start preparing the food item ordered,” he said.

“As soon as the restaurant accepts the order, the driver who is supposed to deliver the order will then receive a notification of the order that he or she has to collect and deliver,” said Mandoma.

He said the customer would be able to track the progress of their order, the name and picture of the person bringing their order and how far the person is.

“When the order gets to the customer, the customer gives the driver a unique code that he will enter on his or her app to show that the delivery was completed successfully,” he said.

Unlike most of the popular food delivery apps that charge a certain fee for deliveries, Box8.co.za does not have a fixed delivery fee because of the algorithm and technology it uses.

“This is also because of the distance between the restaurants and where people stay. So, delivery fees are charged on a dynamic base. This means, the further ones stays from the restaurant, the more they will pay as compared to those who are a kilometre away,” he highlighted.

“Currently, we cover up to 15kms from Thavhani Mall and are working on increasing this coverage in the coming months. We are already implementing plans to operate in Nzhelele, Elim and Makhado,” he added.

The app, which is already on Google Play Store, can be downloaded on any smart gadget for a minimum of 1.0mb. According to Market Research.Com, the South African Mobile Apps market had total revenues of $4.0bn in 2018 and is set for further growth by 2023. Due to his background in programming, it was easy to get the app into the digital distribution. “The biggest challenge I had to overcome was getting to convince stores or restaurants to be part of the app. It was not easy at all. Some of the franchisees are still to return my calls, emails and even to go through my proposals,” he said. Box8.co.za’s services are not only limited to food deliveries but includes medicine and liquor. Mandoma currently employs eight drivers and two admin staff. He hopes to extend his service to cover the entire province.

“I also want to see market vendors and spaza shops delivering their items on Box8.co.za. The day that we will be able to buy fat-cakes, kota and tomatoes through the app will be the day the dream will be unfolding,” he concluded – roli@mukurukuru.co.za