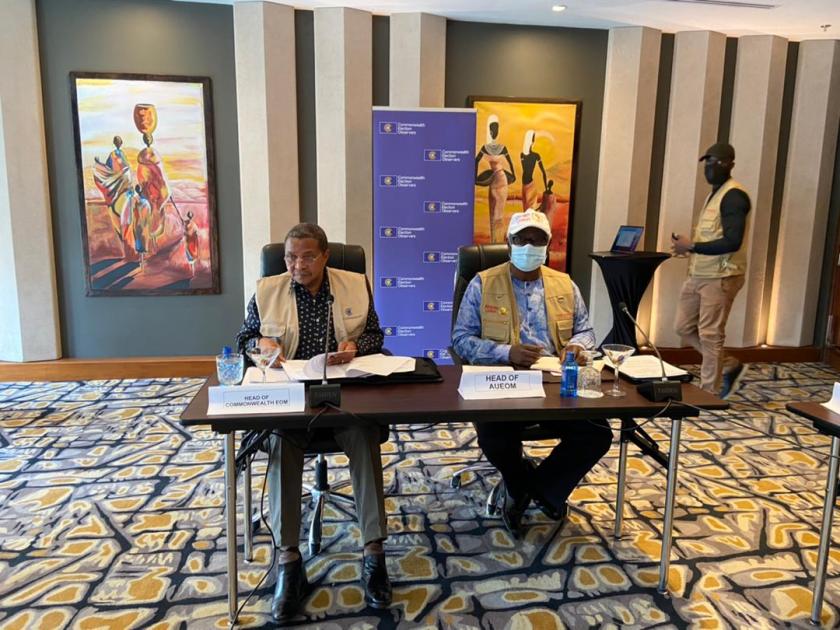 The African Union’s Election Observer Mission (AUEOM) has declared that election day operations in Zambia “were conducted in a peaceful, transparent and professional manner”.

The AUEOM said this was despite “reports of the unlevelled playing field and politically motivated violence during the pre-electoral period, and Covid-19 related challenges.”

“The Mission calls on all stakeholders to remain peaceful and calm while awaiting the announcement of final results by the Electoral Commission of Zambia. The Mission urges all political leaders and their supporters to not undertake any action that will undermine the peace and stability of the country,” head of the mission Dr Ernest Bai Koroma Head of AU Election Observation Mission said in a statement on Saturday.

Zambians went to the polls on Thursday, 12 August. This was the seventh general elections since the reintroduction of multi-party politics in 1991.

The polls come just two months after the death of the country’s renowned former president Dr Kenneth Kaunda. The freedom fighter and former statesman passed away in Lusaka in June.

The AUEOM noted that “16 candidates contested the presidential election, but the political landscape is dominated by two major political parties, the PF (Patriotic Front) led by incumbent President Edgar Lungu and the UPND (United Party for National Development) led by Hakainde Hichilema. This was the third time in a row that the two candidates competed against each other, with the previous two decided by narrow margins.”

Reports from Lusaka on Saturday suggested that Hichilema had taken an early lead over Lungu. Hichilema was reported to have tallied 171,604 votes against the 110,178 garnered by Lungu in results for 15 constituencies.

Lungu had earlier claimed the results to be rigged but Hichilema’s camp dismissed this as a sign of desperation by an outgoing administration.

Hichilema posted on his Twitter account on Saturday: “As the sun rises on a day of destiny for Zambia, our message to those responsible for counting the votes is simple: “Justice, and only justice, you shall pursue, that you may live and possess the land which the Lord your God is giving you” (Deuteronomy 16:20).”

On Saturday night the BBC reported that the announcement of the results at Zambia’s electoral commission had been temporarily halted with some party agents criticising the commission for attempting to announce some results which had not been verified.

The AUEOM to Zambia which comprised 30 observers, four independent electoral experts and a technical team noted “that the 2021 general elections took place against a backdrop of heightened political tension in the country that can be traced back to the 2016 disputed elections, where post election violence resulted in the arrest and detention of several opposition members.”

The mission also noted that “the tense political situation was compounded by a shrinking economy which was exacerbated by the global Covid-19 pandemic that has resulted in increased socio-economic inequalities and social disenchantment by citizens.”

“Evidence of the heightened political situation in the country can be seen from the spate of violence, hate speech and misinformation reportedly carried out by political parties supporters, particularly those from the Patriotic Front (PF) and the United Party for National Development (UPND), during the election campaigns. Concerns over the increased spate of violence prompted the deployment of the military for the first time during an electoral process.”

The election day findings by the mission include that “the atmosphere on Election Day was peaceful and calm with no incidents of violence witnessed.”

“Although long queues were observed throughout the day, they were largely orderly, except in a few isolated cases where the crowd was rowdy.”

The AUEOM said all polling stations visited by its observers had the full complement of six staff, of which, on average four were women and that materials were also available in sufficient quantities.

The AUEOM has recommended that the government of Zambia “urgently undertake measures to address underlying factors of increasing tension and politically motivated violence through inclusive dialogue and engagement with other stakeholders.”

Both Lungu and his rival Hichilema posted what appeared to be conciliatory messages as vote counting continued.

Lungu tweeted on Saturday night: “Let us continue praying for our nation, that the peace we have known for so many years will hold, and let us remain hopeful that we will emerge stronger and united as a people after this episode. We are a people of hope and Christ our hope remains faithful.”

As the wait for election results continued on Sunday morning, Hichilema wrote on his account:“As we move beyond the campaign period, let us all agree to put Zambia first. We are one nation, one people, one Zambia. We must come together, united by a common love for our country and our people, so that we can begin moving Zambia forward.” – Mukurukuru Media