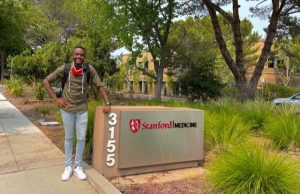 DR Graham Chakafana, a Protein Biochemist who is a University of Venda (UNIVEN) graduate, has recently secured a postdoctoral fellowship position at Stanford University School of Medicine, in the United States of America.

His research focuses on the role of proteins in signaling pathways associated with the progression of diseases. Proteins are major drug targets, hence the work that he does interfaces with intervention efforts against diseases.

Dr Chakafana grew up in Masvingo in the southern region of Zimbabwe.

“I was subsequently awarded the MSc with distinction and I also received several awards for graduating as the best student in the Faculty of Science,” he said.

Dr Chakafana further said that, few months after completing his MSc, he moved to South Africa to pursue PhD in Protein Biochemistry at the University of Venda under the mentorship of Prof Addmore Shonhai and Dr Tawanda Zininga.

He said that he specifically joined the Protein Biochemistry and Malaria (ProBioM) research group which was led by Prof Shonhai. ProBioM mostly focuses on the role of heat shock proteins in the development and pathogenicity of malaria.

“Some aspects of my PhD work were conducted at the Protein Structure and Function Research Unit (PSFRU) based at the University of the Witwatersrand. Joining ProBioM was the defining moment in my career. I was privileged to receive a grant holder bursary to support my studies through a grant awarded to Prof. Shonhai by the Germany Research Foundation (DFG),” he said.

In addition, he was also awarded support by the National Research Foundation (NRF) of South Africa.

“Overall, my PhD journey had a lot of ups and downs, as any PhD student would testify. At some point, I felt like quitting my PhD. Scientific research is not an easy undertaking especially when acquisition of new skills is an essential part of the study project. However, the skills that I mastered under my PhD mentors’ guidance have proved priceless.”

He explained that, in 2018, a team of experts from BioNavis, a Finland based company that specialises in making analytical equipment to study intermolecular interactions visited their lab (UNIVEN Lab) and he managed to gain hands on training in Surface Plasmon Resonance (SPR) based analysis.

SPR is a cutting-edge technique widely used in studying protein-protein/ligand interactions. The generation of quality data was central to the work that we used to conduct in the ProBioM research group. This instilled in me a work ethic of focus and hard work.

Just after submitting his PhD thesis, he was offered a position at the Cape Heart Institute (CHI) within the Department of Medicine at the University of Cape Town where he worked under the mentorship of Prof Karen Sliwa, who at that time was the President of the World Heart Federation (WHF). At CHI, he managed to author several articles relating to COVID-19 and cardiovascular disease with some leaders of the WHF. Some of this work has been listed on the World Health Organisation (WHO) website as recommended reads.

Dr Chakafana graduated his PhD in Biochemistry in September 2020 at the University of Venda. In March 2021, he was invited to an interview for a Postdoctoral Research Scientist position in Cardiovascular Proteomics with Stanford University in California, USA. He said the interviewers requested him to present a summary of the PhD research work which he conducted at the University of Venda. He then contacted his PhD mentors who were happy to assist him with preparations for his interview.

“I am extremely grateful for the coaching provided by both Prof Shonhai and Dr Zininga in preparation for my interview. A few months down the line, I landed in the Silicon Valley to begin my new position at Stanford University. My stint at the University of Venda was indeed crucial in deciding my current career trajectory.”

He said at Stanford University, he will apply his skills in protein biochemistry to study the role of signaling proteins in the development of heart failure. The ultimate goal of this research is the identification and development of novel drug interventions against heart failure.

Given that cardiovascular diseases are the leading cause of death globally (accounting for approximately 32% of all deaths), this research has potentially far-reaching practical applications.

“This motivates me to commit my attention to this noble and rewarding area of study. My experience in our humble ProBioM lab at the University of Venda has taught me that great science can happen anywhere. The training I received during my PhD opened doors for me at an international stage and now I am privileged to be working at one of the best labs in the world.”

“The University of Venda has a warm and friendly culture. At UNIVEN, I made lifetime friends who turned into extended family. The staff within the Biochemistry Department also deserve special mention for their unwavering support towards student learning and progress.”

“Martin Luther King once said ‘If you can’t fly, run. If you can’t run, walk. If you can’t walk, crawl. Whatever you do, move forward’. Nobody wants hurdles in life, we all want things to go smooth. Unfortunately, COVID-19 has placed a hurdle for research. My advice to graduate students affected by COVID-19 would be to do the best you can under these not so conducive circumstances. One day COVID-19 will end but, in the meantime, do something.”

The HoD of Biochemistry Department in the faculty of Science, Engineering and Agriculture Prof Addmore Shonhai, said he is excited to follow that his former student was offered a postdoctoral position at the prestigious, ivy league institution, Stanford University.

“To train a student who moves on to join Silicon Valley is the dream of anyone doing the job I do in this humble setting! It was a pleasure to guide Graham during his PhD study. He is hard-working and focused. His career progress serves as an inspiration to UNIVEN students that nothing stands in their way towards realising their career goals,” said Prof Shonhai.

“Furthermore, Graham’s career achievement further helps us to debunk the notion that previously disadvantaged institutions produce sub-standard products. To secure the position at Stanford University, Graham presented his PhD work. I had the privilege to assist him organise his presentation for the interview. It is encouraging to note that he was recruited based on the strength of the work he did here at UNIVEN. As someone who closely followed his recruitment by Stanford University, I am convinced that he is not going to this ivy institution only to receive but goes there as a UNIVEN emissary on mission to share skills in Proteomics and Protein Biochemistry that he gained back at this institution.”