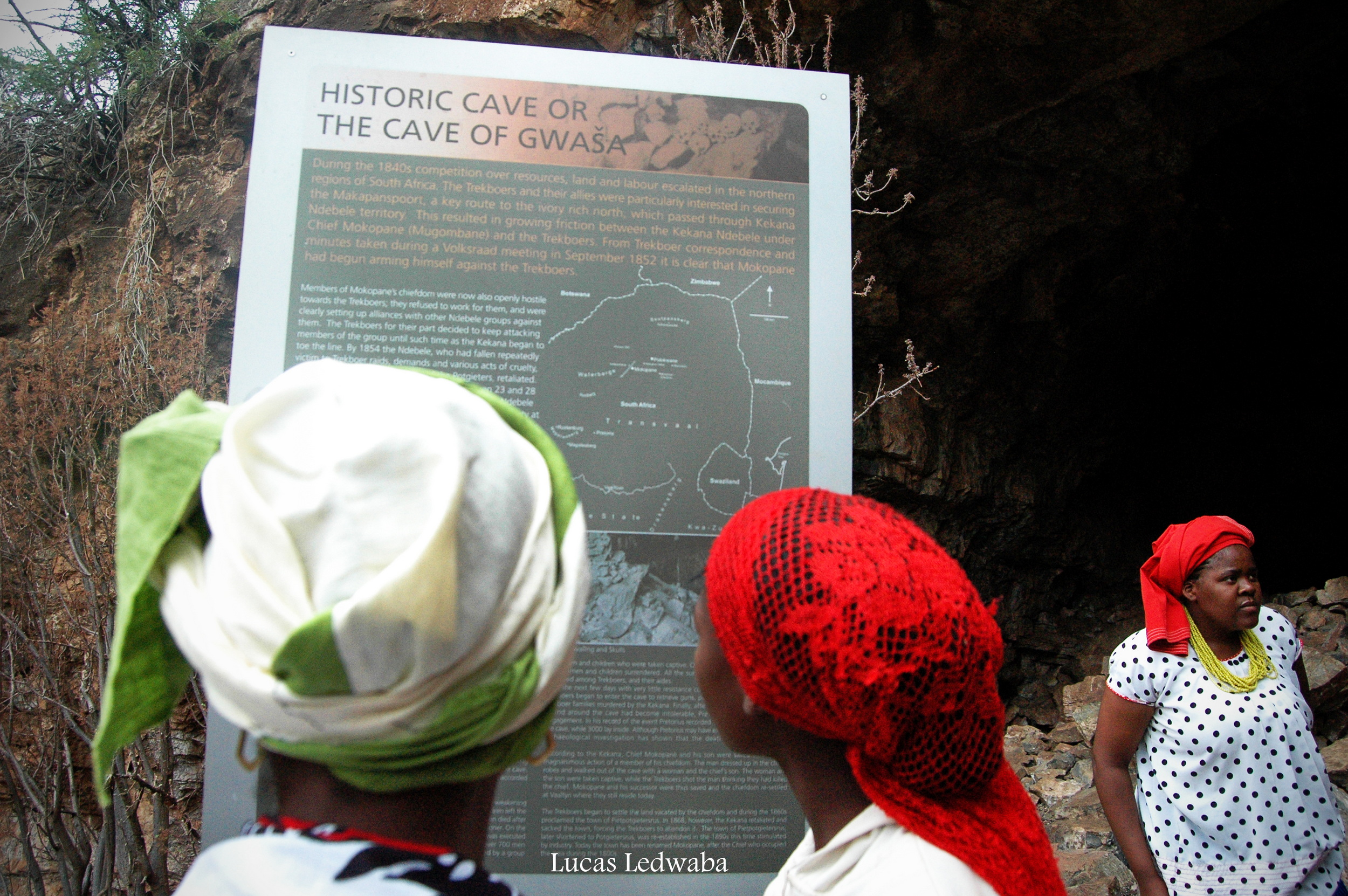 HISTORY can be cruel sometimes. Cruel, because it gives you so much, yet still leave you with so little. It provides few answers and so many unanswered questions that may remain forever unanswered.

I live with the lingering question of what exactly transpired in the final moments of my people, MaNdebele a se Nyakatho [Northern Ndebele] when more than 3 000 of them were massacred during the siege of Gwasha [Xoasha] near Mokopane, Limpopo, in October 1854.

I have never stopped wondering, since I first read about this tragic part of our history in Reader’s Digest Illustrated History of South Africa – The Real Story, back in 1989, as to what exactly went on in those caves above the great mountains.

This was the first ever piece of our history I had come across in my quest to understand where we come from, to know exactly who we are.

And ever since, I have not stopped wondering, what did they do, when their attackers, the Voortrekkers, assisted by Bakgatla and Shangaan people, piled wood and leaves and grass and set the great cave where the MaNdebele had sought refuge on fire in a bid to force them out?

Did the women and children cry and scream and plead for mercy? Did they try to jump over the stone walls they had erected at the entrance to the cave in a desperate attempt to flee and spare their lives? Did they in a bid to stay alive, try to extinguish the raging fire with their bare hands? Did the men curse and swear? Did they recite battle cries in defiance? Did they attempt to wage a final battle to wade off their aggressors?

I may never know all this, for isn’t such the cruelty of history? It leaves you hanging, wondering, assuming. The past, that’s what it does, always poking its nose in the present, to torment and harass you.

I found the past toying with my emotions during my first and only visit to Gwasha [Rhwasha] back in September 2011.

Standing there in the shadow of the great mountains where strong winds howled eerily, I asked myself, what do you do when you walk in a place where you are told, more than 3 000 of your people were massacred over 100 years ago?

Do you curse the descendants of the killers? Why? What has it got to with them? Is it worth it? You wonder, should the injustices of the past determine how we treat each other in the present and future?

I wondered what I would have done had I been present on that fateful day 157 years earlier? Would I have fought back, fled or choose to die rather than surrender?

I don’t know. I wish had answers to all this. I wish I wasn’t curious about our past, because history can hurt you, badly. I find it hard to explain what I felt, standing there. It wasn’t anger I felt, it wasn’t grief either, but a deep, haunting emptiness.

I’m left wondering again, who were these people, their ages, what were their dreams and aspirations. Perhaps knowing all this would fill this gaping emptiness that cries for answers from this tragic event of decades past.

After the visit to Gwasha, I wrote the following article, which was published in the City Press newspaper on 3 October 2011:

HE resembles a warrior from centuries past, his large frame draped in an intimidating outfit of libeshu (loincloth) and a poriana (sleeveless top) made from animal hides.
An identical headband fashioned from the tail of a leopard is drawn across his forehead.
He pants heavily as he leaps in huge strides up the road that twists and turns some two kilometres up the mountain of Makapan’s Valley near Mokopane, Limpopo.
He punctuates his march by constantly jabbing the air with his spear.
Like many, Gojela Kekana – a descendent of King Mugombane – learnt about the 1854 siege at Makapan’s Cave from stories passed down by elders.
It happened in a different time but the pain in his voice is a reminder of what the siege still means to the MaNdebele.

It is known that more than 3 000 people were massacred by regiments of Voortrekkers assisted by Shangaan and Bakgatla people. But there is no way of telling what happened in their final moments.
Did the MaNdebele go to their deaths singing defiantly as clouds of smoke from a massive log and grass fire forced them out of the cave?
Did they try to run from the cave while their attackers stood waiting with rifles and spears?
Perhaps their harrowing cries still haunt the intricate tunnels underneath the mountains.
The ascent towards the caves on Heritage Day will never provide answers to this question, but it’s part of MaNdebele’s efforts to understand their past.
The rites started early last Saturday.
The persistent barking of baboons was drowned out by incessant drumming, accom-panied by the haunting wailing sound from a troupe performing tikxolo (traditional flute and drum music).
Old men and women, united in remembrance of events from a bygone era, pierced the cool air with ululation and reciting of praise songs.
They were here to celebrate and mourn, to remember a past they were not a part of but which very much belongs to their cultural history.
The visit to the site was organised by the Makxobogeja Heritage Foundation, an organisation formed to preserve MaNdebele history, culture and language and reclaim what is theirs.

Ndile Ledwaba, the organisation’s founder, says their efforts are in part aimed at changing the name of Makapan’s Valley to the original Mugombane Valley and Makapan’s Cave to Xoasha Cave.
Struggling up the hills, Kekana’s voice breaks with what could be a combination of anger and grief.
“This whole thing stirs my emotions. It breaks my heart to think that so many of our people were killed here,” he says, his face and hands glistening with perspiration.
“We were almost wiped out as a people. It is sad,” he says.
His loud, animated voice attracts a group of youths who are part of hundreds of people climbing the mountain.
Behind us, old men and women, eager not to miss out on the historic visit to the caves, lean on canes and umbrellas while some hold the hands of younger relatives for support.
Youngsters, spurred on by a hunger for history, draw from reserves of youthful energy to keep up.
It’s a festive mood, although back in October 1854 there would certainly not have been any jovial singing or dancing in these caves.
They say it all started some time in the winter of 1854 on the banks of the great river Mogalakwena.
MaNdebele warriors, under King Mugombane, massacred a group of Voortrekkers led by Piet Potgieter.
The town of Potgietersrus was named after him but renamed Mokopane, after King Mugombane, following the political changes of 1994.
The attack on the Voor-trekkers was apparently the result of months of clashes over land and Potgieter’s brutal attempts to force MaNdebele into forced labour.
They say the MaNdebele warriors spared the lives of two Voortrekker children, shaved their heads and smeared their bodies in red ochre as a sign of humiliation.
Weeks later, a regiment of Voortrekker hunters found the children wandering through the bushveld. Shocked, they rushed back to Pretoria on horseback to report the murder of their people.

But back in the land of MaNdebele, the prophets and wise men of the tribe had already warned King Mugombane that the white people were planning to avenge the deaths of their people.
In preparation for imminent attack, the MaNdebele retreated into the network of caves in the mountains west of the Mogala-kwena river.

There they barricaded the entrance to the Xoasha caves with rocks.
For months they lived in the caves with their cattle, grinding millet and sleeping there, only going out to find water in the mountains.
A hush falls over our group as Martin Masedi, a tour guide at the historic caves that were declared a Unesco World Heritage Site after the discovery of fossils believed to be millions of years old, relates the events of that year.
As prophesied by the seers of the tribe, the Voortrekkers did return to avenge their dead, assisted by regiments from the Shangaan and Bakgatla people.
After stalking the caves for a while, the regiments saw women and children emerging to search for water.
The regiments discovered that the MaNdebele had barricaded the entrance with rocks.
As Potgieter stood on a rock to peep through into the cave, he was shot from the inside with a rifle that was one of the spoils from the massacre at the Mogalakwena river.
A plan was later hatched to force the MaNdebele out of the cave by burning logs and leaves at the entrance.
Masedi explains that most of the MaNdebele died from smoke inhalation, tsetse fly infection or dehydration.
Later the bodies of 3 000 people were recovered from the cave and 900 others were found outside. But King Mugombane apparently made a daring escape after his subjects tied him to the belly of a cow which they let out of the cave at night.

A number of MaNdebele escaped through a tunnel to emerge in present day Zebediela, some 50km away.
As they listen, the faces of the elderly are covered in a quiet blanket of sadness. The young ones listen with a twinkle in their eyes, fascinated to learn about where they come from.
Walking down from the cave, I hear the wind howl eerily, and wonder if perhaps this was the last thing the MaNdebele heard before they perished all those years ago.