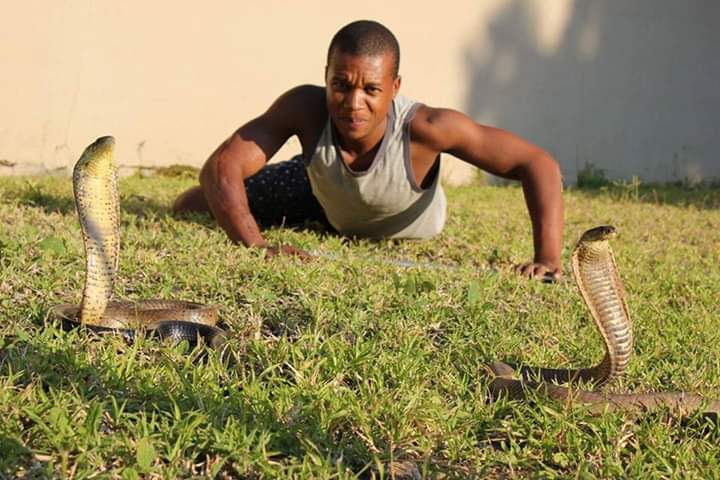 THE deep scars edged on Fortune Sibiya’s right arm are a constant reminder of his close encounter with death – he was bitten by a highly venomous forest cobra and spent a whole year in hospital recovering.

Another scar on his hand is evidence of a bite by a massive Nile crocodile. Both his eyes are slightly damaged after three separate rough encounters with Mozambican spitting cobras which spat venom at him while doing what he loves best, rescuing snakes from homesteads in the rural villages near Hluhluwe in northern KwaZulu-Natal.

After recovering from the near fatal bite, Sibiya who is known by his nickname Cobra, quit his job as a snake handler at a reptile park in Hluhluwe and dedicated his life to saving snakes and people.

While he was in hospital recovering he heard of a case of two children that were also admitted because of snake bites. One of the boys died, a factor that weighed heavily on Cobra’s decision to quit his job.

“I felt that my work is needed more out there, not in snake parks where I am watched by a few people. The death of the child in hospital made me realise that I have a duty to do in society,” says the slightly built man with an easy smile.

Cobra visits schools and holds regular workshops in communities to create awareness about snake behaviour and how to react in an encounter with one. He also gets regular calls from alarmed residents to help retrieve snakes in their homes.

“Snakes are just ordinary animals. But there are many beliefs that make people fear them. My mission is to save snakes and people’s lives, especially children who are the most vulnerable,” he says.

Cobra wants to reach as many communities and people as possible. Twice a month he is featured on a radio show on Ukhozi FM, the country’s station with the largest listenership, educating listeners about snakes. His wish is to start his own television programme.

“I want the programme to be presented in African languages, so that it’s understood by everyone, especially children,” he says.

He also wants to establish a reptile and wildlife awareness centre targeting people in rural areas and townships especially.

Cobra argues that while such amenities are available in urban areas, they are far from many communities who cannot afford the costs of travel and must contend with language barriers.

“If people understand animals and snakes, and get to love them, we will not have such high incidences of snakes being killed or animals being poached,” he says.

A research study by the University of KwaZulu Natal noted that the province and Mpumulanga have the highest incidences of snakebites in South Africa, with 24 -34 per 100 000 people being bitten annually.

According to the study titled Snakebite in north-eastern South Africa: clinical characteristics and risks for severity (Wood et al), the snake species most commonly responsible for serious snakebites in KwaZulu-Natal are the puff adder, and the Mozambican spitting cobra.

The study also cites other snakes responsible for severe bites in the province as the forest cobra, black mamba, green mamba and the snouted cobra.

Although he almost his sight and his life because of snakes, Cobra does not blame the reptiles and speaks of them with much adoration like one would about a loved pet.

“They are just snakes. That is how they defend themselves,” says the 38-year-old.

“They get stressed when you capture them. That is why after a capture, I feed them, give them water and check up on them. Once I am satisfied with their progress I release them far away from people,” he says.

His relationship with the reptile species started in his youth when he found a part time job as a cleaner at a reptile park in his hometown in 1998. He was fascinated by the reptiles, always reading up information about them and watching their behaviour.

“I used to read those posters put up on their cages and I realised, no man, I can do this,” he says.

After completing his schooling, he worked fulltime at the snake and reptile park and learnt the finer points of snake handling and crocodile wrangling.

“I believe that I was called for this. Nature called me. I have never done any other work,” he says.

When he was bitten by the forest cobra in May 2011, he was performing a show for tourists as part of his duties at the snake park. Remarkably, after being bitten, he continued with the show instead of seeking urgent medical attention.

“I did not want to disappoint the tourists. I also did not want to scare off visitors to the park because there were always visitors coming from all over the world. It would have been bad for business,” he says.

He was rushed to hospital in Richard’s Bay, about 100km away after the show. He was in a coma for a week and then spent an entire year in hospital, recovering from the snake bite.

“I was eating through tubes and reliving myself through pipes inserted into my body. My hand was swollen this biiiig, it was blue in colour and smelling like rotten flesh. It was emitting puss and fluid. I was incredibly lucky to survive that,” says Cobra about his hospitalisation.

His exploits with snakes once earned him a visit from a rather unusual, but revered visitor, the late King Goodwill Zwelithini of the Zulu nation.

“I was really honoured to be visited by iSilo. He told me he had heard about my work at the reptile park and he was fascinated by the fact that a black man was doing this kind of thing,” says Cobra, who also wrestles with crocodiles.

He almost lost his hand when he was bitten by a Nile crocodile at the reptile park when he tried to separate them while they were engaged in a fearsome fight.

“I knew if I let them fight they would kill each other. So, I had to step in and stop them. That is how I got bitten,” he says with a chuckle.

The slightly built man assists communities living along the Hluhluwe river to capture crocodiles that prey on their livestock and people. After catching them in cages designed specially for this purpose, they are carried to be released in an area where the river is far from villages.

“A crocodile is an immensely powerful animal. It is also very heavy and strong. That is why it needs to be kept away from people,” he says.

Cobra advises that to avoid snakes finding refuge in homes, people should learn to keep their yard clean of rubble and dirt.

“Snakes follow the scent of rats and frogs. They are just looking for food. If they find rubble in the yard, they will hide there and that is how the conflict with people happens,” Cobra says. – Mukurukuru Media