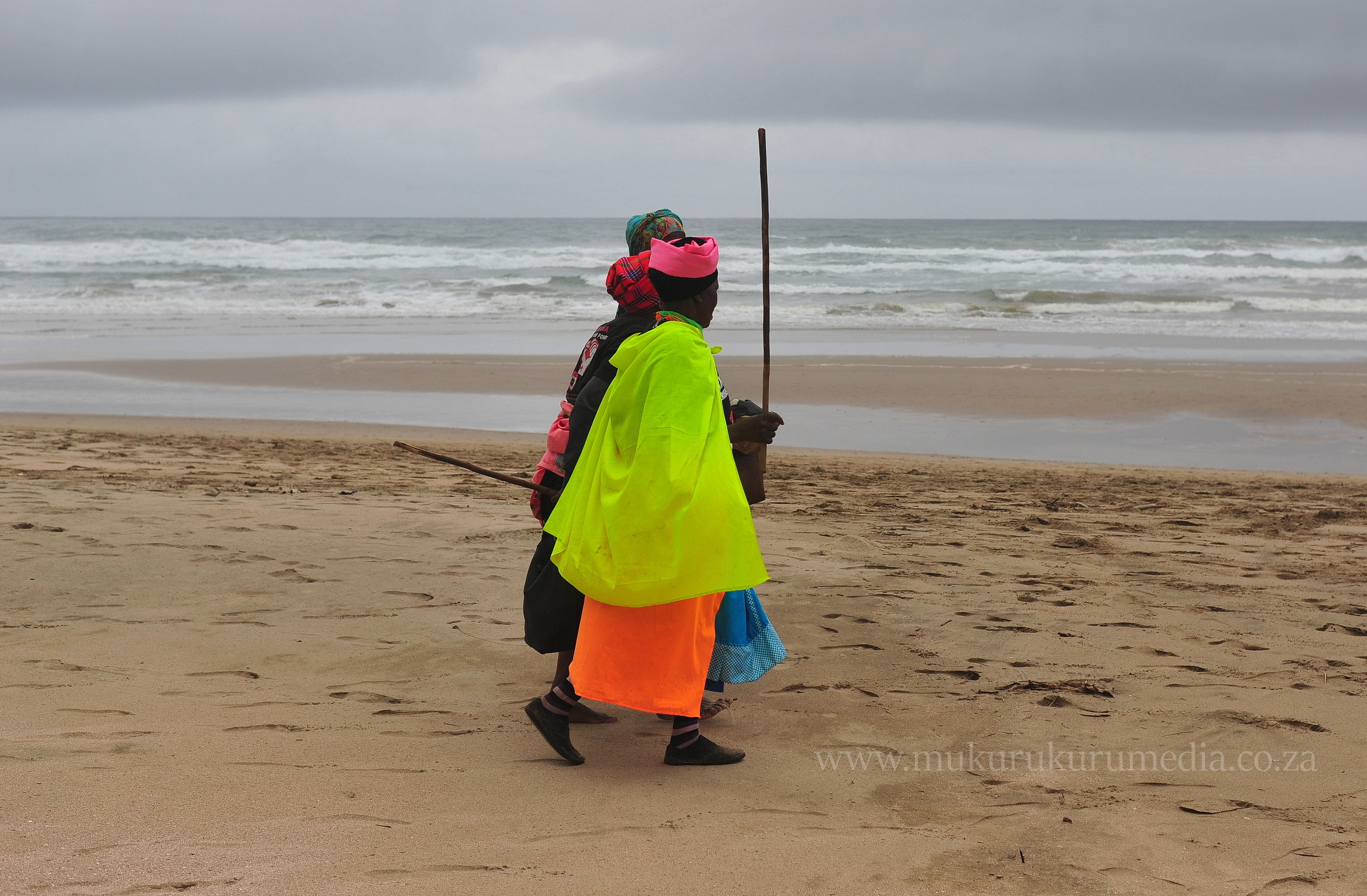 Nigeria’s oil fields where Shell has been operating for decades have been described as a wasteland in which oil spills have led to destruction of human lives and biodiversity. A legal battle awaits as the petroleum multinational now has its oil drills focused on the Wild Coast raising fears the pristine coastline could become another environmental disaster writes Lucas Ledwaba

Amadiba community elder Mfekethwa Dlamini does not recall any moment that he and his family had to buy seafood from a store – the sea has always been their provider.

He grew up in Sgidi, one of the rural villages along the Eastern Cape’s Wild Coast and to this day, he still walks to the Indian Ocean to collect fish to eat with his family and some to sell.

“We get mussels, abalone, fish, sardines, and crabs from the sea. We feed from those since birth, we raise our kids through them. We also want our children to see how land is preserved, especially in an era of unemployment like this,” said Dlamini on 4 December, a day before protesters took to the coastline to march against Shell’s proposed plans to conduct a seismic survey along the coast.

Dlamini joined other elders at the primary school in Sgidi to discuss the latest attempt to mine mineral resources from their ancestral land and how they feared it would impact on their traditional way of life and livelihoods.

In the past two decades, the Amadiba community have fought a bruising legal battle against Australian company Transworld Energy and Minerals [TEM] and the Xolobeni Empowerment to mine titanium on their land.

Sikhosiphi Bazooka Rhadebe, a leader of the Amadiba Crisis Committee was shot and killed by unknown gunmen in a suspected assassination in 2016 in one of at least 12 killings perpetrated by alleged assassins against those opposed to the mining, using various methods including poisoning since 2000.

The community is also still engaged in a legal battle against the SA National Roads Agency Limited’s (SANRAL) efforts to build a highway that would cut through their villages.

Amadiba argue that rather than building a highway, government should instead improve the existing access roads to the area as the highway would lead to relocation of homesteads, graves and most crucially, destroy the agrarian economy that has sustained the community for over a century. Now they are fighting to protect the ocean which is more than just a provider of fish.

“The sea represents cleansing, because it flushes out all dirty material,” said another elder, Desmond Mbuthuma reflecting on the spiritual significance the people attach to the ocean.

To the Amadiba, the ocean is more than just a place where nature provides food. It plays a significant role as a healer of broken spirits, a therapeutic spa courtesy of mother nature.

“The sea is superior to the river. It never fills up. When people go to communicate with ancestors in the sea, they come back healed,” said Mbuthuma.

Elder Mfihlelwa Mnyamane whose two close family members were killed during the Mpondoland revolt between 1959 and 1961 said the people and the sea are interconnected in many ways.

“We are more like shareholders to the sea, for we catch crayfish, fish and crabs from it and sell. We get abalone and mussels, with which we feed our children without having to go to the shops. That is why we regard the sea as a natural resource from which we grew up and continue to live from,” said Mnyamane.

Even youth like Lonwabo Dlamini have learnt to appreciate and protect the sea. He works as a tour guide for Pondoland Tours. During his outings with tourists, he shares his knowledge of indigenous plant species and marine life which he fears would not survive should the area be transformed into an oil field.

“The sea has a healing effect,” said Lonwabo who like many of his peers living along the coast managed to pay for his schooling through income generated from selling crayfish collected from the ocean.

“If Shell would be allowed to conduct their business, it would affect our work as tour guides because we would not be able to show tourists the tourist attractions, as the sea would be contaminated,” said Lonwabo.

In a paper published by the International Journal of Science and Technology in 2015, Paul Peters Ugboma further highlighted the environmental impact of the exploration in Ogoniland.

“Due to oil exploration and other human activities in the Niger Delta region, there is evidence of environmental degradation all over the area (Oronto, 1998). Environmental degradation is occasioned by consistent flow of industrial waste, oil spills, gas flares, fire disaster, acid rain, flooding erosion, etc., which has led to the pollution of farmlands and fishponds. It has also led to the destruction of properties and human lives, including aquatic and bio-diversity,” wrote Ugboma of the Department of Geography & Regional Planning, Delta State University in Nigeria.

A United Nations Environment Programme study on Ogoniland published in 2011 found that there were, “in a significant number of locations, serious threats to human health from contaminated drinking water to concerns over the viability and productivity of ecosystems. In addition, that pollution has perhaps gone further and penetrated deeper than many may have previously supposed.”

According to the organisation Friends of the Earth International, between 1976 and 1991, over two million barrels of oil polluted Ogoniland in 2,976 separate oil spills. In August Shell agreed, following a protracted legal battle to pay the Ogoni $111.68 million to settle a case over an oil spill that took place more than 50 years ago. Shell said it has produced no oil or gas from Ogoni fields since 1993, although Ogoni land continues to serve as a transit route for pipelines transporting both its and third-party oil production from other areas.

In its response to concerns over its plans to conduct a seismic survey along the Wild Coast, Shell has argued in a statement that is a responsible and leading operator and applies stringent controls and international best practice guidelines to its operations.

“Procedures for managing impact from seismic activities are well established and in line with the latest global industry standards. We aim to minimise the impact of our projects on the environment and to be a good neighbour wherever we work, by contributing to the well-being of neighbouring communities.”

The company said it works “closely” with neighbouring communities “to manage the social impacts of our business activities, address any concerns about our operations, and enhance the benefits that we are able to bring. As an organisation Shell is committed to protecting the environment.”

The company said a full environmental study was conducted in line with regulatory requirements and a legal permit was obtained to carry out the activity. “Shell is committed to fully implement all the mitigation measures as approved by the regulatory authorities and will operate according to international guidelines.”

But such assurances by Shell have not deterred action to stop the exploration efforts. In Sgidi village, which is located about 7 200km from the Niger Delta where Shell’s activities have been fingered in contributing to environmental degradation, an air of uncertainty and outrage prevails.

On 5 December residents of Sgidi and other neighbouring villages came in their hundreds, crossing the Mzamba river to join up with other activists along the coast to send a message to Shell and the government.

In reaction to the protests organised by environmental organisations and activists both locally and internationally, minister of minerals and energy Gwede Mantashe lashed out at the organisers describing environmental activism as “apartheid and colonialism of a special type”, saying it deters investors and stalls job creation opportunities.

Mantashe has been accused by community members of using strong arm tactics to force them to accept the proposed titanium mining and now the oil exploration.

On 14 December the Makhanda High Court is set to hear the case brought against Shell. In the matter, Reinford Sinegugu Zukulu, director of Sustaining the Wild Coast, healer Mashona Wetu Dlamini, the Dwesa-Cwebe Communal Property Association, representatives of local fishers and All Rise Attorneys for Climate and the Environment — represented by the Legal Resources Centre and attorney Richard Spoor — are set to argue their case for an urgent interdict.

Meanwhile as the battle continues in the courts, elders like Mnyamane whose brother and uncle were killed during the rebellion in 1961 are downhearted that even under a democratic government by a black majority party, the ANC, people that previously fought against the efforts of white colonial rule, continue to fight off attempts to extract minerals from their land against their wishes.

“The difference between now and 1960 is that then, we would have to resort to violence. The laws have now changed. We would not allow that now, because it resulted in death of many people,” said the silver haired elder whose homestead overlooks the breathtakingly beautiful coastline about 2km away.

“That is what disturbs our souls most: that how can we be in charge of government and turn on each other? A black person is oppressing another. Instead of claiming back our land, we are being robbed of the little good land we are left with,” said Mnyamane.

Mbuthuma was also in his youth during the Mpondo revolt, yet he still carries grim memories of low flying aircraft and people on horseback fighting back. He too expressed disquiet against the current leadership.

“Oliver Tambo and leaders of his time were considerate of the people they led. These ones (current leaders) eat but never get filled up. They are like jackals, all they want is money, they do not care about the well-being of the people,” he said about the late former ANC president who was among political activists to visit the area during the revolt.

In the foreword to a 2011 United Nations Environment Programme’s environmental assessment report into Ogoniland – the agency’s executive director Achim Steiner commented: “The oil industry has been a key sector of the Nigerian economy for over 50 years. But many Nigerians have paid a high price…”

It now remains to be seen what price, if any, the people of the Wild Coast will pay if Shell gets the go ahead to continue its exploration efforts. – news@mukurukuru.co.za